Home Page d'accueil | News & Events | 240th Anniversary of the Independence of the United States of America: Our singers and musicians 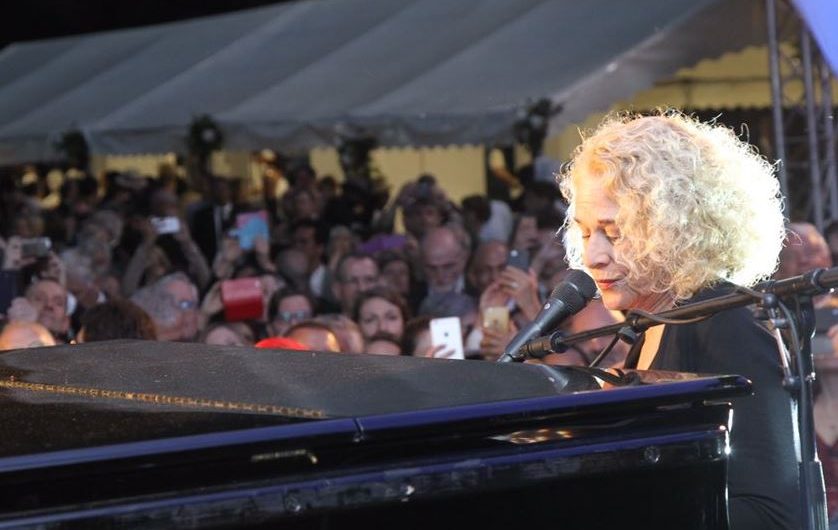 Our Guest of Honor : Carole King

Since writing her first Number 1 hit, “Will You Love Me Tomorrow,” at age 17, Carole King has arguably become the most celebrated singer/songwriter of all time. Born in Brooklyn, King had her first Top 40 hit as a recording artist in 1962, but it was her 1971 solo album Tapestry, that took her to the pinnacle, remaining the top-selling album by a female artist for a quarter century. She was inducted into the Rock and Roll Hall of Fame, and more than 1,000 artists have recorded her songs, resulting in 100 hit singles. In 2012, King was the first female artist to be awarded The Library of Congress Gershwin Prize for Popular Song, and in 2014, her Broadway musical Beautiful: the Carole King Musical, received a Tony award. In 2015, Carole King was a Kennedy Center honoree, which was presented to her by Secretary of State John Kerry.

A native of Roubaix, Carole Merys sings for the Gospel Team choir and is a member of several musical ensembles in Hauts-de-France. Last year, Merys took part in the exchange program Young Ambassadors of the U.S. Embassy Paris.

Nicole Taylor – The Star-Spangled Banner
Born in Los Angeles, Nicole Taylor is a graduate of the Juilliard School in New York. Since her Carnegie Hall debut in 2006, she has won several prestigious awards including the Prix Coup de Cœur du Concours International de Musique de Chambre de Lyon, and first place in the Leontyne Price Competition in the United States. She regularly performs recitals, teaches master classes, and participates in musical outreach initiatives as a Cultural Envoy of the U.S. Department of State.

God Bless America: David Hines
David Hines’ first musical performance was at the age of six. He studied vocal performance at Georgetown University, and for four years, was lead singer of the Forces of Unity in Washington, D.C., touring with the likes of Marvin Gaye, Sly and the Family Stone, and the Manhattans. He was soloist at the Miss Oklahoma Pageant for five years, and was director-producer of daily television for fourteen years. He was also associate pastor for the liturgy of his childhood church in Washington, D.C., and in Fairfax, Virginia. Before moving to Paris with his wife, Ambassador Crystal Nix-Hines, he worked in the financial sector in Los Angeles. In Paris

Sophie Delmas comes from a family of artists: her grandparents were opera singers, so it was natural that she began her studies at the STUDIO DES VARIETES. She released her first single in 1997 entitled “Je le veux” written by Francois Valery. She then turned to musical theater, beginning with Un Conte de Noel in 2001, followed by her role as Aurora in L’Ombre d’un Geant in 2002. In 2003, she acted in Autant en Emporte le Vent as Belle Watling, a role well-suited to her personality. One important introduction around this time changed her artistic career: Pierre Cardin, enraptured by her voice and performance, introduced her to the Saigon Opera where she performed in a grand televised spectacle the song “Bonjour Paris.” The success of this performance is highlighted by her several tours for French Embassies in the Near East as well as in Iceland, as the song is an homage to French culture. She joined the CENTRE DE FORMATION VOCALE de RICHARD CROSS as a Vocal Coach and Acting Instructor. In 2009, Sophie was cast in The Wizard of Oz at Grand Rex, in which she played two witches. The press and audience were astounded by her vocal performance and the quality of her acting. In 2010, Sophie created her own musical theater workshop “En Scene,” and was chosen by Disney producers to double the singing lines of Gothel, the mother in the animated feature film Rapunzel. Since fall 2015, Sophie has played the role of the Queen in the production of The Little Match Girl by the Gymnase theater. A singer coached by Yael Benzaquen, a comedian and dancer taught at the Metz regional conservatory, Edouard began his career in Paris with the Années Twist, at the Folies Bergères. He proceeded to give his voice to Disney for several performances, before crossing paths with Jen-Louis Grinda who cast him as Don Lockwood in Singing in the Rain in 2001, winning the Molière for best musical performance and proceeding on a world tour. His next encounter was with Michel Legrand, for whom he played Andy Miller in The Young Girls of Rochefort at the palais des congrès. He proceeded to espouse the role of Jim Farell in Titanic, directed by Mauri Yeston at the Liège opera. In a few years, he will play lead roles at operas in Toulon, Avignon, nice, or Marseille, in La route Fleurie, Quatre jours à Paris, l’Auberge du cheval blanc, Un de la Canebière. After several months playing Bobinet and Gardefeu in La vie parisienne, he took on the role of train conductor in Louis Chedid’s The rose soldier. After spending a year as Pef in Spamalot, in which he acted and assisted with vocal direction, he took the yellow brick road as the Tin Man in the Wizard of Oz at the palais des congrès. He danced and sang in Singing in the Rain at the Chatelet theater, most recently singing Stephen Sondheim in Passion, next to Natalie Dessay, directed by Fanny Ardant at the same theater.