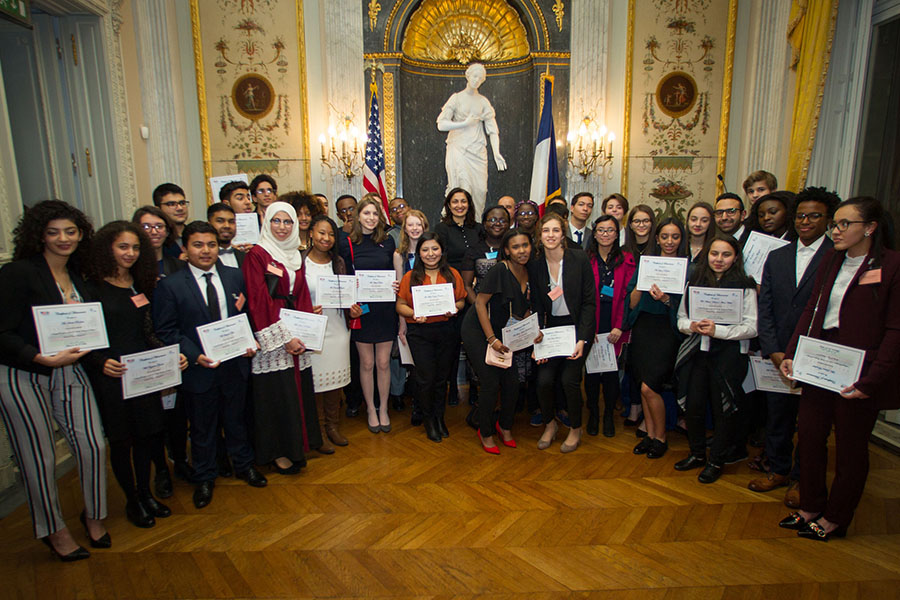 Thirty French and twelve American participants to the Youth Ambassadors for Community Service exchange program attended a reception at the George Marshall Center, on January 20, 2017. They shared their impressions on the program with Chargé d’Affaires Uzra Zeya and French representative (Commissariat général à l’égalité des territoires) Kais Marzouki. During the ceremony, they received official certificates, in presence of their families and teachers.

Twenty-four French high school students and six association leaders traveled from October 20 to November 2, 2016 to the U.S. as Youth Ambassadors. They explored community service in the U.S. and represented France in American institutions and high schools. They visited Washington DC the first week and were immersed in American families and high schools the second week.

The French Youth Ambassadors traveled from six regions to meet in Paris for a weekend of reflection on January 20-22, 2017, during which they attended debriefing sessions.

Twelve American Youth Ambassadors also attended the ceremony. They arrived in France on January 15 and left on January 29, 2017. Thee first week took place in Paris; the second week, they were divided nto three groups which respectively went to Amiens, Lyon and Marseille.

This Youth Ambassadors for Community Service exchange program was initiated in 2008. It became fully bilateral in 2014. It is co-funded by the U.S. Embassy in Paris and the Commissariat général à l’égalité des territoires. It is implemented by the Association for the Development of Citizen. Initiatives (ADICE).