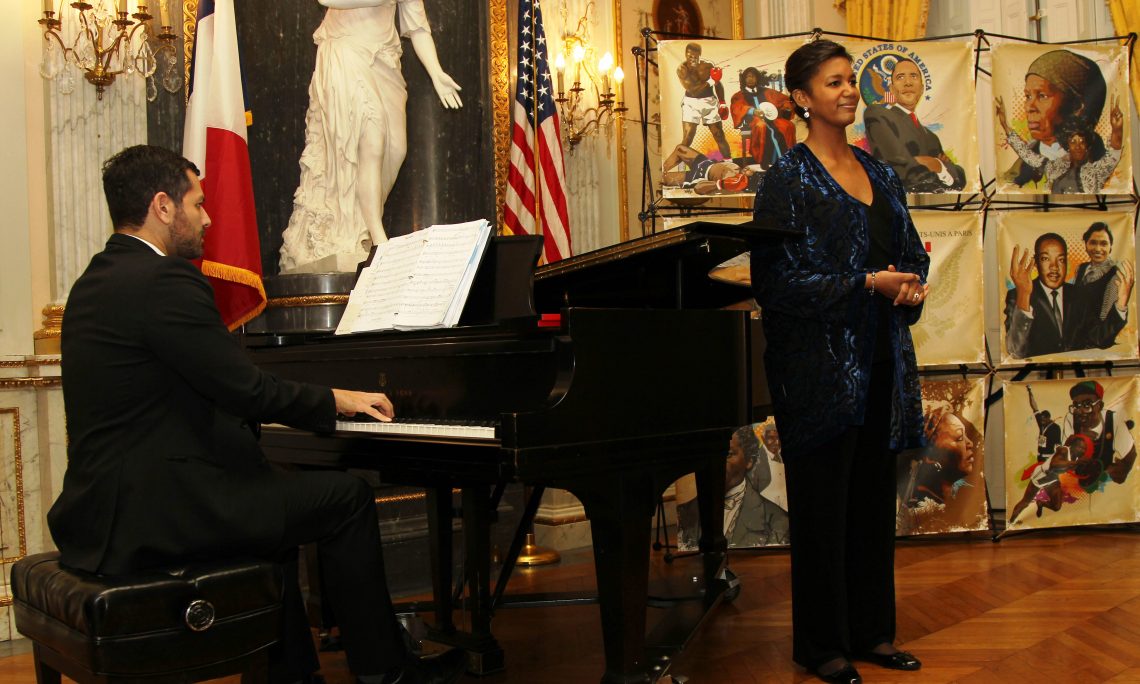 Concert at the George Marshall Center

The U.S. Embassy presented US soprano Nicole Taylor and pianist Daniel Ernst in a series of musical performances and interactive pedagogical concerts incorporating historical information about the birth, development, preservation of Negro spirituals in 19th and 20th century America. Learning and singing songs together, the artists engaged  youth, women groups and general audience in Paris, Rennes, Montauban, and Toulouse.

Spirituals is a musical form indigenous and specific to the religious experience of Africans and their descendants in the United States. An 18th & 19th century precursor to the Gospel music of the 20th century, Negro spirituals are a result of the interaction between music and religion from Africa and Europe. The religious folk songs draw primarily on biblical texts, which are sung in dialect, communicating profound devotion with a surprising simplicity and directness. Their focus on personal freedom makes them universal songs, as everyone on the planet, in one way or another, yearns to be free.

Originally from Los Angeles, Nicole Taylor is a graduate of the Master program at The Juilliard School in New York. She is currently continuing her studies with Vladimir Chernov and Olga Sergeyvna Chernova, in Paris. Since her Carnegie Hall debut in 2006, Ms. Taylor’s extraordinary talent as a vocalist has established her as a world-class performer, having toured from Lithuania to Lebanon, Germany to Jerusalem.  Ms. Taylor has performed numerous roles in many operas, including Le Nozze de Figaro, Les Dialogues de Carmelites, and Porgy & Bess. Her extensive vocal repertoire also includes solo concert pieces such as Strauss’ Four Last Songs and Barber’s Knoxville: Summer of 1915. Following her Carnegie Hall success, she has gone on to win many awards in both international and American competitions, including the Prix Coup de Coeur at the Concours International de Musique de Chambre in Lyon, France and 1st Place at the Leontyne Price Competition Nationals in Atlanta, Georgia.

Daniel Ernst graduated from Carnegie Mellon University with honors, where he earned a Bachelor of Fine Arts in Piano Performance and a Master of Arts and Non-profit Management. As an undergraduate, he studied piano under Enrique Graf and Earl Wild, while also pursuing a certification in Dalcroze Eurhythmics and obtaining a certificate in Piano Pedagogy under the tutelage of Hanna Li. Daniel has taught at the prestigious Carnegie Mellon Preparatory School, sung with the Pittsburgh Opera Chorus, and served as a church pianist and cantor in various places across the United States. In 2001, Daniel became a diplomat with the U.S. Department of State, however he has continued to perform in the international area, including in Germany, Morocco, Tunisia,  Jordan, Qatar, the United Arab Emirates, Jerusalem, Hungary, Slovakia, Austria, and the Czech Republic as part of American cultural diplomacy programs. Daniel currently resides in Prague, Czech Republic where he is the U.S. Embassy’s Press Attache.