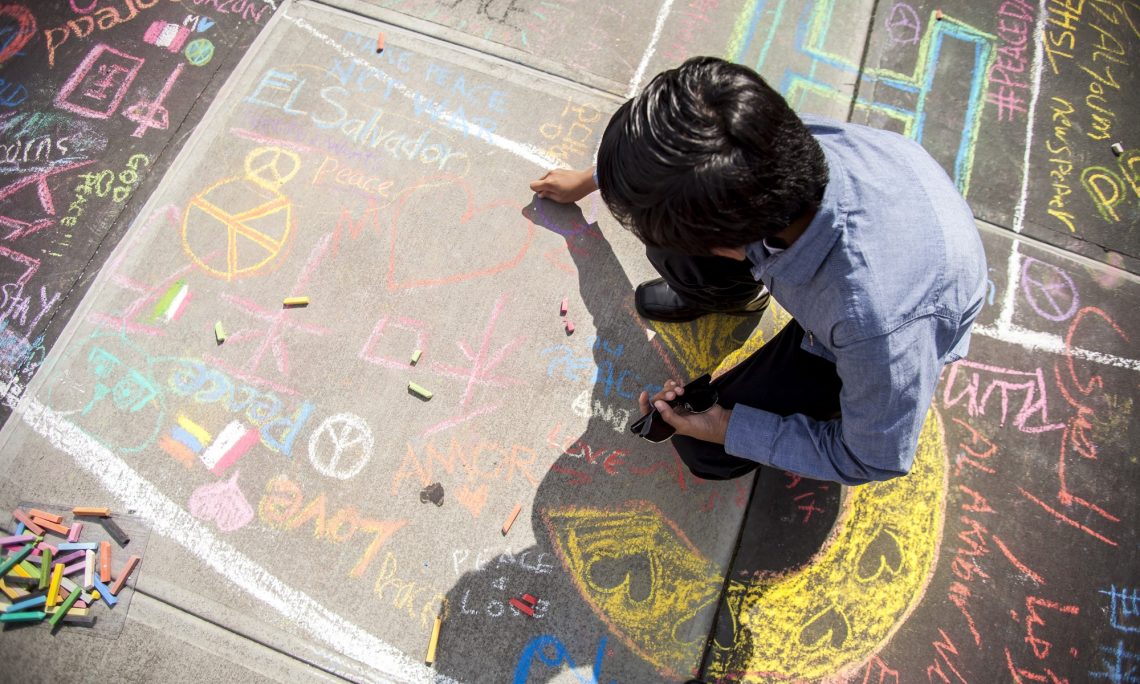 A young man leaves a message for peace, as a part of the global CHALK4PEACE art project, which was at UN headquarters during UNGA this week, for the observance of the International Day of Peace. [UN Photo]

AsPresident Obama attends his last United Nations General Assembly (UNGA) this week, we are honored to join him in New York to meet with government leaders, youth activists, and change-makers from around the world to discuss how we can come together to resolve some of the most pressing challenges of our time. Over the past year, under the leadership of the President and Secretary of State John Kerry, the international community, including the United Nations, has increasingly recognized the importance of engaging global youth as partners in peace, security, and preventing and countering violent extremism.

At this UNGA, the U.S. government will build upon its commitment to engage global youth as partners for peace by finding new ways to amplify their voices and partner with governments on shared challenges.

On September 22, the U.S. State Department and Search for Common Ground will host a unique, two-hour event in New York to discuss the relationship between youth and governments with regards to CVE and share ideas to strengthen that relationship. This event, entitled, “CVE Reimagined: Youth and Governments Unite Against Violent Extremism,” will feature an impressive panel of youth and government leaders.

The panel will discuss examples, approaches, and tools to further increase youth-government collaboration to address violent extremism. The event will also consist of small group discussions among youth, civil society, and government leaders to generate ideas and recommendations for CVE collaboration. An action strategy outlining key findings from the event will be produced as a deliverable.

Earlier this week, we partnered with Facebook, and EdVenture Partners to host a special presentation of the Peer-to-Peer (P2P): Challenging Extremism program on September 21. P2P is a global university competition in which students create social and digital media campaigns to counter online hate and extremism. This event featured campaigns from five global P2P teams in additional to government and private sector partners.

Given the adoption last December of UN Security Council Resolution 2250 on Youth, Peace, and Security and the UNGA’s recent endorsement of the numerous recommendations of the Secretary General’s Plan of Action to Prevent Violent Extremism, this discussion could not come at a better time.

We look forward to meeting youth leaders from around the world who continue to work courageously in their communities and countries to advocate for peace and push back against recruitment and violent extremism by terrorist organizations.

From our diplomatic engagement in various places around the world, from Brussels to Paris, and Dhaka to Nairobi, we have seen the power of youth to unite and enact change in their communities.

As Secretary Kerry has said, “to defeat terrorism, we have to act globally and locally, and we have to understand that we each have a responsibility to do everything that we can.”