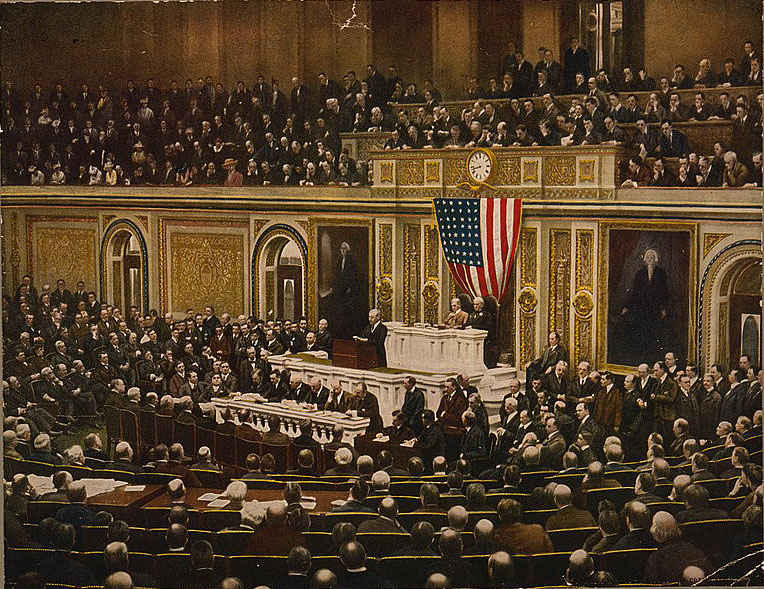 Congress declared war on Germany on April 6, 1917, formally bringing the United States into World War I, a conflict that had been ongoing for nearly three years. When the war began in 1914—pitting the Allied powers of France, Great Britain and Russia against Germany, Austria-Hungary and the Ottoman Empire—most Americans simply wanted to keep out of the conflict.  The fighting was taking place oceans away, and since the United States was not directly threatened, many Americans felt there was little to gain by entering the war. The American diplomatic perspective of avoiding “entangling alliances,” which had existed since the founding of the United States, supported that mindset.

Nevertheless, nearly 14 million Americans were immigrants, and many had vested interests in European events. Jewish-Americans from eastern Europe despised the Russian Tsar, while Irish-Americans distrusted Great Britain. Thus both were suspicious of the Allies. German-Americans wished the United States to remain neutral. Americans with connections to England, France and Italy, favored the Allies, as did immigrants from ethnic enclaves under the rule of Austria-Hungary, believing that Allied victory might assist in freeing their homelands.

Cultural and ethnic perspectives were not the only driving factors in the lead-up to America’s entry into the Great War. Many Americans viewed the British, French and Russians as imperialist powers, little different from the Austro-Hungarians, Germans and Turks. Pacifists thought war itself was evil, and were influential in both religious and secular communities. Labor leaders and poor farmers thought World War I was a “rich man’s war” that had become a “poor man’s fight”. Former president Theodore Roosevelt and other Anglophiles, on the other hand, courted an alliance with Great Britain, advocated military preparedness, and sought a prominent U.S. position on the world stage. Internationalists like President Woodrow Wilson were more temperate. They opined that the United States might play a role in negotiating a peace that could advance the interests of both democracy and liberal capitalism.

While the United States officially remained neutral, public opinion soon tilted against Germany. They invaded neutral Belgium as the war began, and committed atrocities there. Germany’s introduction of gas warfare and use of Zeppelins to bomb cities garnered unfavorable press coverage as well. Some Americans found themselves anxious to join the fight against the “Hun”.

Volunteers found their ways into service in British, Canadian, French and other armies, and they swarmed to serve in the French Foreign Legion. (The Legion offered a way to retain U.S. citizenship, since volunteers swore allegiance to the Legion rather than to France.) This in turn became a recruiting ground for famous American-manned organizations such as the Lafayette Escadrille and Lafayette Flying Corps. Other Americans served as civilians in the American Red Cross, Norton-Harjes Ambulance Service, and similar organizations. These volunteers became newsworthy, the subjects of poignant and thrilling accounts from the front. Their service and sacrifice inspired neutral American observers to become supporters of the Allied cause.

In the early stages of the war, Great Britain and Germany had both imposed naval blockades, but in very different ways. The British blockade was traditional, intercepting ships on the surface and assuring the safety of their crews. The Germans relied on submarines, which had strong incentives to strike without warning due to vulnerability when they surfaced. The United States almost went to war with Germany after the May 1915 sinking of the RMS Lusitania, where 128 American lives were lost. Further sinkings and American protests followed, but in time Germany relented rather than go to war with the United States. Germany promised not to attack passenger vessels, and to assure the safe evacuation of crews from other ships. At the time this move placated the United States.

President Wilson attempted to broker a negotiated end to the war, with little success. To avoid provoking the Germans and in part for budgetary reasons, Wilson’s government kept the American armed forces weak. The Army remained pitifully small, and Navy ships were undermanned and undertrained. Making points with both pacifists and those preferring neutrality, Wilson was re-elected in 1916, due in part to his isolationist platform and the campaign slogan “He kept us out of war.”

By early 1917, changes on the world stage no longer allowed the United States to remain neutral. The Russian Empire was on the verge of collapse, and the Germans, who were desperate after years of war and the English blockade, saw a way to victory. Germany believed unrestricted submarine warfare would defeat Great Britain before the unprepared U.S. armed forces could effectively intervene, and resumed it on February 1, 1917. The Germans also attempted to conspire with Mexico against the United States with the infamous “Zimmermann Telegram”. Intercepted by the British, news of the telegram was published in the American press on March 1, followed by the sinking of five American merchant ships later that month. Already morally supportive of the Allied cause, these German actions outraged the American public. The United States had reached its tipping point.

President Wilson asked Congress for a Declaration of War, and got one on April 6, 1917. Wilson characterized the war he had tried so hard to avoid as a “war to end war” and an endeavor to “make the world safe for democracy”. The American people had come together to support this great endeavor, and were more united than ever before.  E pluribus unum.