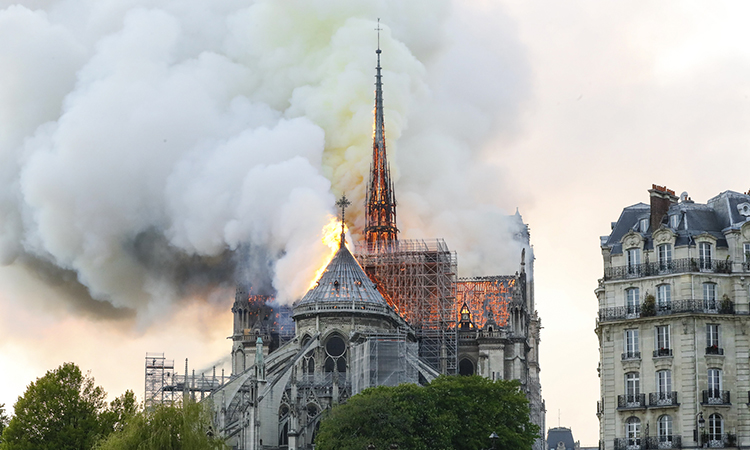 Plumes of smoke and flames rise during a fire at the landmark Notre Dame Cathedral in central Paris. (© Francois Guillot/AFP/Getty Images)

President Trump, traveling in Minnesota to deliver an economic speech, expressed his sorrow to the people of France today, after learning of the fire in the iconic Cathedral of Notre Dame in Paris.

There “is no cathedral in the world like it,” Trump said, noting that he had visited the magnificent church many times. He said the damage to the church “is a terrible sight to behold.”

Vice President Pence conveyed the thoughts and prayers of the American people to the “firefighters … and all the people of Paris” in a statement on Twitter, recognizing that Notre Dame is “an iconic symbol of faith to people all over the world.”

“My heart breaks for the people of Paris after seeing the fire at Notre Dame Cathedral,” first lady Melania Trump said. “Praying for everyone’s safety.”

Located on the Île de la Cité in Paris, the cathedral has long been celebrated as a masterpiece of Gothic architecture. Its first stones were set down in 1163 C.E., and the building has been refurbished over the years. “It is one of the great treasures of the world,” Trump said.