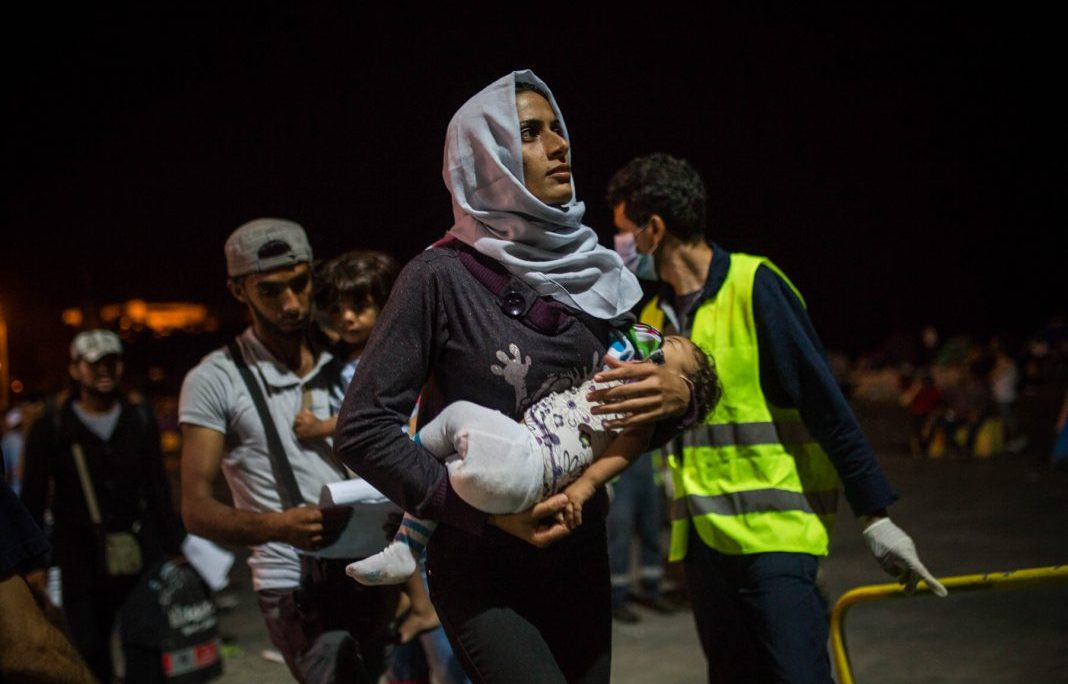 MR TONER: Hey. Happy Tuesday. Welcome to the State Department. So before I get to your questions, I just – we have with us today Assistant Secretary for the Bureau of Population, Migration, and Refugees Anne Richard here to talk a little bit about humanitarian assistance to Syrians as well as refugees.

So without further ado, Anne, thank you.

ASSISTANT SECRETARY RICHARD: This mine?

In his remarks, the President said that in the face of a displacement crisis unlike any we have seen since World War II, “as Americans, we’re determined to do our part.” We have been working hard all year to increase our own refugee admissions, and I am pleased to report that later this week we will meet our goal of welcoming more refugees than we have in the last 15 years. We are honored to provide a fresh start to nearly 85,000 of the world’s most vulnerable people.

Today, I am proud to announce that the United States is providing more than $364 million in additional lifesaving humanitarian assistance for those affected by the war in Syria. This new funding brings U.S. humanitarian assistance in response to this conflict to over $5.9 billion since the start of the crisis. Faced with the unprecedented scale of tragedy and human suffering that Syrians have endured for more than five years and continue to endure today, this announcement reflects the immense generosity of the American people. It will support desperately needed food, shelter, safe drinking water, medical care, and other urgent help to millions of Syrians and refugee-hosting communities.

But getting help to people who desperately need it requires access. The Assad regime and its backers have the ability to allow the United Nations and other humanitarian relief organizations to do their work. Instead of helping, Russia and the Assad regime are bombing humanitarian convoys, hospitals, and first responders trying desperately to keep people alive. The regime denies safe passage for humanitarian convoys, removes medical supplies from UN deliveries, and slashes the overall amount of aid. This is unacceptable.

We reiterate our call for sustained and unimpeded humanitarian access to Aleppo and to all those in need throughout Syria and around the region. We recognize that along with emergency relief, we must address the long-term development needs of Syria’s neighbors. And the funding we are providing will continue to support communities in neighboring countries that have so generously hosted Syrian refugees. The United States maintains a strong commitment to assisting those in need around the world, including the millions of Syrians forced to flee their homes in this tragic conflict.

That’s the statement there.

MR TONER: Thanks so much. Anne can take some of your questions if you have any.

QUESTION: Okay. Can – do you have an updated number on what that will be by the end?

ASSISTANT SECRETARY RICHARD: Yeah, it’s going to be close to 12,500.

QUESTION: Okay. So you actually exceeded the —

QUESTION: — the President’s goal. And is it possible – maybe not immediately now, but to get a breakdown of where the others, at least by region, are from? I know that –

QUESTION: Just so we can – were there any others that exceeded the – kind of the target?

ASSISTANT SECRETARY RICHARD: What we do is we consult once a year with Congress, and we have an overall total that’s a ceiling.

ASSISTANT SECRETARY RICHARD: And then we say how much per region, and then we have an unallocated amount left over. And so we use the unallocated to make sure that if we have one from any particular part of the world, we can fit them within that subpart of the ceiling.

ASSISTANT SECRETARY RICHARD: But we can get you those numbers.

QUESTION: Thanks. And then on the money, the $364 million that you’re announcing today – where – is this being taken from some other account?

ASSISTANT SECRETARY RICHARD: No. This is money that we were provided by Congress for the year, and this is probably our last contribution – our last announcement of the fiscal year towards Syria.

QUESTION: Okay. So when you say the year, you mean the one that ends on five – four days?

QUESTION: And then do you have – the 5.9 billion total since the start, which is quite a bit of money, that goes to – where does that mostly go to? To the UN?

ASSISTANT SECRETARY RICHARD: A lot of it goes – is spent through the United Nations humanitarian agencies. So our big partner is the UN agency – High Commissioner for Refugees, but also World Food Program; UNICEF; UNFPA, UN Population Fund. And it also goes through nongovernmental organizations that are working in the region.

QUESTION: But most of it goes to people who are actually outside of Syria, correct?

QUESTION: Okay. Where – how does the —

ASSISTANT SECRETARY RICHARD: Of the amount we’re announcing today, three quarters will go inside Syria. And generally, it’s been about half and half.

QUESTION: I have one more.

MR TONER: Go ahead, Nike, and then I’ll get to you.

QUESTION: Yes, thank you. So does the new funding include the funding for ERCM program? And if you could please elaborate on that program, does that help to encourage countries such as Mexico and Ethiopia to take in more refugees? And in your estimation, how effective is that program to address the refugee crisis?

ASSISTANT SECRETARY RICHARD: Well, this is a new program. It’s certainly a part of an overall approach to addressing the refugee crisis. It was put together in the lead-up to the President’s summit, the Leaders’ Summit last week, and it’s – we are providing $11 million to help start it to the International Organization for Migration and the Office of the UN High Commissioner for Refugees, because this will be a joint mechanism. So it’s the Emerging Resettlement Countries Joint Support Mechanism.

And what we found was that in asking countries to begin resettlement programs, to think about accepting refugees, they said they could think about it but they would need some help. And so this fund was set up to cover the costs of screening refugees and the transportation to get the refugees to these new resettlement countries.

QUESTION: So just to clarify, out of 11 million of the new funding goes to this program?

ASSISTANT SECRETARY RICHARD: Eleven million of funding that we have, separate from the funding for Syria – so it’s not part of the 364 million – 11 million from our bureau’s funding will go to this new program.

QUESTION: If I may, I would like to also ask another question. With the surge seen in Jordan earlier this year to process Syrian refugees, you’ll repeat it in FY2017?

ASSISTANT SECRETARY RICHARD: We’ll look at different options to proceed towards that new goal of 110,000. One option would be potentially to repeat the surge. I think the surge worked last year, but it should not become a routine way of our vetting process. We’d like to be able to do this in our existing routine operations during the course of the year.

QUESTION: Can I just ask – from Bloomberg News. Can I just ask on the 10,000 or 12,500 figure for Syria, is there any plan to increase that number in the next fiscal year? And also, is the U.S. reconsidering its vetting procedures for Syrian refugees in light of concerns expressed by Donald Trump and others that U.S. vetting is insufficiently rigorous?

ASSISTANT SECRETARY RICHARD: We don’t have a target number for number of Syrians for next year. This Administration has been very clear that we want to bring more Syrians, so my own guidance to our staff is that we want to bring even more than we brought this year without having a target.

Our vetting is extremely rigorous and careful, and it’s been gone over now for months by a lot of colleagues and analysts. And so it’s the most careful way of bringing anyone into the United States of any visitor to the United States, so we have great faith in it to screen out people who don’t belong in the program.

QUESTION: So can I just ask you, given your role, what your response was to Donald Trump, Jr.’s comparing refugees to Skittles?

ASSISTANT SECRETARY RICHARD: Did he do that?

ASSISTANT SECRETARY RICHARD: I’m not paying attention to the election.

QUESTION: I wonder on the 12,500 if you’ve had any difficulty in finding places within the United States and so many governors are saying they don’t want to have Syrian refugees. And then secondly, you were up on Capitol Hill recently talking about – I know not the number of Syrians, but increasing the overall number to 110,000. I wonder what kind of reception you got up there.

ASSISTANT SECRETARY RICHARD: So on September 13th we went up for our annual consultation with Congress. I would say we got a mixed reception. We got a lot of questions about the vetting process, which continues a conversation we’ve been having since last fall, and also questions about a lot of the basics of the program, of how well refugees do once they get to the United States. And we think we have a very good story to tell about that. Refugees tend to be very successful once they get to the U.S. – not in the short term, but definitely in the medium and longer term. And of course, small kids become Americans fastest of any member of the family.

What was the first part, Michele?

QUESTION: About resettling Syrians into different states when there’s so many restrictions that governors are placing on that.

ASSISTANT SECRETARY RICHARD: Well, this is a federal program, and so we have 180 cities across the United States where we currently resettle refugees and that list is likely to grow in the coming months. We have a lot of municipalities stepping forward and expressing an interest in resettling refugees.

Yeah, so I’m – I think the United States can accept lots and lots and lots of refugees and provide a home for them. The thing that’s – in some ways limits the number we bring in is that this careful vetting process we have, this careful system that we run to bring people in where we have to review their personal stories, make sure that their histories stand up to scrutiny, and make sure we screen out anyone who’s up to no good. But in terms of the ability for American cities to welcome people, there’s a great deal of receptivity to having refugees in cities and towns across the U.S.

QUESTION: But you did this year.

QUESTION: So – but not next year?

ASSISTANT SECRETARY RICHARD: The President set that. So it’s not a normal thing to do. I don’t know if the President will want to do that in the next few months or if a new administration would want to do that. Certainly, we’ll all be tracking it very carefully.

QUESTION: So it may be left to the next administration is what you’re saying.

ASSISTANT SECRETARY RICHARD: I think a president at any time can look at the numbers and establish a goal for us. The ceiling – the 85,000 this fiscal year and 110,000 next fiscal year, that’s a statutory requirement. But the number – the 10,000 that we exceeded this year, that was just a – sort of an internal challenge for the Administration.

MR TONER: Thank you so much, Anne.