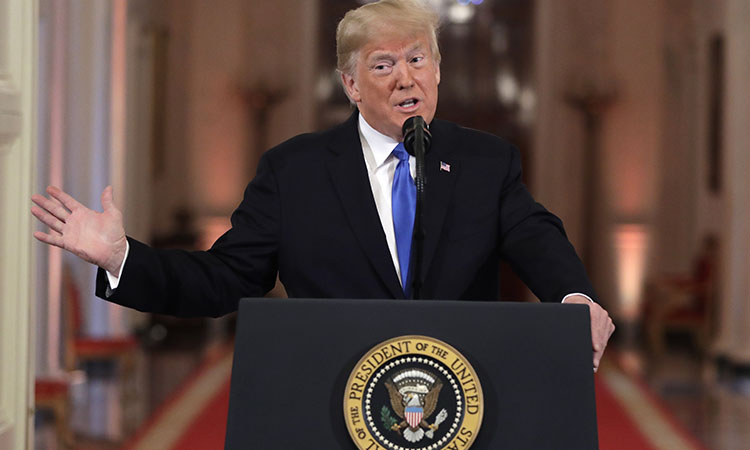 MR. MARQUIS:  Hey guys, this is actually Garrett Marquis, NSC spokesman.  I just wanted to set some ground rules before I hand it over to [senior administration official].

Just so we’re all clear, this is on background to a senior administration official.  It’s also, as the moderator indicated, embargoed until 3:30.  If you have any questions, you can follow up with me or my colleague.

In the meanwhile, we’ll hand it over to [senior administration official].  He’s with the Eurasia Directorate.  He’s going to walk through some of the agenda items as well as the main messaging and points of this trip.

SENIOR ADMINISTRATION OFFICIAL:  Thanks, Garrett.  So, I’ll start with just kind of an overview of the visit and then go through some specific elements of the agenda.

So the President will be traveling to Paris this weekend.  The primary purpose of the visit is to participate in the Armistice Day Centennial Commemoration that will take place on November 11th.

This is a historic opportunity to honor the sacrifices of those who gave their lives for our freedom in that struggle.  The President’s participation in these events will also serve as the reminder of the important role that the United States has played and continues to play in ensuring peace and security in Europe.

In recognition of our own Veterans Day holiday, the President will participate in an event to honor the service of the men and women who defend our country in uniform, and he will also have an opportunity to continue bilateral discussions with President Macron of France.

So just to go step by step through his itinerary, on Saturday, November the 10th, he will have a bilateral meeting with President Macron.  Then the President will visit the Belleau Wood battlefield and also the American cemetery that is adjacent to the battlefield.

Later that afternoon, he’ll have an opportunity to do a meet-and-greet session with members of the U.S. Embassy in Paris.  And then, that evening, President Macron is hosting a dinner for the visiting heads of state and government.

On Sunday, the President will participate in the Armistice Day memorial event that will take place at the Arc de Triomphe.  That will be followed by a lunch hosted by President Macron for the heads of state and government at the Élysée Palace.

Following that event, the President will participate in a Veterans Day ceremony at Suresnes American Cemetery.  And that will conclude the program and he’ll depart back en route to the States.

I think I’ll conclude there and subject to your questions.

Q    Hi there.  It’s Jill Colvin from the Associated Press.  Two questions for you.  Firstly, is the President planning any other bilateral meetings on Saturday?  He spoke today about how he and Putin would both be attending that lunch.  What exactly is the plan for their conversation there?

And number two, why is this conversation on background?  I haven’t heard anything here that sounds sensitive to any kind of national security issues.  Thank you.

SENIOR ADMINISTRATION OFFICIAL:  Let me jump in and add to that.  The lunch is a widely gathered lunch with other leaders that are attending the event.  There’s nothing that’s right now planned or expected to be planned, or any set of pull-asides or exchanges.

In addition, to answer your question about why this is on background — that’s just a kind of — since I’ve joined the NSC, it’s kind of the expectation for how these operate.  I think this was the exact same for the President’s last trip to Europe.  It started off at least on background.

So with that though, of course if you follow up with us, and we can try to help you out.  But maybe we’ll jump to the next question.

Q    Hi, this is Kyle Mazza from UNF News.  Thanks so much for taking my question.  I just wanted to ask, regarding the bilateral meetings, what does the President and Macron plan to talk about while they meet?  And can you give us an overview of what the President will say when he visits Suresnes?  Thank you.

SENIOR ADMINISTRATION OFFICIAL:  With respect to the President’s bilateral meeting with President Macron, of course, I cannot specifically anticipate exactly what they would discuss.  But as you can imagine, some of the shared interests that could come up would be the situation in Syria, the threats posed by Iran, European security.

With respect to the President’s participation in the Veterans Day event the afternoon of November 11th, I think it would be a traditional Veterans Day remarks that are focused on remembering and honoring the service of men and women who defend our country, not only during World War I, but, you know, through the years and today, as well.

Q    Hi, this is Anne Gearan with the Washington Post.  In addition to the issues you said might come up in the meeting with President Macron, can you say whether you expect the President to either raise trade issues himself, or that he is expecting to have them raised by Macron or others he may encounter during these two days?

SENIOR ADMINISTRATION OFFICIAL:  I cannot say whether the President will raise it or whether we necessarily expect the French side to raise it.  I can say that it is a topic that frequently comes up in conversations at this level, and it’s something that we are engaging not only the French, but the European Commission and European Union on.

MR. MARQUIS:  Great.  Thank you everybody.  We appreciate it.  Please be in touch if you have any follow-up questions.