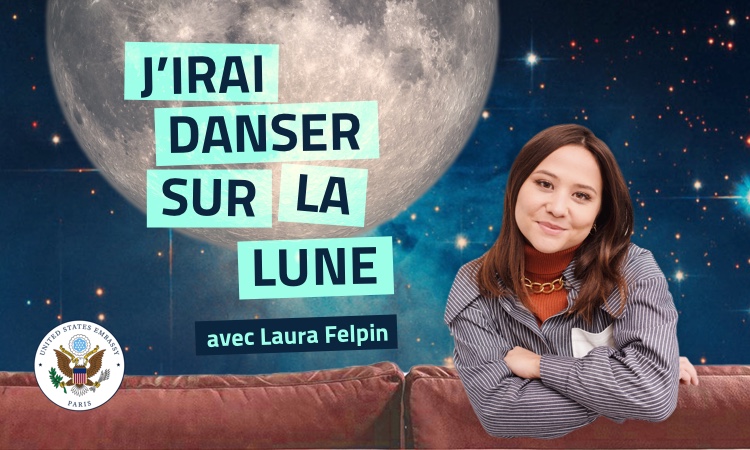 The U.S. Embassy in France is pleased to invite you to a party on the Moon.

J’irai danser sur la lune is a 10-episode podcast in French in which actress Laura Felpin sets out to throw the best party ever… on the Moon. In each episode, Laura will figure out how to make her fantastical plan a reality by examining real-life emerging technological and societal challenges and consulting with French and American experts working to solve them.

How will Franco-American collaboration help Laura to plan her lunar dance party and shape our shared future? Listen now to find out!

New, free episodes released every Tuesday starting May 25th, available here and on all podcast platforms.

Going to the moon isn’t accomplished with just a snap of your fingers. To succeed in an expedition of this scale you have to take into account many, many elements. Laura doesn’t really know where to start her to-do list. But is it really possible to imagine living on the moon one day? What would an extraterrestrial residence look like? How will we make a dance floor? In this episode, Laura Felpin receives input from Romain Charles, an expert at MEDES (Institut de Médecine et de Physiologie Spatiales) of which CNES (Centre National d’Etudes Spatiales) is a member, Travis Murphy, head of government relations for the NBA, and finally Barbara Belvisi, founder of Interstellar Lab, a startup whose purpose is to invent habitats for space.

You can’t have a party without music! But what might music look like in several decades? What will be the perfect activity to entertain guests? What is the future of entertainment and gaming? In this episode, Laura Felpin receives advice and musical predictions from Josselin Bordat, author and composer specializing in electronic music, Travis Murphy, head of government relations for the NBA, and Célia Hodent, doctor of psychology and specialist in video games, who notably participated in creating the game Fortnite.

To party, on Earth, on the Moon or on Mars, you have to cultivate your outfit. But what can we expect from fashion in the decades to come? And how will it deal with the technical constraints of life in space? Between craft and new technology, how will fashion evolve? In this episode, Laura Felpin calls again on Barbara Belvisi, founder of Interstellar Lab, to tell her about the technical constraints in terms of clothing on the moon, and talks to Rebeccah Pailes-Friedman, a brilliant professor of design at the Pratt Institute in New York who works on smart textiles and connected clothing, as well as Mossi Traoré, a young French designer, winner of the Pierre Bergé 2020 Prize and founder of the fashion school Les Ateliers Alix.

To organize a party, you often have to ask for authorization. Does Laura really have the right to organize a party on the moon? Who owns the moon? Who should she contact? Is there such a thing as space law? In this episode, Laura Felpin hears from Gabriel Swiney, attorney and chief legal advisor to the U.S. government on space-related issues, and Barbara Belvisi, founder of Interstellar Lab. She also talks with Michel Viso, head of exobiology and planetary protection programs at CNES.

If there’s one thing that doesn’t change on Earth or in space, it’s the need and the pleasure of eating. But the space environment is full of constraints. And according to the astronauts, freeze-dried food… it’s really not 5 stars! So, what should we do for the party? Do we eat fermented vegetables? Make edible packaging? Is veganism the future? In this episode, Laura Felpin calls Thomas Chisholm, French-American chef and Top Chef contestant, Interstellar Lab founder Barbara Belvisi, and Ariel Ekblaw, founder and director of the MIT Space Exploration Initiative.

While Laura pursues her lunar (but not too outlandish) organization, she worries about the environmental impact of her adventure… to the point of questioning everything. In order to clarify her doubts, she contacts Michel Viso, exobiologist from CNES, Ariel Ekblaw, founder and director of the MIT Lab and Fatoumata Kebe, astrophysicist specialized in space debris.

As the party on the Moon approaches Laura will have to choose the lucky ones who will be invited to come with her. What if she used an algorithm to select them! But then what criteria will she have to program? With the added question about security in space, we have a lot of work to do! In this episode, Laura Felpin talks with Florent Kirchner, cybersecurity expert at the CEA, and Jessica Tok, Space Policy Analyst, at the U.S. Secretary of Defense (Pentagon)

Now everything is ready, or almost… Laura Felpin wants to emphasize diversity for her party on the Moon. Using the determination she is known for, Laura seeks to involve people from all walks of life in her adventure! In this episode, Laura Felpin interacts with the astronomer Fatoumata Kebe, Jean Guo, entrepreneur and founder of Konexio and two specialists attached to the White House who work in issues related to science, the future and representation, Dr. Nelson, Deputy Director of the Office of Science and Technology Policy, and Dr. Jedidah Isler, astrophysicist and in charge of issues related to diversity in the same office.

This is the final podcast episode to end our series! Laura looks back on this lunar quest and receives a special message… from John Kerry himself! But even if such an adventure now seems feasible, it’s worth remembering that for the moment, the most important thing is to be able to continue partying on Earth and taking good care of it! But fasten your seatbelts, Laura is taking us all to party on the Moon!
Finally, Laura reveals the existence of a hidden game in the podcast. But who will be able to solve the mystery and find the phone number to get on the guest list? The first ones to find it will receive little surprises… Feel free to join or be inspired by the discussion on Discord about the game: 𝐉’𝐈𝐑𝐀𝐈 𝐃𝐀𝐍𝐒𝐄𝐑 𝐒𝐔𝐑 𝐋𝐀 🌙