The U.S. Consulate in Strasbourg was established in 1866. Its establishment was aimed at encouraging bilateral political, commercial, and cultural exchanges between the region and the United States. Promoting American business interests was another goal.

Successive wars and annexations in the region Alsace-Lorraine were responsible for the relocations and closing of the Consulate, but they did not diminish American interest in the region.

The annexation of Alsace and Moselle in 1871 led to the closure of all foreign diplomatic missions established in Strasbourg, including the American Consulate. As a result, the United States moved its consular activities in the region to Kehl, Germany, until 1919, when, after WWI, the U.S. Consulate returned to Strasbourg.

The U.S. Consulate in Strasbourg closed again in 1939, due to the anticipated re-annexation of the city and the region by Nazi Germany. It re-opened in 1946 after WWII in Strasbourg and has not stopped its activities in the region since then.

The history of the U.S. Consulate General in Strasbourg, raised to this diplomatic rank in 1966 (one hundred years after its creation), has been affected first by regional history and the border shifts that have defined its evolution. Second, it has also been influenced by the development of European institutions in Strasbourg during the decades after the creation of the Council of Europe in 1949. 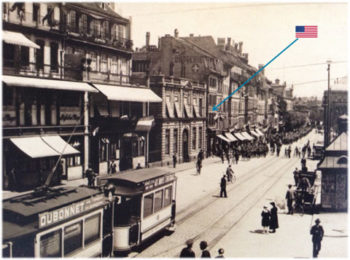 The role of the U.S. Consulate General in Strasbourg has greatly evolved over time, according to the history of the city and the Alsace-Lorraine region. However, it has always worked to carry out its key mission: Provide American citizens who are living in its consular district with routine consular services and emergency services when needed.

This is how the U.S. Consulate General today, and since 1952, after several relocations in Strasbourg and between Strasbourg and Kehl, welcomes American citizens at 15, Avenue d’Alsace, just around the corner from the Place de l’Université and within walking distance to the Council of Europe.

Strasbourg has been an important Rhine port for almost 2,000 years. Originally a Roman town, Argentoratum (dating from before 12 AD), it became the Frankish Strategurgum in the 5th century. Later, “Strassburg” was an Imperial Free City under the Holy Roman Empire. The city became French in 1681 under Louis XIV, when the whole Alsace region became French due to the signing of the treaty of Westphalia in 1648. After the Franco-Prussian war in 1870, Germany annexed Alsace and Moselle. At the end of World War I, the city became French again in the year 1918. Annexed again by Germany during World War II, Strasbourg was liberated from German occupation on November 23, 1944 by General Leclerc’s French 2nd Armored Division.

Strasbourg has rich and varied historical traditions and monuments, including the single-spired Strasbourg Cathedral, one of the most beautiful in Europe. For 400 years, the Cathedral was Europe’s tallest landmark.