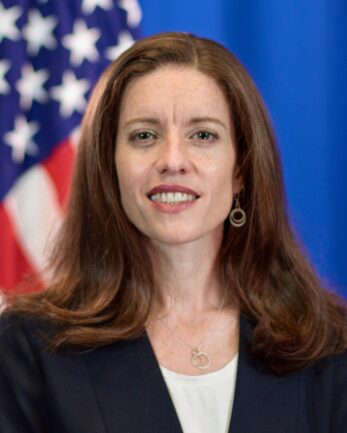 Darragh Paradiso assumed her duties as the Consul General of the United States of America in Strasbourg in August 2020. She and her team represent the United States in the Great East region of France, and Ms. Paradiso serves as Deputy Permanent Representative to the Council of Europe.

Ms. Paradiso has been a member of the U.S. Department of State’s Foreign Service since 1999. She has worked on a wide range of political and public affairs across Asia and Africa, with a particular focus on freedom of expression. Most recently, she served as Director of Public Affairs at the U.S. Consulate General in Hong Kong, where her team built connections with local audiences through strategic communication, cultural programs, academic exchanges, and promotion of U.S. higher education.

In Washington, DC, Ms. Paradiso was the Director of the Office of Public Affairs in the State Department’s Bureau of East Asian and Pacific Affairs. Overseas, she was posted in: Libreville, Gabon; Addis Ababa, Ethiopia; Beijing, China; Windhoek, Namibia; and Guangzhou, China. She graduated from Swarthmore College and holds a Master in Public Policy from Princeton University. She speaks Mandarin, German, French, and some Cantonese. A proud Oregon native, Ms. Paradiso loves cooking, reading, and hiking with her family. Her first name rhymes with Sarah.