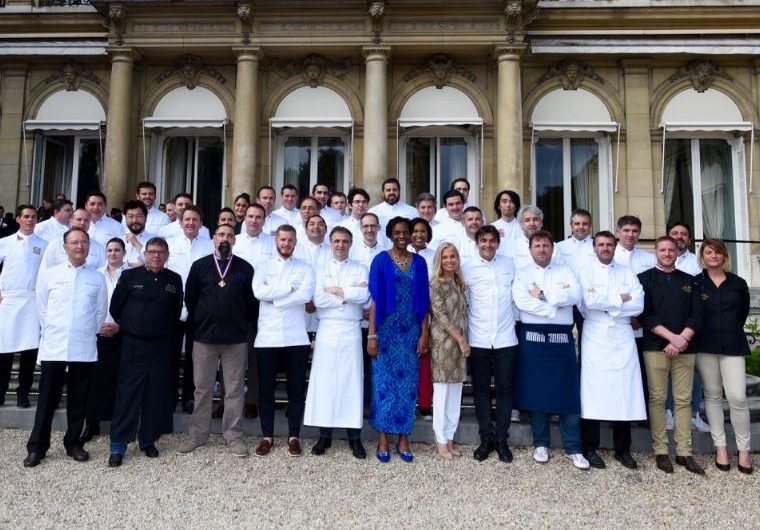 For the 240th Anniversary of the Independence of the United States of America, Ambassador Jane D. Hartley hosted a number of the best French chefs, bakers, MOFs and artisans to cater the event. As a demonstration of French-American friendship, French cuisine served as its own kind of ambassador, representing the links that bring the two countries together. Many Michelin-star chefs, decorated bakers, MOFs and artisans brought their talents and offered the best of French gastronomy. Each chef prepared dishes from American products, such as Maine black angus beef or Alaskan seafood. The products used were emblematic, giving the food a distinctly American touch. The MOFs across many culinary disciplines demonstrated the extent of their skills throughout the night. Cadoret oysters prepared by Marcel Lesoille, Alaskan salmon used by Sophie Fernandez and Jonathan Buirette (MOF 2015, assisted by MOF Sebastien Brandin), and many variations of the two elements.

The hotel schools Ferrandi and Santos Dumont also provided their valuable assistance throughout the event.

This young chef, 28 years of age, Jaïs Mimoun, used his name for the restaurant that he opened with his brother, just steps from the Quai d’Orsay in Paris. After training at the Médéric School, he worked with Eric Fréchon at the Bristol Hotel, then became the chef at Le Petit Tonneau. He then started his own restaurant, Le Petit Célestin, again with his brother.

Michel Roth —
Born in Lorraine, Michel Roth is the most decorated chef in France. He joined the Ritz Hotel in 1981, where he spent most of his career, aside from a stint at the Lasserre restaurant. He participated in the 1991 « Meilleur Ouvrier de France » contest, won the prestigious title and the « Bocuse d’Or ». He has chaired the « Gold Medal Chefs » contest since 2009, and eventually in 2015, he joined « La Maison Lenôtre » as Director of Expertise.

Olivier Bellin —
This Breton set up shop in the far reaches of Brittany, in Plomodiern. With two Michelin stars and four « toques » Gault & Millau, the chef of L’Auberge des Glazicks is also part of the exclusive club of « Grandes tables du monde ». He expand upon the products of his native region, including lobster and scallops.

Jérôme Banctel —
Trained alongside the greatests – Alain Senderens and Bertrand Pacaud at L’Ambroisie, Jérôme Banctel was also inspired by his travels to Japan. Demanding about products, meticulous about cooking, he defends authentic flavor above all. In February 2016, the Michelin Guide awarded, two stars at once to the restaurant Le Gabriel.

Béatrice Fabignon —
Chef, this young 37-years-old woman cultivates cooking like friendship, with passion and sincerity. Self-taught, she evolved with the curiosity that characterizes her and that she finds in her chef partners. She designs ultra-marine recipes, inspired by all the regions and overseas territories.

Jonathan Blot —
On his first day of training in baking, Jonathan Blot fell in love with his job. His experiences at Jules Verne, Ladurée or with Jean-François Piège gave him a passion for macaroons, and he open his shop and then Acide, a dessert restaurant at Batignolles, Paris.
Voted best pastry chef of 2015 by the Pudlo Paris gourmet’s guide, 2016.

Sophie Fernandez —
She had sworn not to follow the same path as her parents… and yet, she fell into the « pot » of the family fish shop in Gaillac, in the Tarn. But her passion for excellence pushed her to try out for the Best Craftsman of France contest.
She won the precious title in 2005 and became one of the few women MOF in her class.

Jonathan Buirette —
This MOF fishmonger (2005), who opened his shop in the 17th arrondissement of Paris, nis also a professional who defends responsible fisheries in an effort to preserve marine resources. He is also involved with Sophie Fernandez in training youth in Hotel schools and sees his work as a defender of the heritage of the oceans.
Fishmonger of the Year in the 2016 Gourmand Paris guide.

Marcel Lesoille —
Quintuple oyster-opening world champion, Breton, and Basque at heart, he worked in catering but owes his career to meeting Paul Bocuse. He can open 2064 oysters per hour, 1200 in half an hour, and 131 in 5 minutes !

Julien Binz —
Best Apprentice in Britain at 18, Frédéric Simonin spent time in internationally renowned institutions such as : Ledoyen, Le Meurice, Taillevent. Elected « Young Chef of the Year » by the Gilles Pudlowski guide, he started work the same year with Joël Robuchon. He obtained his first star, then a second. In 2010 he opened his own restaurant in Paris.

Frédéric Simonin —
Best Apprentice in Britain at 18, Frédéric Simonin spent time in internationally renowned institutions such as : Ledoyen, Le Meurice, Taillevent. Elected « Young Chef of the Year » by the Gilles Pudlowski guide, he started work the same year with Joël Robuchon. He obtained his first star, then a second. In 2010 he opened his own restaurant in Paris.

Christophe Hay —
This chef from the Loir & Cher knows the United States well. He spent five years in Florida in Paul Bocuse’s group. Back in France, he opened La Maison d’à Côté in May 2014, just a few minutes from Chambord, and received its first star the following year.

Jean-Yves Kermarec —
Histoire de chocolat are shops where the pleasure of taste is combined with eye’s pleasure. Former restaurateur, Jean-Yves decided in 2002 to specialize in cocoa. Since that moment, he creates original recipes inspired from his native Brittany : salted butter, wheat, honey from Ouessant Island… creations to discover !
Chocolatier of the Year 2005 in France Guide Gilles Pudlowski

Julien Marseault —
Another pure Breton chef installed in a small village, who shares his passion for cooking and offers a fun experience for his customers. His career started at Guy Savoy’s, in the kitchens of the Beau-Rivage in Lausanne and in Corsica at the Grand Hotel of Casa where he earned his first star. In his Château de Sable at Porspoder, he was elected « heart stroke » by Gault & Millau in 2014.
He received another Michelin star in 2016.

Yann Couvreur —
Nothing will stop Yann Couvreur, who just opened his shop near République in Paris.
Former pastry chef at Prince de Galles Hotel, this cake designer revisits the millefeuille and Pavlova in a unique way and dreams of opening a shop in New York !

It is on TV, on the Topchef program, that this young French of Korean origin was discovered and his talent revealed. Since then, he maintained his celebrity with his two restaurants near the Bastille, he sees the cuisine as « a window on the world ».
Sang Boyer, an inspired and committed chef, strives to simply develop culinary ex-periences with a touch of travel inspirations.Pierre Sang, 35 years old is a French chef, originally from Korea, who, when he was a teenager, was involved in the life of its small village in Auvergne. Auvergne is a region in the heart of France, which holds various gastronomic specialties such as terroir pro-ducts, cheeses or exceptional meats. His best memo-ries come from the time he spent with the storekeepers of this rural town. He went picking in the countryside, he kneaded, he dresses meats, he barded or chiseled with those artists. His tastes started to take shape step by step as well as his palate. Captivated by these exciting adventures and ins-pired by the sharing values that his parents have taught him, he started his career working with the greatest chefs in France and Great Britain. 2011, he was a finalist of the TV show Top Chef, talent revealer. His aura and instinct, combined with its undeniable passion made him a young respected chef, imprint of li-berty. He opened his first restaurant “Pierre Sang in Oberkampf” in 2012 and his second one “Pierre Sang on Gambey” in 2014.Crédit photo: Stéphane de Bourgies

Romain Pouzadoux —
This Breton from Brest, develops in his restaurant L’Imaginaire a cuisine that is inspired by the variety of nature and market opportunities. Younger, he was trained by Patrick Jeffroy, among others, at Carantec. He worked several years in the USA.

Joël Philipps —
It is in Strasbourg that you will discover the restaurant Esprit du terroir of Joël Philipps and his creative cuisine, subtle and renewed regularly according to the freshly selected produce. He was trained in the beautiful houses of the region including L’Auberge de l’Ill. He revisits the best Alsatian recipes to please his customers. After six months, he won his first Michelin star.

Jean-François Rouquette —
A Michelin star and four « toques » Gault & Millau, Jean-François Rouquette has been flourishing since 2005 in the heart of the kitchens of the Park-Hyatt Paris-Vendôme. This chef, lover of nature, finds his inspiration in flowers and in his travels. To quote him : « the enemy of taste is boredom » and this encourages him to boil.

Julia Sedefdjian —
The youngest starred chef of France, at only 21 years old, has talented fingers.
The girl, who started with Fables de la Fontaine at 18, climbed the steps one by one. David Bottreau, the boss, trusted her to replace the former chef. She shines with her most emblematic creations : her interpretations of aioli and lemon pie.
Julia is a talent to follow.

Christophe Felder —
He grew up in Alsace with a baker for a father who gave him his passion for the job. He became a pastry chef, then he spent 15 years at the Crillon Hotel before opening his stores in Paris and Strasbourg. He travels frenquently to Japan in order to promote his craft as an art. He is the author of over 30 books dedicated to pastry.

Alan Geaam —
Born in Liberia, this chef is from a traveling family, half American. He arrived in Paris in 1999 after visiting many places around the world. He delivers gourmet and generous cuisine : « My cooking is precise. I respect the right cooking while having fun in plating because the eye eats before the nose and the nose before the mouth » says the chef of AG Les Halles, Saint Germain des prés, and Nicolas Flamel’s Inn.

Jaïs Mimoun —
This young chef, 28 years of age, Jaïs Mimoun, used his name for the restaurant that he opened with his brother, just steps from the Quai d’Orsay in Paris. After training at the Médéric School, he worked with Eric Fréchon at the Bristol Hotel, then became the chef at Le Petit Tonneau. He then started his own restaurant, Le Petit Célestin, again with his brother.

Sébastien Serveau —
His career bears the marks of prestigious properties such as The Ritz, Hôtel Costes and the Maison Dalloyau.
Co-founder of the pastry shop « Nougat Tea’n », he shares his experience of the Valrhona school and he is an international consultant.