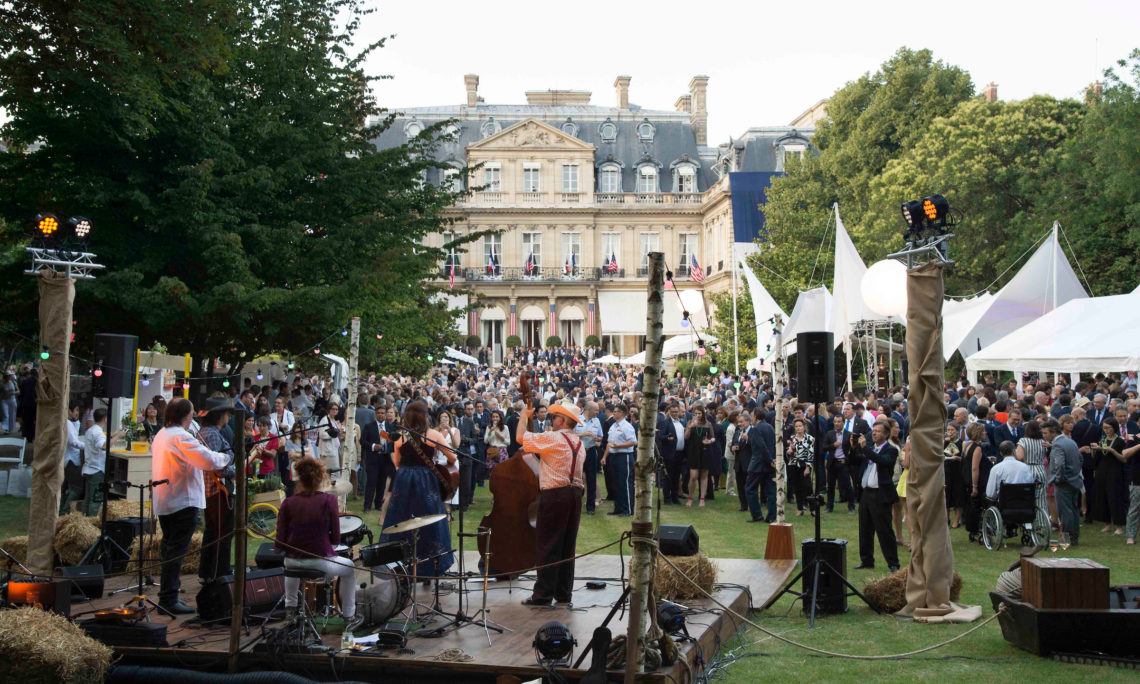 On June 28, 2018, the U.S. Ambassador to the French Republic and Principality of Monaco, Jamie McCourt, hosted her first Independence Day Reception in celebration of the 242nd anniversary of the signing of the Declaration of Independence.

The celebration brought together several hundred guests to the Hotel de Pontalba, which previously served as the 18th century home of New Orleans born Micaela Almonester, Baroness de Pontalba (1795-1874), and now functions as the Ambassador’s official residence in Paris.
To mark the occasion of the 300th anniversary of the founding of the city, this year’s celebration was New Orleans themed – a city that enjoys extensive historical ties with France dating back to the 17th century.

To illustrate this enduring friendship, the Mayor of Orléans, Olivier Carré, who recently signed a “sister cities” agreement with New Orleans, served as the official guest of honor for the reception.

The evening permitted guests to experience the richness of Louisiana culture through an exploration of the region’s history, art, music, and gastronomy.

The Embassy was proud to collaborate with the French Foreign Ministry to allow guests the opportunity to view the documents of the Louisiana Purchase Treaty, signed by President Thomas Jefferson himself, through an exceptional loan from the foreign ministry’s diplomatic archives.

Of course, it would not have been a true NOLA party without good music. Emilie Vidrine and Tee Franglais band introduced guests to the Cajun-Zydeco tradition, while the United States Air Force Europe Band “The Wings of Dixie” played its traditional blues repertoire. Finally, the Jeff Boudreaux All Star Jazz Band performed multiple sets of jazz, which brought the Cajun spirit into the heart of Paris late into the night.