Home Page d'accueil | News & Events | Joint Statement by the FM of China, France, Russia, the United Kingdom, and the United States on the 50th Anniversary of the NPT 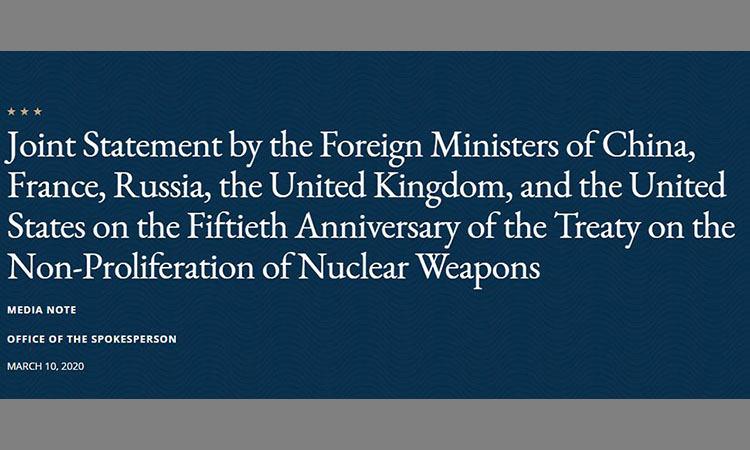 Joint Statement by the Foreign Ministers of China, France, Russia, the United Kingdom, and the United States

Office of the Spokesperson

The text of the following statement was released by the Governments of the United States of America, China, France, Russia and the United Kingdom on the occasion of the fiftieth anniversary of the NPT.

On March 5, 1970, the Treaty on the Non-Proliferation of Nuclear Weapons (NPT) entered into force. Today, 50 years later, we celebrate the immeasurable contributions this landmark treaty has made to the security and prosperity of the nations and peoples of the world. We reaffirm our commitment to the NPT in all its aspects.

The NPT has provided the essential foundation for international efforts to stem the looming threat – then and now – that nuclear weapons would proliferate across the globe. In so doing, it has served the interests of all its Parties.

We also celebrate the astonishingly diverse benefits of the peaceful uses of the atom, whether for electricity, medicine, agriculture, or industry. We reiterate our strong support for broadening access to the benefits of nuclear energy and its applications for peaceful purpose. This boon to humanity thrives because the NPT, and the nuclear nonproliferation regime built around the Treaty, has helped provide confidence that nuclear programs are and will remain entirely peaceful.

The International Atomic Energy Agency (IAEA) plays a critical role in NPT implementation, both to promote the fullest possible cooperation on the peaceful uses of nuclear energy, and to apply safeguards and verify that nuclear programs are entirely peaceful. An IAEA comprehensive safeguards agreement together with an Additional Protocol provide credible assurances of the absence of undeclared nuclear activities and should become the universal standard for verifying the fulfillment of NPT obligations. We pledge our full and continued support to the IAEA and urge others to do the same.

We remain committed under the NPT to the pursuit of good faith negotiations on effective measures related to nuclear disarmament, and on a treaty on general and complete disarmament under strict and effective international control. We support the ultimate goal of a world without nuclear weapons with undiminished security for all. By helping to ease international tensions and create conditions of stability, security and trust among nations, the NPT has made a vital contribution to nuclear disarmament. The NPT continues to help create conditions that would be essential for further progress on nuclear disarmament.

The success of the NPT was not foreordained, nor is its future success guaranteed. It depends on our concerted and sustained efforts to ensure compliance, to promote universalization, to ensure effective safeguards, and to respond to ongoing and emerging proliferation challenges, wherever they occur. Even at the height of the Cold War, our predecessors made this wise investment in our shared security and prosperity. Today, we pledge our unstinting commitment to preserving and deepening this legacy for future generations.