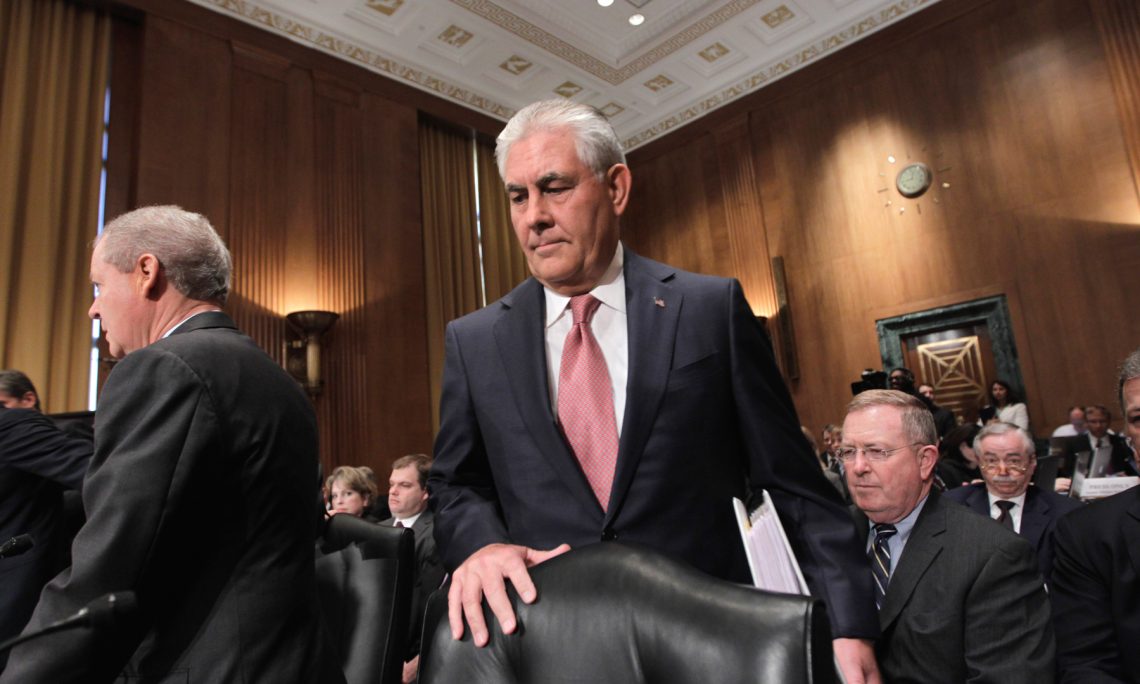 Rex Tillerson, a globe-trotting oil executive and engineer, is the new U.S. secretary of state and chief foreign affairs adviser to President Trump.

He was confirmed February 1 as the 69th secretary of state, a position first held by Thomas Jefferson and most recently by John Kerry. Five predecessors won the Nobel Peace Prize.

Rex Wayne Tillerson was born in Wichita Falls, Texas, in March 1952, the second of Bobby Joe and Patty Sue Tillerson’s three children. His father was a bread salesman who took a pay cut to work for the Boy Scouts of America.

Scouting was in the family’s blood. Its code of honor has remained a touchstone for Tillerson, who made Eagle Scout at 13 and became president of the organization.

The family moved from Wichita Falls to Stillwater, Oklahoma, and Huntsville, Texas. Their circumstances were modest, Tillerson said in a talk at Texas Tech University in 2015.

He “always had a job,” mowing lawns, working as a busboy and — by the time he was 16 — working as a janitor in the engineering building at Oklahoma State University. “I had no idea what an engineer was,” Tillerson said, but he learned and set his sights on becoming one.

Tillerson, a drummer, got a scholarship to the University of Texas at Austin reserved for engineers in the marching band. He struggled early on and questioned whether he belonged in college. But a professor helped him pull through, and he finished with strong grades.

Tillerson, a drummer, got a scholarship to the University of Texas at Austin reserved for engineers in the marching band. He struggled early on and questioned whether he belonged in college. But a professor helped him pull through, and he finished with strong grades.

Exxon sent the newly minted civil engineer to Katy, Texas. “I had to do everything. I knew nothing about the oil industry,” he said. Tillerson rose quickly, becoming a manager at 28 and eventually running operations in the heart of Texas oil country and surrounding states.

In 1995 Exxon dispatched him to Yemen, a country emerging from a civil war. He spent two years in Sana’a.

His next stop was in Russia to work out complicated deals to drill off Sakhalin Island and in the Caspian Sea. Russia went through six prime ministers in the 14 months that Tillerson was there, the sixth being Vladimir Putin.

What served him well in both Yemen and Russia, Tillerson said, was “being very transparent,” leaving no doubt about where he and Exxon stood.

After his Russian stint, the newly merged ExxonMobil in 1999 put him in charge of 120 projects. “I lived on an airplane, spent all of my time traveling around the world … developing relationships with governments,” Tillerson said. “I never aspired to be the chairman and CEO,” he said. But the company made him senior vice president and groomed him for the top job, which he got in 2006.

Tillerson and wife Renda have four sons and five grandchildren. Home is a horse farm in Bartonville, Texas, where they breed and train horses. Rodeos and football games are favorite pastimes.