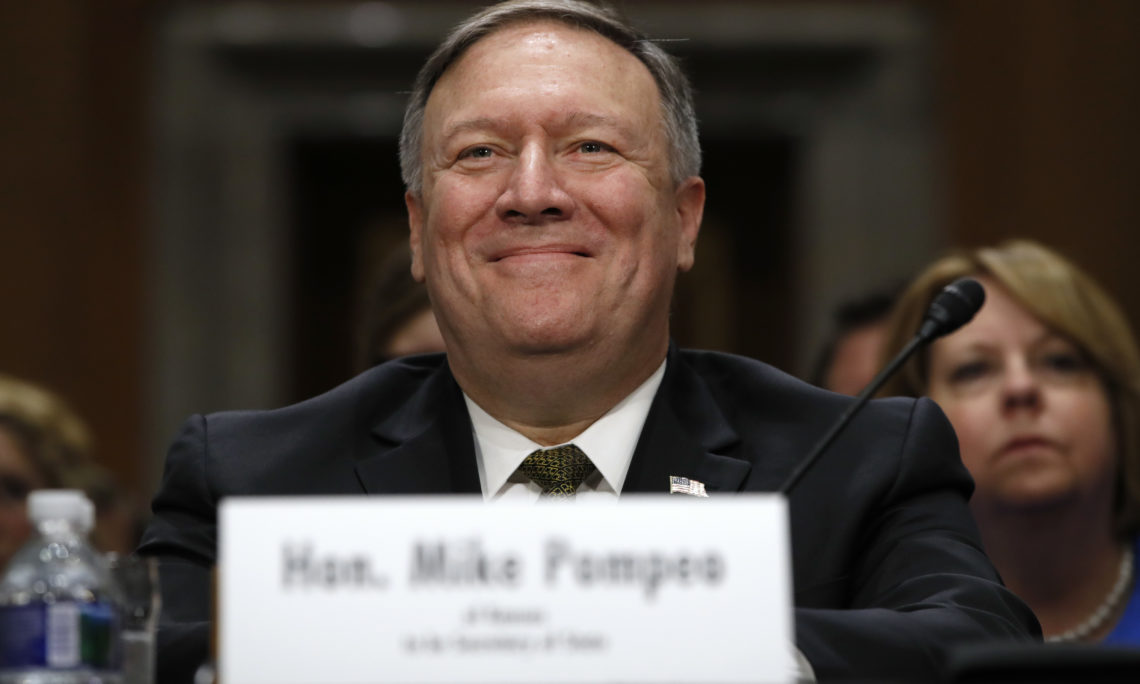 Secretary of State-designate Mike Pompeo smiles after his introduction before the Senate Foreign Relations Committee during a confirmation Thursday, April 12, 2018 on Capitol Hill in Washington. (AP Photo/Jacquelyn Martin)

I am pleased with the Senate’s confirmation of Mike Pompeo to serve as our country’s top diplomat. Having a patriot of Mike’s immense talent, energy, and intellect leading the Department of State will be an incredible asset for our country at this critical time in history. He will always put the interests of America first. He has my trust. He has my support. Today, he has my congratulations on becoming America’s 70th Secretary of State.

Mike Pompeo was sworn in as Secretary of State on April 26, 2018. He previously served as Director of the Central Intelligence Agency from January 2017 to April 2018.

Prior to joining the Trump Administration, Mr. Pompeo was serving in his fourth term as congressman from Kansas’ 4th District. He served on the House Intelligence Committee, as well as the Energy and Commerce Committee and House Select Benghazi Committee.

Prior to his service in Congress, Mr. Pompeo founded Thayer Aerospace, where he served as CEO for more than a decade. He later became President of Sentry International, an oilfield equipment manufacturing, distribution, and service company.

Mr. Pompeo graduated first in his class at the United States Military Academy at West Point in 1986 and served as a cavalry officer patrolling the Iron Curtain before the fall of the Berlin Wall. He also served with the 2nd Squadron, 7th Cavalry in the US Army’s Fourth Infantry Division.

After leaving active duty, Mr. Pompeo graduated from Harvard Law School, having been an editor of the Harvard Law Review.

Mr. Pompeo was born on December 30, 1963, in Orange, California. He is married to Susan Pompeo and has one son, Nick.