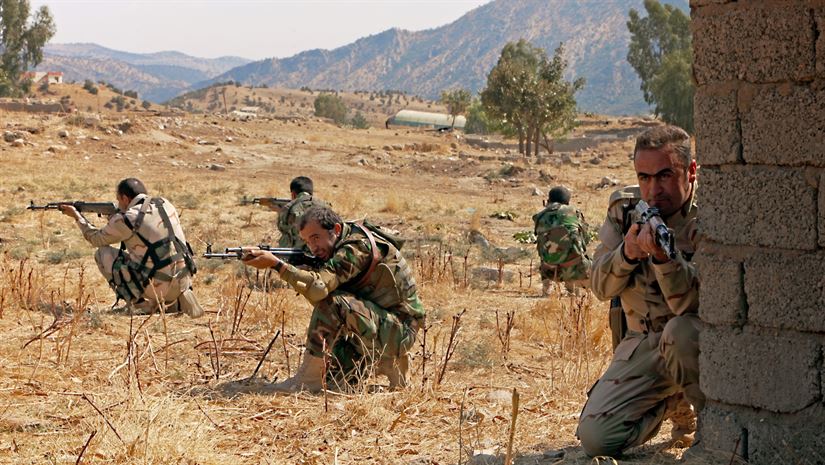 WASHINGTON, April 14, 2016 — The campaign against the Islamic State of Iraq and the Levant has accelerated, President Barack Obama said yesterday at the headquarters of the Central Intelligence Agency.

Obama spoke to the press after a meeting of the National Security Council at the intelligence facility to review progress being made against all stripes of terrorist.

In February, the president ordered the national security team to accelerate the campaign against ISIL. “And we have,” he said. “This remains a difficult fight, and a complex one, involving many countries and different communities in Syria and in Iraq. It is a military campaign and a counter terrorism effort, but it also depends on a whole range of political issues that face these two countries.”

Since February, ISIL has struck in Turkey and Belgium. The terror group continues to launch attacks against innocent civilians in Iraq and Syria. “With attacks like these, ISIL hopes to weaken our collective resolve,” the president said. “Once again, they have failed. Their barbarism only stiffens our unity and determination to wipe this vile terrorist organization off the face of the Earth.”

ISIL is on the defensive in Iraq and Syria, Obama said.

“We have momentum, and we intend to keep that momentum,” he said.

The president said the counter-ISIL air campaign continues to hit the terror group throughout the region. “We continue to take out their leaders, their commanders and those plotting terrorist attacks,” he said. “For ISIL’s leadership, it has been a bad few months.”

With coalition support, local forces continue to push ISIL back in Iraq, the president said. He noted the success Iraqi forces have had in Anbar province, especially their successes in Hit.

“In Syria, a coalition of local forces — some backed by U.S. special operations forces — continue to make progress, pushing ISIL out of the strategic town of al-Shaddadi,” he said. This cut the supply and communications line between Raqqa, Syria — ISIL’s self-proclaimed capital — and Mosul, Iraq.

“In other words, the ISIL core in Syria and Iraq continues to shrink,” Obama said. “Their ranks of fighters are estimated to be at the lowest levels in about two years, and more and more of them are realizing that their cause is lost. Our cyber operations are disrupting their command-and-control and communications. We continue to target ISIL’s financial infrastructure, including its oil wells, refineries and supply lines.”

Diplomats are working to end the Syrian civil war, the president said.

“Talks are now resuming in Geneva,” he said. “And the United States will continue to do everything that we can to help the cessation [of hostilities] succeed and to advance a political solution to the Syrian civil war.”

But ISIL has global ambitions, and the United States will continue to go after the terrorists wherever they are, Obama said.

“We’re helping partners strengthen their security forces, from Africa to Afghanistan,” he said. “As we, our allies and partners have made it harder for foreign terrorists to reach Syria and Iraq, we’ve seen an uptick in the number of ISIL fighters heading to Libya. So we’re going to continue to use the full range of tools to roll ISIL back from Libya while assisting the new and nascent Libyan government as it works to secure their country.”

The president also pointed out that ISIL is not the only terror threat the United States is addressing. Strikes continue to hit al-Qaida and its affiliates, he said.