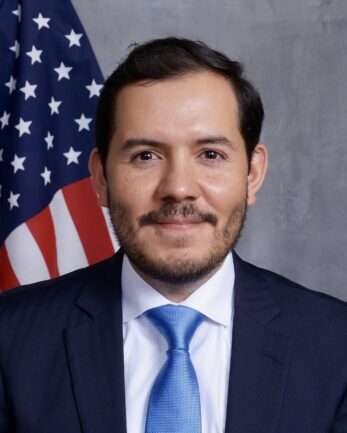 Hector Brown assumed his duties as U.S. Consul for Southwest France in August 2022.  Based at the U.S. Consulate in Bordeaux, he has an area of responsibility covering the former Midi-Pyrénées region and France’s largest administrative region, the Nouvelle-Aquitaine.

Most recently, Mr. Brown served as the Political and Economic Section Chief at the Embassy of the United States to the Central African Republic after serving as a Peacekeeping Advisor in the State Department’s Bureau of International Organization Affairs.  Before that, he served as an Advisor for Economic and Social Affairs at the U.S. Mission to the United Nations in New York where he served on the executive boards of UN Women, UNICEF, UNDP, and UNFPA, providing strategic direction and oversight for over $10 billion in humanitarian and development assistance.

His previous assignments include serving in the Secretary of State’s Secretariat (“the Line”) serving two Secretaries of State, as the Labor, Education, and Gender Advisor at the U.S. Mission to the Organization for Economic Cooperation and Development in Paris, and as vice consul in Ciudad Juarez, Mexico.

Mr. Brown earned a master’s degree from The Fletcher School of Law and Diplomacy and a bachelor’s degree from Loyola University Chicago.  He speaks and reads French and Spanish, and his next language will be that pertaining to oenology.  A native of Texas, Mr. Brown enjoys swimming and playing tennis, cooking with friends, frequenting the cinema and performances of musical theatre, and above all, shamelessly competing to be the favorite uncle.