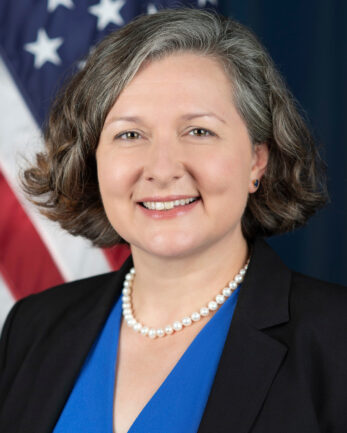 Elizabeth Webster assumed her duties as U.S. Consul for Western France in August 2021. Based at the U.S. Consulate in Rennes, she has an area of responsibility covering the regions of Brittany, Normandy, and the Pays de la Loire.

Ms. Webster most recently served as the Deputy Spokesperson and the Director of the Press Operations unit for the Bureau of European and Eurasian Affairs. Prior to this, she worked for a year as a Pearson Congressional Fellow in the office of Senator Jeff Merkley, supporting his work on the Senate Foreign Relations and Appropriations Committees. She also served as a Special Assistant to the Under Secretary of State for Public Diplomacy and Public Affairs.

Overseas, Ms. Webster has served as the Spokesperson and Press Officer at the U.S. Embassy in Budapest, Hungary, in addition to prior diplomatic assignments in Astana (now Nursultan), Kazakhstan; Ashgabat, Turkmenistan; and Abu Dhabi, United Arab Emirates. In Washington, she worked as the NATO-Russia Policy Officer in the Bureau of European and Eurasian Affairs, and she served in the Bureau of Consular Affairs’ Legal Advisory office.

A native of Blairstown, New Jersey, Ms. Webster received her undergraduate degree in history and English literature from Dartmouth College, in Hanover, New Hampshire. She received her Juris Doctor from the Marshall-Wythe Law School of the College of William and Mary, in Williamsburg, Virginia. Ms. Webster has studied French, Spanish, Hungarian, and Russian.

Ms. Webster is married to fellow U.S. diplomat Mark Webster, who serves at the U.S. Embassy in Paris, and they have two children. In her free time, she enjoys reading, helping friends with genealogy research, and travelling with her family.