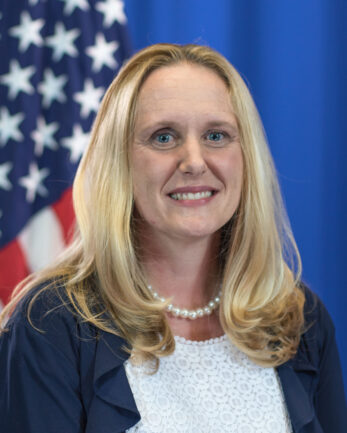 Kristen Grauer is the Consul General at the U.S. Consulate in Marseille, France, returning to France after having served as an Economic Officer at the U.S. Embassy in Paris from 2010-2013.

Kristen most recently served at the U.S. Department of State as the Deputy Director in the Economic Bureau’s Office of Economic Policy and Public Diplomacy. In that role, she oversaw the bureau’s foreign assistance and public outreach and supervised the desk for the U.S. Mission to the Organization for Economic Cooperation and Development (OECD). Earlier in her career, Kristen served as the Political and Economic Counselor at the U.S. Embassy in Abidjan, Côte d’Ivoire. She has also completed tours as an embassy economic officer in Baghdad, Iraq, and Moscow, Russia, and as a political officer in Monrovia, Liberia and Cotonou, Benin.

Kristen completed a mid-career Master of Science in National Resource Strategy at the U.S. National Defense University’s Eisenhower School and is a graduate of the Foreign Service Institute’s long-term economic course. She graduated from the University of Michigan with a bachelor’s degree in economics and political science and a master’s in public policy. She also earned a Diploma for Graduates in development from the University of London – International Programmes.

Ms. Grauer speaks French and some Russian and Spanish. She is married with two sons.