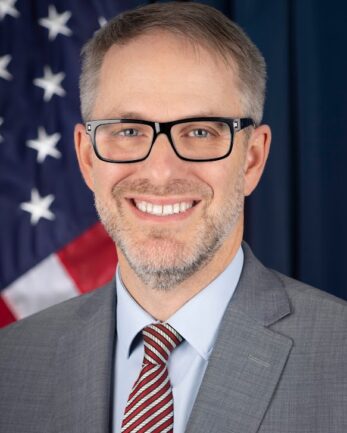 A native of California, David joined the Foreign Service in March 1998 and has served on five continents. He is a career member of the Senior Foreign Service with rank of Minister Counselor. David began his assignment as Deputy Chief of Mission at the U.S. Embassy in Paris in August 2022. Before that, he served as Minister Counselor for Consular and Consulate Affairs in Mexico, overseeing 750 staff and the Department’s largest overseas consular operation. Between 2015 and 2018, David served as principal officer and U.S. Consul General in Amsterdam, where he oversaw consulate operations in the Dutch capital with a focus on commercial and cultural outreach.

Between 2013 and 2015, he served as the Consular Coordinator for Vietnam based in Ho Chi Minh City, where he directed countrywide operations and managed the Mission’s response to an historic increase in the demand for U.S. visas and other consular services. Between 2010 and 2012, David served as the Senior Country Officer for France in the Department of State’s Bureau of Western European Affairs, where he helped formulate U.S. policy and advance transatlantic cooperation with France and other European partners. He has also served at the (then) U.S. Interests Section in Havana, Cuba, where he oversaw implementation of major aspects of the 1994 Migration Accords between the two countries. In addition, David has served in Tijuana, Mexico; Namibia; Belgium; and Colombia. David has been the recipient of numerous Department of State Meritorious and Superior Honor Awards.

He is a graduate of the University of California at Berkeley and the London School of Economics. He met his wife, Sandra Cabrera, during his first tour in Bogota and together they have three beautiful daughters.