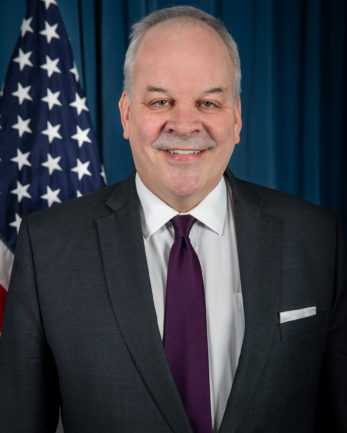 Brian Aggeler is the Deputy Chief of Mission at the U.S. Embassy in Paris, France.  Previously, he was the Minister-Counselor for Political Affairs in Paris from 2017 to 2019.  Prior to his arrival in Paris, he was Director of the Office of Assistance Coordination in the U.S. Department of State’s Bureau of Near Eastern Affairs, leading an office of 70 in Washington and two regional hub offices in coordinating all U.S. government assistance to the Middle East to reflect policy priorities.

A career member of the U.S. Senior Foreign Service with the rank of Minister Counselor, he previously served as Coordinator for Economic and Development Assistance at the U.S. Embassy in Islamabad, overseeing the planning and implementation of over $700 million in annual civilian assistance programs managed by several U.S. agencies.  He has also served as the Deputy Chief of Mission at the U.S. Embassy in Skopje, Macedonia.  Other previous assignments have included Political Counselor in Hanoi, Vietnam, Chargé d’affaires at the U.S. Mission to the United Nations Educational, Scientific, and Cultural Organization (UNESCO) in Paris, and other tours in Delhi, Chennai, Budapest, Ouagadougou and Washington.  Before joining the Foreign Service, he was a Peace Corps Volunteer in the Central African Republic.  He is married to Senior Foreign Service Officer Angela Aggeler.  Their daughter Madeleine is a writer in New York City.