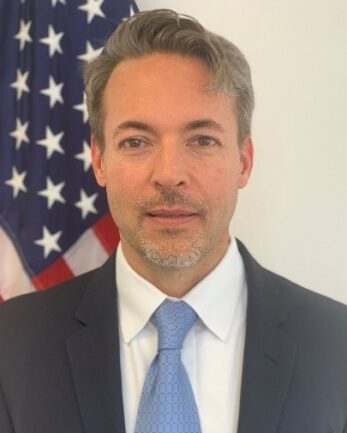 Richard Johns commenced his duties as U.S. Consul in Lyon in August 2022.  His most recent assignment was at the U.S. Embassy in Kabul, where he managed personnel operations and worked on the evacuation and resettlement of the local Afghan staff to
the United States.  Prior to that, Richard completed multiple tours at U.S. Mission Geneva in the management and economic sections.  He was responsible for representing U.S. interests related to Internet governance, telecommunication policy, and cybersecurity at the United Nations in Geneva.  And, as the head of logistics and conference services, he managed many aspects of the operations, including the coordination of numerous VIP delegations and official visits to the U.N. and other International Organizations.  Richard has also worked in Colombia, Argentina, and Japan.

Prior to joining the State Department, Richard worked on import and customs issues at the U.S. Department of Commerce and on export promotion at the U.S. Foreign Commercial Service.  Originally from Phoenix, Arizona, he lived in Utah until graduating from university.  He then completed an MBA in International Business and an MA in International Trade Policy from George Washington University, as well as a Master’s Certificate in European Business Affairs from the University of Rouen in France.

He speaks Spanish and French, is married, and has three children who enjoy learning other languages and living abroad.  In his spare time, he enjoys skiing, paddleboarding, and watching soccer matches.