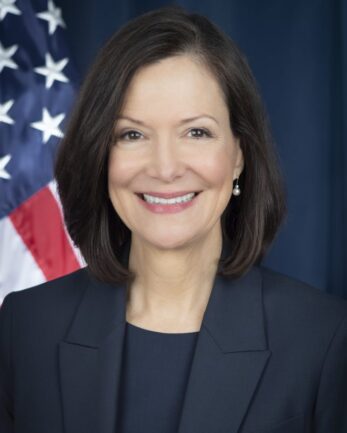 U.S. Ambassador to the French Republic and to the Principality of Monaco

Ambassador Denise Campbell Bauer, of California, was sworn in as U.S. Ambassador to the French Republic and the Principality of Monaco on December 23, 2021.

Denise Campbell Bauer is an experienced diplomat, non-profit leader, and advocate for women’s voices in politics and policy. She served as the United States Ambassador to the Kingdom of Belgium from August 2013 until January 2017, where she led one of the largest embassies in Europe and earned a reputation for her collaborative leadership style, high ethics standards, and crisis management skills.  In that role, she focused on building transatlantic security partnerships and expanding international trade.

Bauer began her career in Los Angeles, where she worked as a journalist for two internationally respected television networks. She went on to serve in leadership roles for a number of non-profits.

In 2019, Bauer became the Executive Director of Women for Biden, a nationwide network of women that organized and mobilized to elect President Biden. In 2012, she served in a similar role for the Obama-Biden presidential campaign, while also chairing the Women’s Leadership Forum for the Democratic National Committee. Upon returning from Brussels in 2017, she re-engaged in politics, focusing on supporting women running for office for the first time.

Bauer received a B.A. in Political Science from Occidental College. She speaks French.