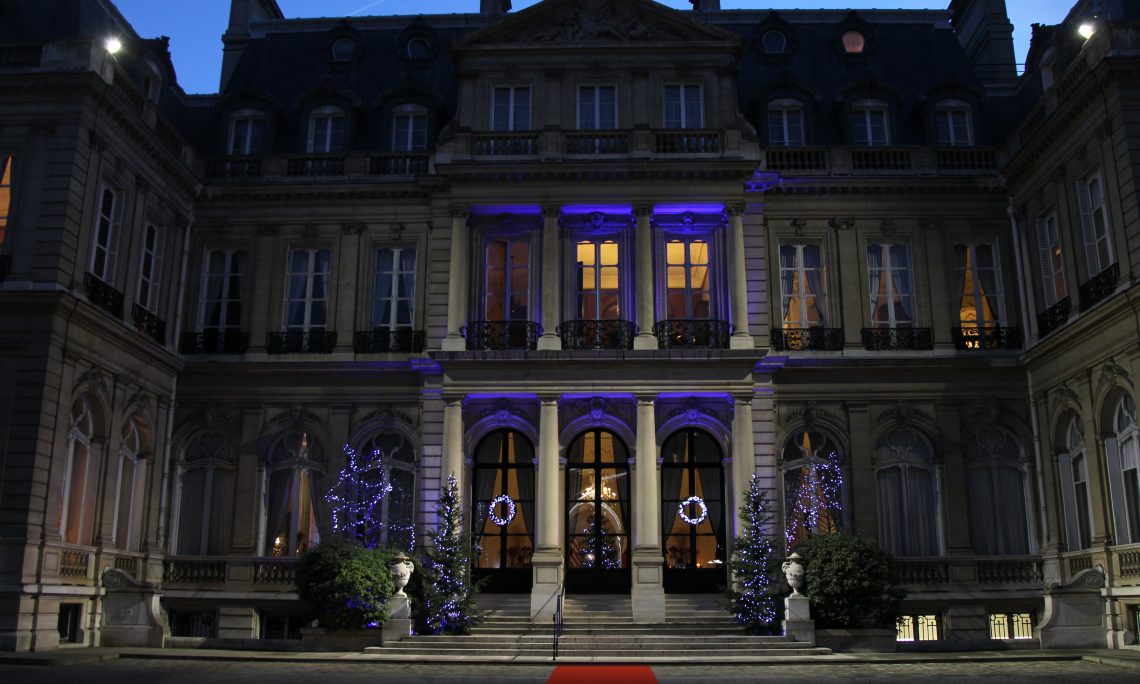 Even into the early years of the reign of Louis XIV, the western limits of the ancient city of Paris stretched only to the Place de la Concorde and the rue Royale. Beyond lay a bucolic suburb of open fields and modest houses called the Faubourg Saint-Honoré. It was here that in 1710 the King’s Chancellor, Henri d’Aguesseau, acquired a tract of land which included the present site of the American Ambassador’s Residence at 41, rue du Faubourg Saint-Honoré.

In 1720, d’Aguesseau built a handsome house on the property with a flower and vegetable parterre that occupied almost the same space as the Residence gardens today. Soon other great houses sprang up in this now – fashionable neighborhood, each with equally grand orchards that reached down to the Champs-Elysées. To the east, these are today the Japanese Embassy, the Cercle de l’Union Interalliée, and the Visconti-designed British Embassy; and to the west, the Elysée Palace, Residence of the French President. Their extensive gardens, well-preserved and improved by subsequent owners, create a verdant oasis in the center of Paris.

After d’Aguesseau’s death in 1751, the property passed to a succession of prominent owners before it was acquired in 1778 by Charles Talleyrand de Périgord de Chalais, a cousin of the famous statesman. He later sold the house to the Comte Louis Le Pelletier de Mortefontaine under whom it became one of the great royalist bastions of Paris. Then in 1836, the property passed to a woman from New Orleans, the Baroness de Pontalba. She pulled down the existing structure and between 1836 and 1842, built the residence which now stands in its place. After her death, the house and all the furnitures were sold to Baron Edmond de Rothschild, scion of the great banking family, who saw the home through its next period of splendor. Upon his father’s death in 1934, Baron Maurice de Rothschild inherited the hôtel. But before he realized his own plans of improvements, war broke out and forced the Rothschild family to flee to Switzerland, leaving the Residence in the hands of Nazi occupiers.

The building served as a club for Goering’s officers. The Nazis made only modest changes. While the Rothschilds recovered most of the major items stolen during the war, in large part thanks to the assistance of James Mortimer and the curators attached to the Seventh Army, neither Baron Maurice or any of his heirs were ever again to live in the mansion at 41, rue du Faubourg Saint-Honoré. After the war, the building was leased to the British Royal Air Force Club, and then to the United States Government. In 1948 the Americans purchased the building.

In 1966, the decision was taken to move the Ambassador’s Residence from avenue d’Iena to 41, rue du Faubourg Saint-Honoré. Renovation work was finally completed in 1971, and in January 1972 then Ambassador and Mrs. Arthur K. Watson moved into the new Residence. Since that time, continual efforts have been made by each Ambassador to further restore the Residence, making it a living link of friendship between France and the United States.