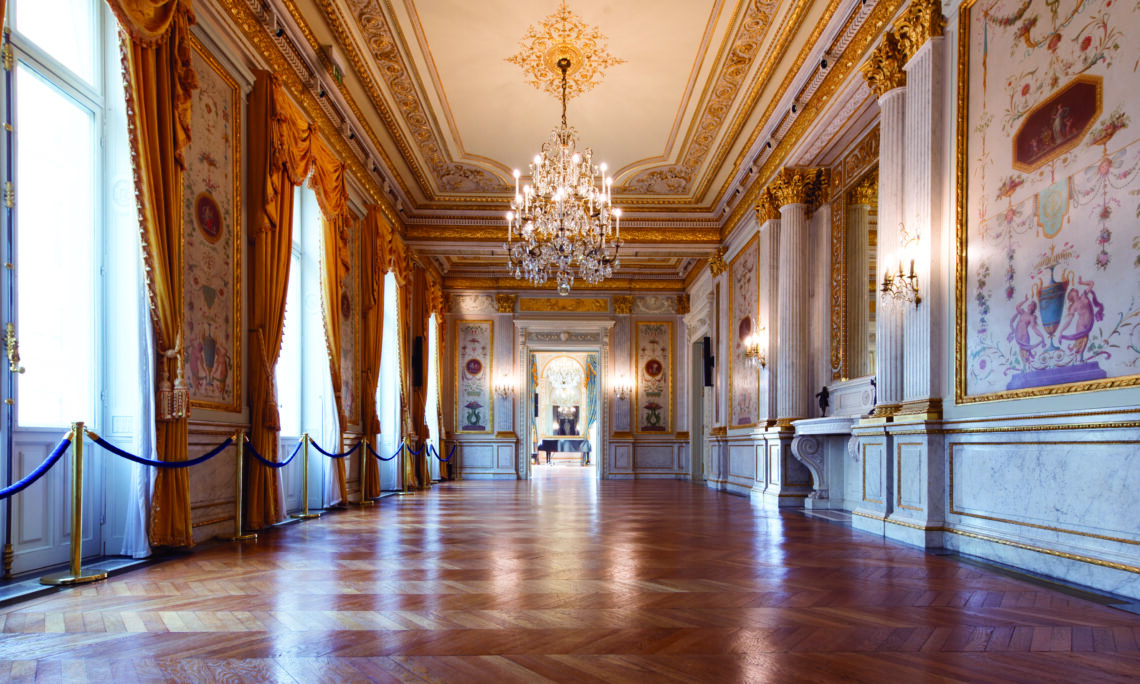 This room, like the adjoining Rothschild Dining Room, is part of the extension built for the Rothschild family by architect Léon Ohnet between 1868 and 1871. The décor, in the Louis XVI revival style of the Second Empire, was created by Léon Ohnet and Emile Petit.

The main component of the décor is the “blanc veiné” marble, used for the pilasters, pillars, base boards and console, beautifully contrasted by the bronze elements used for the pilaster and pillar bases, beadings and Corinthian capitals. Above the base boards, one can find large “maroufle” panels and narrow arabesque painted panels. Historical research suggests that two of the panels date from of the end of the 18th century; additional panels were copied to match in the 19th century.

The original sculpture was bought by Baron Alphonse-James de Rothschild and placed in this room in 1904. When the United States Government bought this building in 1950, the statue had already been moved to the Château de Ferrière, another Rothschild mansion. Baron Guy de Rothschild donated it to the Louvre Museum in 1974. This replica was made by Michel Bourbon in 2003.

The two bronze bas-reliefs at the two ends of the room are by Eugène Cornu. The ceiling medallions, cornices and friezes were executed by Ambroise Choiselat, Michel-Victor Cruchet and Claude-Phillippe-Albert Cruchet. The two statuettes placed on the console represent Louis XV dressed as a musician and Madame de Pompadour. The curtains were woven on a loom according to traditional methods by Tassinari & Chatel in a workshop in Lyon.

From 1948 until 1950, this room housed large meetings between representatives of the European Recovery Program (Marshall Plan), administered by the Economic Cooperation Administration (ECA), and of the 17 nations of the Organization for European Co-Operation (OEEC). The table and chairs, as well as other office furniture, were loaned at the time to the U.S. Government by the French “Mobilier National.”