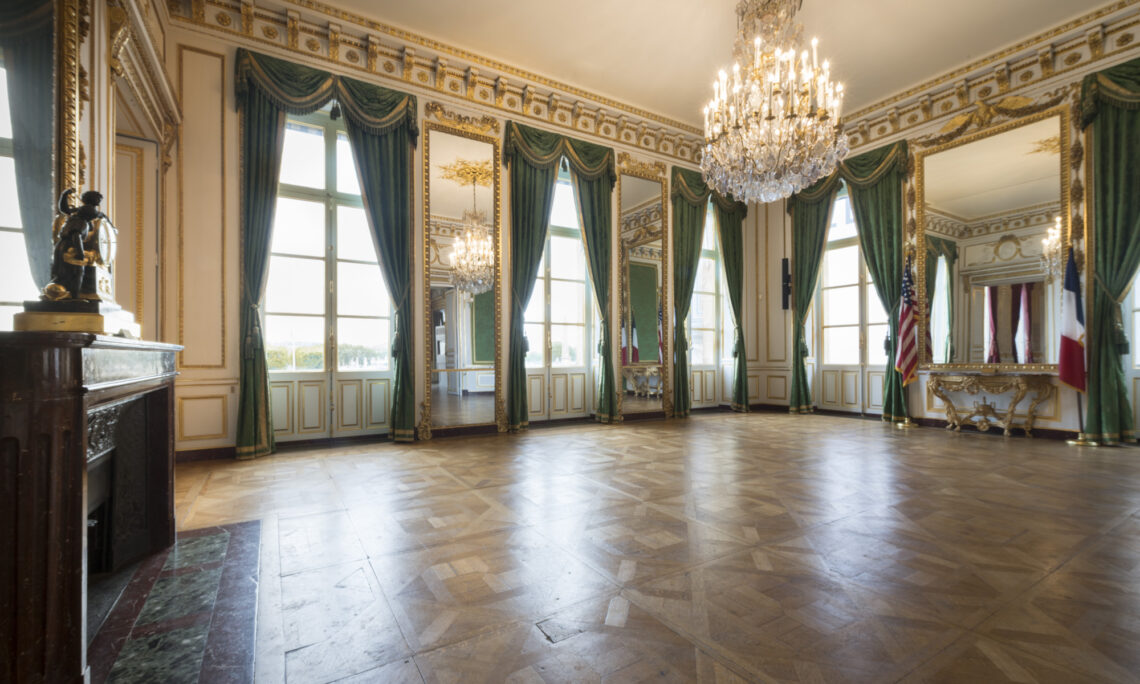 During Saint-Florentin’s time, this room was used for large public meetings, in contrast with the more intimate meetings which were held in the State Office, thus imposing a solemn but stately décor.

This room was also a central stage for Talleyrand’s many political advances and was the room that was used most often to receive guests of a certain rank. One of Talleyrand’s most famous political maneuvers was his involvement in the restoration of the Bourbons on the throne of France and the conditions of peace in Europe following Napoleon’s defeat, cemented first by the Treaty of Fontainebleau and then by the Treaty of Paris. These treaties ultimately paved the way for the Congress of Vienna. These political achievements, in which Talleyrand played a central role, were based largely on one-on-one negotiations held in this room.

This is also where Ambassador W. Averell Harriman’s office was between 1948 and 1950. His desk as well as other furniture needed for the offices of the European Recovery Program (Marshall Plan) in this building were loaned at the time by the French “Mobilier National.”

The original wood carvings of the two pier glasses are the work of artist François-Joseph Duret. The beautiful gilded eagle ornaments are a reference to Saint-Florentin’s coat of arms. Eagles being a traditional American symbol, one could say it was destiny that the Government of the United States should one day be in charge of the care of these décors. The ornaments of the cornice and of th

In the 18th century, on both sides of the center door, were two Gobelins tapestries that were given to Saint-Florentin by King Louis XV. They represented “The Abduction of Proserpine,” based on a drawing by Joseph-Marie Vien, and “The Abduction of Europe,” based on a drawing by Jean-Baptiste Pierre. Tapestries made from the same drawings were commissioned by Madame du Barry for her Pavillion at Louveciennes. The tapestries that hung in this salon were sold in 1838 and are now in a private collection outside of France.

In place of the missing tapestries, a luminous green fabric was installed during the last restoration campaign. It was woven by Manufacture Prelle in Lyon. The passementerie tassels, braids and fringes were created by Declerq Passementiers.

The three bas-relief plaster over-doors represent profiles of three of France’s great statesmen of the Old Regime: Sully, Colbert, and Louvois. They are later additions.

The mantelpiece is a beautiful example of “griotte d’Italie” marble. It is original to the room and was carved, as were all mantelpieces in the suite of rooms of the diplomatic salons, from marble from the King’s personal reserve, a proof of Saint-Florentin’s personal relationship with Louis XV. It was originally decorated with bronze elements which have since disappeared.

The gilded console table, between the two windows overlooking rue Saint-Florentin, is from the Transition (Louis XV – Louis XVI) period. The Louis XV mantel clock represents an allegory of Geometry.