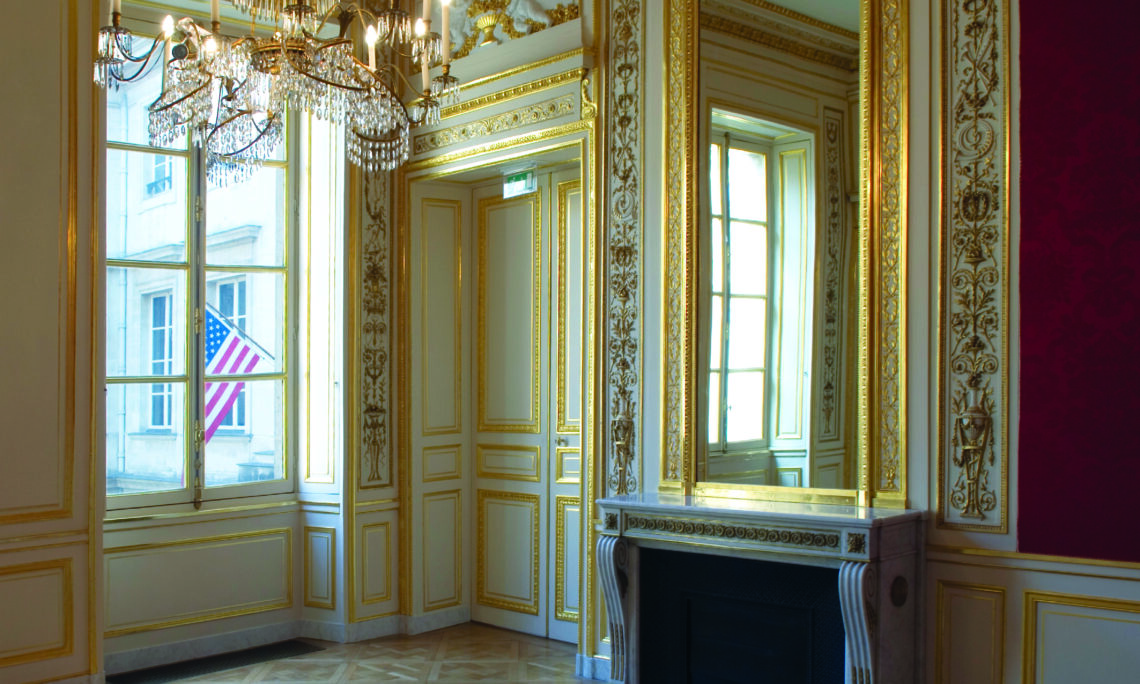 This antechamber is named for Ambassador W. Averell Harriman, who headed the American Administration of the Marshall Plan in Europe in this building between 1948 and 1950.

In the 18th century, this second antechamber had a sober décor. The walls were draped with Beauvais tapestries representing pastoral scenes based on designs by painter François Boucher. The flooring was made of black and white stone.

In the 19th century, the decoration was considerably modified and enriched by the Rothschilds. The tapestries were replaced by a décor of fabric and passementerie, and gilded ornaments were added.

The four sculpted wood panels in this room date from the 18th century. They were bought and installed by the Rothschild family. The original panels were extended with compatible designs to fit the available space. As is the case in the Oval Room, they were originally created in 1771 by Jean-Baptiste Feuillet and Joseph Métivier for the Pavillion at Louveciennes in the Yvelines near Versailles built for Louis XV’s last mistress, Madame du Barry.

The three plaster bas-relief over-doors, one of which was added in the 19th century, represent variations on the theme of a vase flanked by two children holding a garland of flowers, and are attributed to François-Joseph Duret.

The mantelpiece in “blanc veiné” marble, also added in the 19th century, was inspired by the mantelpiece in the Oval Room of the Château de Bagatelle (in the Bois de Boulogne), designed by architect François-Joseph Bélanger. It replaced an earlier monumental heating unit. Finally, as in the two other antechambers, the stone floors were replaced by a parquet floor.

The décor as it appears today draws from the 19th century. The rich crimson fabric that decorates the walls was woven by Tassinari & Chatel in a workshop in Lyon. The Art Nouveau statuette is signed by Marcel Début.