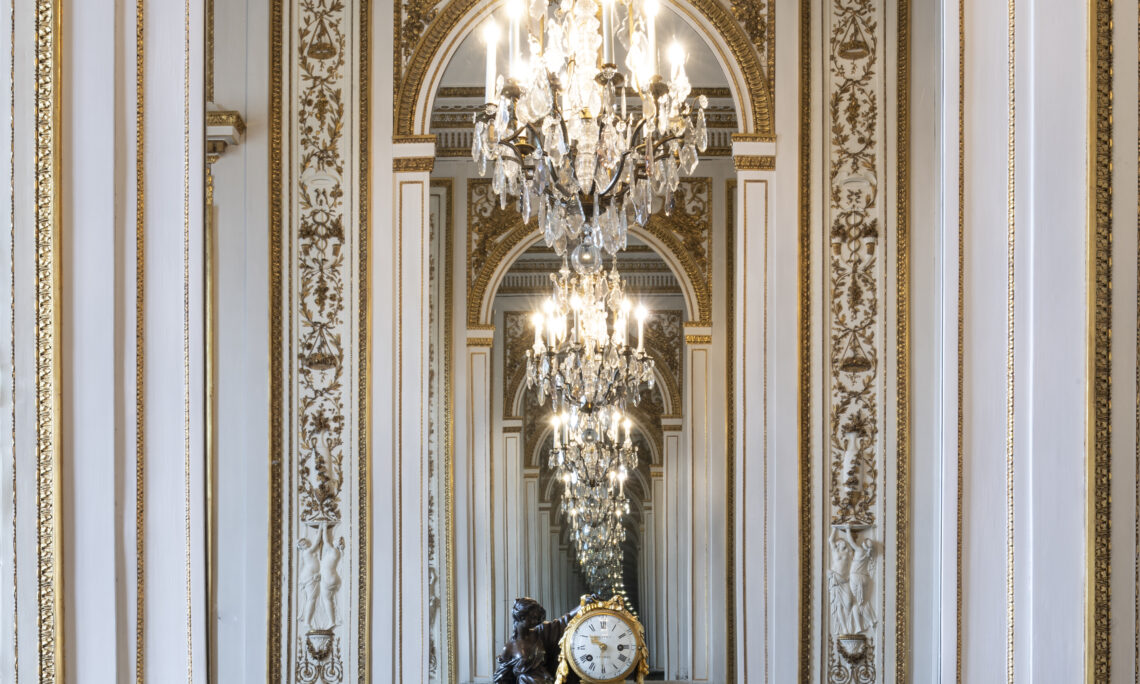 In the 18th century, this room served as a transition between the State Office and the State Bedroom and was used as a place to hold private discussions. In the 19th century, the door between this room and the adjoining courtyard-side antechamber was added. The door replaced a third pier glass mirror.

The four sculpted wood panels representing women figures and arabesques date from the 18th century. They were bought and installed in this room around 1875 by the Rothschilds. As is the case in the Harriman Antechamber, they were originally created for the Pavillion at Louveciennes in the Yvelines near Versailles built for Louis XV’s last mistress, Madame du Barry. They were created in 1771 by Jean-Baptiste Feuillet and Joseph Métivier, two of the main French ornamental sculptors of the second half of the 18th century, based on design drawings by architect Claude-Nicolas Ledoux. They are among the finest examples of French 18th century decorative art.

The exquisite wood carvings over the mirrors, mantelpiece and pier glass were sculpted by artist François-Joseph Duret. The two over-doors facing each other are original to the building. The third one was created in the 19th century when the extra door was added.

During the last restoration campaign, the wood wall panels were restored to their original gray color, all traces of 19th century alterations to the original gilding were removed, and the delicate sculpted wood panels and ornaments were carefully restored.

The mantelpiece is in “vert campan” marble. The mantel clock is similar in style to the one described in the 1777 inventory made at the time of Saint-Florentin’s death, which mentions a clock placed on books with a figure representing Urania, Greek goddess of astronomy.

The off-white satin curtains with floral brocade were re-created based on the 1777 inventory. They were woven on a loom according to traditional methods by Tassinari & Chatel in a workshop in Lyon.