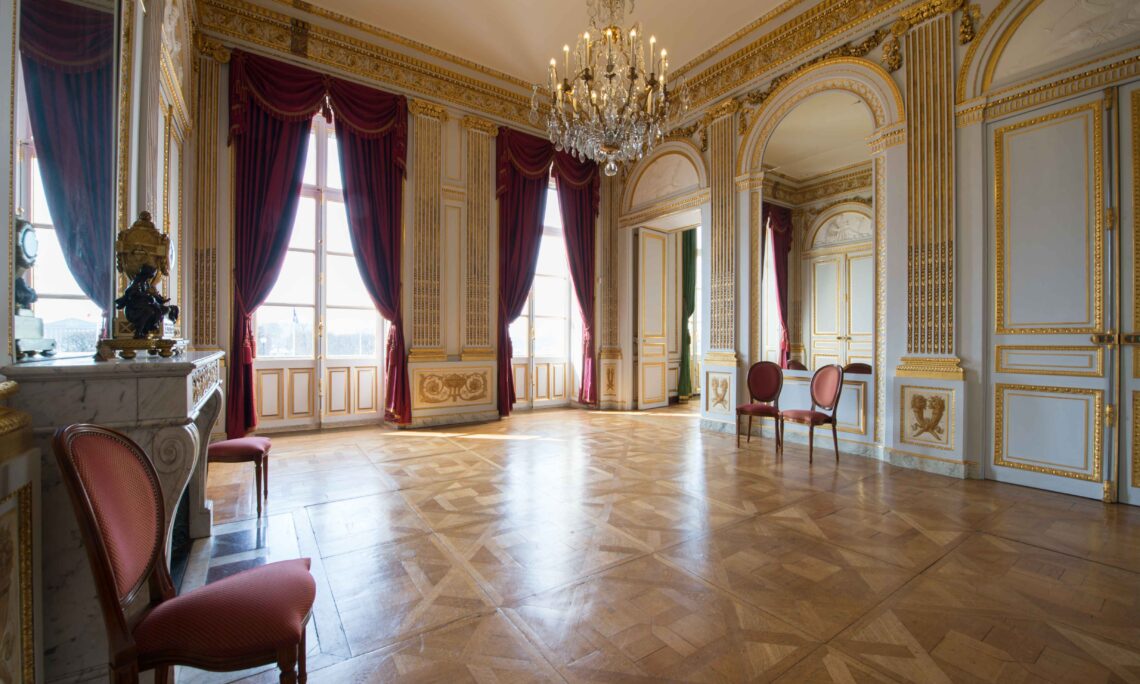 In the 18th century, this room was used to welcome high-ranking visitors for private meetings. The décor was thus meant to reflect the power and influence of Saint-Florentin.

This room is a prime example of Chalgrin’s careful and attentive eye to detail, all of which was designed to demonstrate Saint-Florentin’s opulent taste. The harmony of the décor, combining the light gray paint and gold highlights, was somewhat unconventional for the period. Indeed, backgrounds during this time were generally white with gilding. This color was chosen by Chalgrin specifically for this mansion.

In this room, Chalgrin created a neo-classical interior design, which included colonnades with capitals that would come to define what is today known as Louis XVI style. This décor can be compared to a similar one, created by Chalgrin with the same artists, for the Hôtel de Clermont, Rue de Varenne, which is now on display in the Corcoran Gallery of Art in Washington, DC, where it is presented as the “Salon Doré.”

In a strong architectural statement, the painted wood panels are alternated with fluted pilasters with ionic capitals and brass rod inserts. The delicate cornice is composed of a gilded frieze of floral ornamented scrolls. The painted panels at the basis of each pilaster, with motifs of cornucopia and incense burners are typical of the “etruscan” or “arabesque” style of the 1765-1790 period.

During the last restoration campaign, the painted wood panels were removed, mended, restored to their original gray color, and reinstalled. During this process, conservators uncovered notes and calculations in feet and inches written in coal by the original artisans on the back side of the finished panels. The notes were signed and dated 1769, before the metric system was introduced.

The delicately carved mantelpiece is in “blanc veiné” marble. The Louis XVI style mantel clock dates from the 19th century and is signed Henry Dasson. The curtains of crimson taffeta were re-created based on the 1777 inventory. The passementerie tassels, braids and fringes were created by Declerq Passementiers.