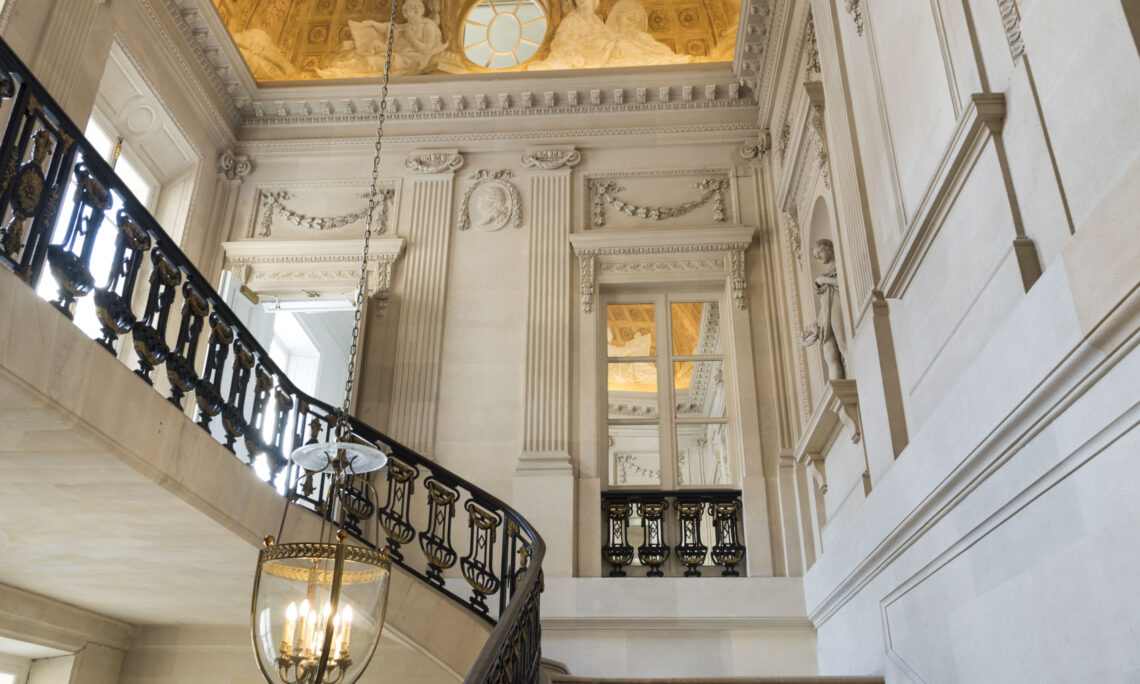 The grand entry is a fine example of the development of the Parisian urban mansion during the 18th century. As a Cabinet member, one of the most influential figures of the reign of Louis XV and a personal friend of the King, the Comte de Saint-Florentin commissioned from Chalgrin a mansion representing his statesmanship. In keeping with tradition, the grand entry was built to invoke harmony and grandeur.

The grand staircase space rises to the celestial ceiling painting, executed by a then up and coming painter, Jean-Simon Berthélemy, and entitled: “Force accompanied by Prudence bringing to Immortality the Sphere of France.” Barthélemy later painted famous ceilings for the Château de Fontainebleau, Palais du Louvre, and Palais du Luxembourg ; however, few examples of his works remain. 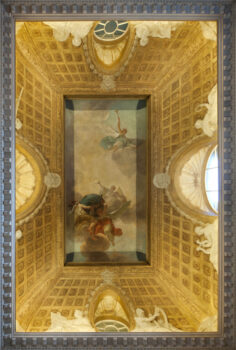 The floor of the vestibule and staircase is made of black marble and “pierre de liais” stone. Walls are made of stone and stone-stucco. The bannister of the grand staircase is original to the building and was photographed for research on 18th century railings by the French Ministry of Culture. It was created by master metal worker and locksmith Pierre Deumier, based on Chalgrin’s design drawings. Originally, the steel bannister featured a gun-metal finish which was a novelty for the time and contrasted with the bronze accents of the balusters and pilasters. The finish was painted black in the mid-19th century.

The two statues displayed in the niches are by Étienne-Pierre-Adrien Gois, sculptor to the King, and are said to represent “Silence” and “Fame.” They were originally located in the niches on the two sides of the carriage entrance in the courtyard. They were moved to their current location during the first restoration campaign, undertaken in 1984. The two medallions between the pilasters representing Louis XVI and Marie-Antoinette are later additions.