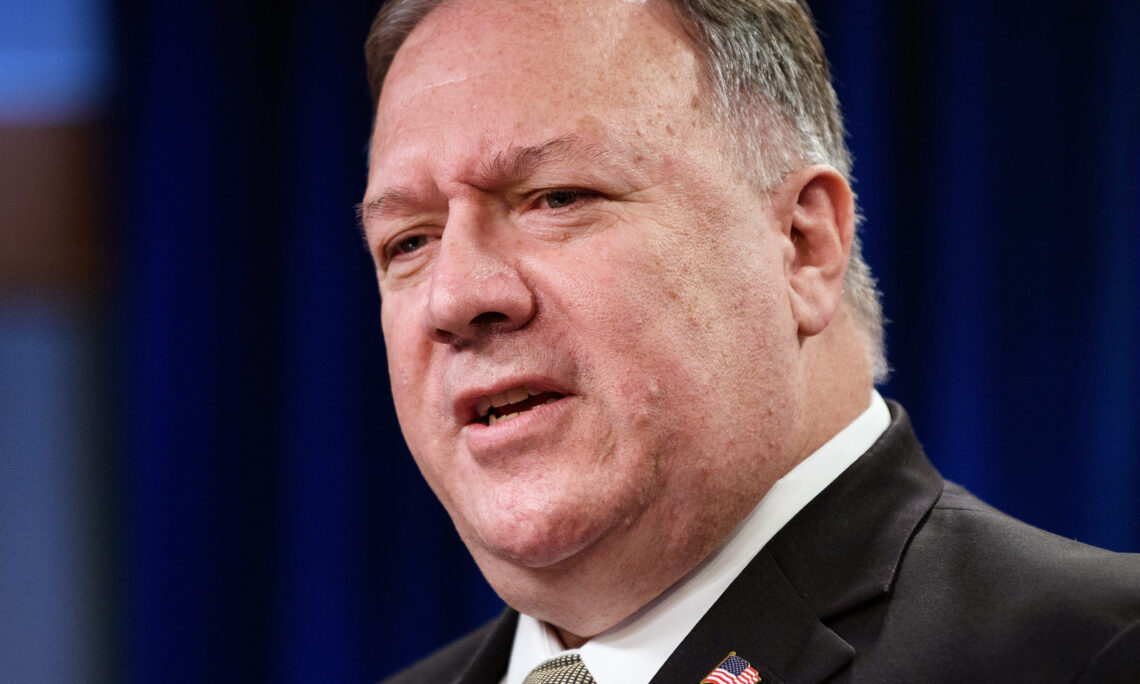 QUESTION:  Good morning and welcome, Mike Pompeo.  We’re very happy to have you on air, Mr. Secretary of State, on the leading radio show in France.

You have been exerting maximum pressure on Iran for three years.  This country lost 80 percent of its oil revenue, but the regime holds on.  What would make you rethink your strategy?

SECRETARY POMPEO:  Well, we believe that the change that President Trump laid out with respect to the Islamic Republic of Iran from the previous administration has been very successful, multiple ways:  One, it’s united the world in the central understanding of the Islamic Republic of Iran as the world’s largest state sponsor of terror.  Second, it has denied enormous wealth and resources to those theocratic, corrupt leaders of that regime, forcing them to make some very difficult decisions – decisions about how they’re going to arm themselves, decisions about how to underwrite Shia militias in Iraq, or the battlefront in Yemen, or Hizballah in Lebanon and in Syria.

This has put real pressure on the regime, and we are hopeful that one day the regime will conclude that it’s in their best interest to change their behavior, to behave like a normal nation, to cease the buildout of their capabilities surrounding their nuclear program, and to re-enter the global community as a player who doesn’t rely on terrorism to advance their own strategic ends.

QUESTION:  Yes, but the other signatories of the nuclear agreement with Iran disagree with your policy.  The Security Council doesn’t agree with it either.  Don’t you feel very lonely with your Iran policy, Mr. Secretary?

SECRETARY POMPEO:  One, you’re right it is important that you enforce the mechanisms that will keep the world safe.  Moreover, very few countries – including the European countries – disagree with the United States on the core principle.  You’ll recall that now, goodness, a few more than 30 days from now, the Islamic Republic of Iran will be permitted under international law to purchase weapon systems and to sell weapon systems.  That’s what the Joint Comprehensive Plan of Action permitted.  And so while the EU has made a different decision about that agreement, they share our concern about the extension of that arms embargo.  Unfortunately, they’ve done nothing yet that would lead us to being able to extend it, so the United States has taken the responsibility.

We are going to act in a way – and we have acted in a way – that will prevent Iran from being able to purchase Chinese tanks and Russian air defense systems and resell weapons to Hizballah to undermine the very efforts that President Macron is ably trying to lead in Lebanon.  It’s irreconcilable that you would permit Iran to have more money, more wealth, and more arms, and still be working to try and help disconnect Hizballah from the disaster that they have created inside of Lebanon.  We have this policy, right, President Trump is committed to it, and we’re going to continue to defend the international order to prevent the Islamic Republic of Iran from returning to its malign activity.

QUESTION:  Yes, but Emmanuel Macron talks to President Rouhani on many issues, including Lebanon and the Hizballah.  Are you opposed to Paris reaching out to Tehran on those subjects?

SECRETARY POMPEO:  Well, look, that’s the French – I know you have connections to Lebanon.  I love that place.  I love the people of Lebanon.  When I was a member of Congress, I represented a wonderful Lebanese community.  To see what Hizballah, under the direct control of the Islamic Republic of Iran, has done to that country saddens me greatly.  And the United States is determined to prevent Iran from continuing to undermine sovereignty of the people of Lebanon, the sovereignty of the people of Iraq, the sovereignty, frankly, of the people of Syria who have been decimated by Iranian support for the Assad regime.  Those are the actions, that’s the reality of the leadership and the regime inside the Islamic Republic of Iran, and the United States is very focused on denying them the capacity, the resources, the money they need to continue to foment such harm, such massive human rights violations on the world.

QUESTION:  Another question, now:  Under your supervision, the Emirates and Bahrain will sign a normalization agreement with Israel this week at the White House.  Who will be the next Arab country to do so?

SECRETARY POMPEO:  Lea, that will be up to each nation, but I appreciate the question.  We have stood the 25, 30 years of American diplomacy on its head.  There was this deep belief inside the foreign policy establishment in the United States – indeed, in most Western countries – that you had to resolve the conflict between the Palestinians and Israel before Arab nations would have a shared view that Israel had a right to exist.  This is very much connected to our Iran policy that we were discussing as well, Lea.  These nations have come to understand that the threat, the harm, the risk to their people doesn’t come from the Jewish state, it doesn’t come from Israel, but rather, comes from the Islamic Republic of Iran.

So they’re – the Bahrainis, the Emiratis have concluded that this is the right time for them to make this historic agreement.  We’ve seen other nations now begun to extend their political diplomatic relationships with Israel without yet full recognition.  We’re convinced that whatever the right sequence is, whatever the right timing is for many of these countries, they will all come to conclude that Israel has a deep and fundamental right to exist and that partnering with them, being friends with them, building out economic and security relationships with the state of Israel is in their best interest.

This is – this is historic.  This is important and will create greater stability all throughout the Middle East and North Africa as a result of the good work that President Trump has done on this particular set of files.

QUESTION:  You are withdrawing troops from Iraq, from Syria, from Afghanistan.  Can we expect zero U.S. soldier in the greater Middle East before next spring?

SECRETARY POMPEO:  We still have many soldiers stationed in lots of parts of the Middle East.  We’ve got a big Air Force base in Qatar.  We’ve got a big naval facility in Bahrain.  But as for the three countries you mentioned, the President has made very clear, we’re going to reduce our forces as quickly as we can consistent with preserving the enormous successes we’ve had countering terrorism, right.

This is the President who said, fine, we’ve got a problem with ISIS.  We’re going to take down the caliphate.  We’ve got a problem Qasem Soleimani directing all of the activity that I had described previously that Iran has engaged in; we’re going to take out Qasem Soleimani.  This is the President who has seriously undertaken protecting not only the United States but other countries from terrorism.  We’ll stay hard at that, but we’re going to do so with a much smaller U.S. footprint.

I was in – I was in Doha this week to watch Afghans for the first time sit in the same room and speak with each other after 19 years and three administrations trying to achieve that very moment.  It was a glorious thing to watch.  The path forward for the Afghans – the negotiations will be hard fought.  They will be contentious, but we started the ability for Afghans to sit in a room together and have a conversation about how to create a successful Afghanistan.  I’m very proud of what President Trump has achieved there.

QUESTION:  Mr. Secretary, President Macron just denounced a few minutes ago – and I’m quoting him – the murder attempt against the Russian opponent Alexei Navalny.  He said it was a poisoning and asked President Putin to give full explanations about this case.  What about you?  Are you also condemning this murder attempt?

SECRETARY POMPEO:  So I have not seen those remarks by President Macron, but I have said, as has the National Security Advisor here in the United States, that we’re concerned about what happened.  We believe this poisoning deserves a full and complete investigation.  And we have asked that all countries participate in coming to a conclusion about how these chemicals got into the system of Mr. Navalny.  And we ask the Russians to help make sure that the world comes to understand how such a thing could possibly have happened.

SECRETARY POMPEO:  We hope every nation in the world will come to recognize what is the – perhaps the greatest stain on human rights of this century, what’s taking place in Western China.  And so the United States has always stood for human rights.

We’ve always said that when human rights are under risk, whether it’s the inability to practice one’s religion and one’s faith or the simple ability to speak and exercise the basic rights of conscience, that the United States has a role in making clear that that’s unacceptable.  It’s what we’ve done with respect to what’s taking place in western China.  It’s what we’ve done in other parts of the world.  It’s what we hope and we expect other nations around the world.  And we think the Europeans understand this risk in the same way that we do.  We hope that they’ll take actions that reflect the seriousness with which these human rights violations need to be viewed.

SECRETARY POMPEO:  The President’s been very engaged, I’ve been very engaged, and my whole diplomatic team has been very engaged in this as well.  In fact, I was in Cyprus less than, goodness, 48 hours ago in that very Eastern Mediterranean working on this problem set.  We’ve spoken – the President’s spoken both with President Erdogan and Prime Minister Mitsotakis urging them to resolve their conflicts, their maritime dispute in a way that’s appropriate, consistent with international law.  There are ways to resolve those maritime disputes.  The answer isn’t through bullying or intimidation or use of military power, but through the normal mechanisms of the resolution of international disputes, especially those over rights associated with the – there’s a set of rules.  There’s a process.  We’ve urged every nation to reduce the tension, reduce their military footprint, and engage in a way that is diplomatic, not military.

SECRETARY POMPEO:  I’ll speak to the relationship that I’ve observed as I’ve worked with my counterpart Foreign Minister Le Drian and the other French leaders.  There are so many places where our shared values override all of the places where we find disagreements.  I’m familiar with the history.  The United States and France have often had disagreements tactical in nature or disagreements about process.  I’ll take the Islamic Republic of Iran.  I think the French share our concerns about Iran but have just chosen a different path, a different process.  Those are to be expected too – sovereign nations with different cultures and different histories.  But I don’t think anyone should ever underestimate the relationship between our two countries, the shared values that our two nations share, and our ability to work together to deliver good outcomes for both of our peoples.

QUESTION:  Last question.  You of course support President Trump’s re-election.  Are you confident despite the latest polls?

SECRETARY POMPEO:  Oh, I don’t want to comment on the election.  The American people will get this right.

QUESTION:  And one last question, please.  On the COVID crisis, why are you hitting so hard on WHO?

STAFF:  This is State Ops.  Parties, pardon the interruption.  The Secretary’s staff asks that the call be wrapped up.

QUESTION:  Thank you.  Can I say bye-bye or no?

SECRETARY POMPEO:  Thank you very much for your time today.

QUESTION:  Thank you.  Thanks a lot.

SECRETARY POMPEO:  Thank you.  Good luck.  Have a good day.