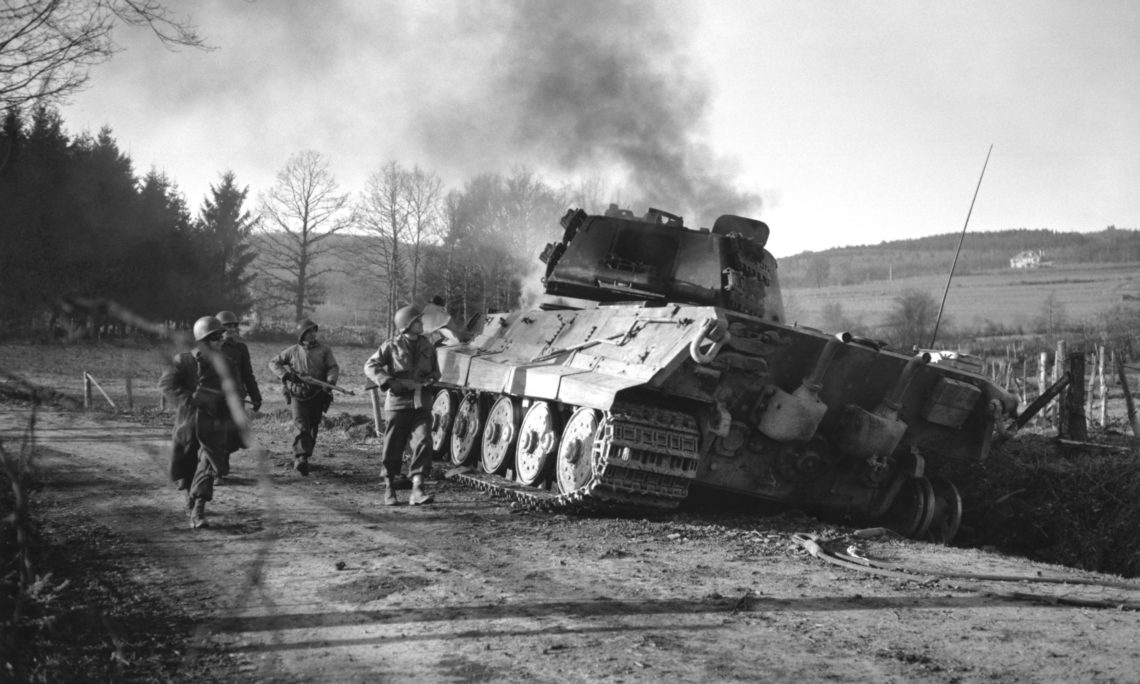 American soldiers pass an abandoned and burning German Tiger tank, which may have simply run out of gas before being wrecked, as they patrol outside La Gleize, Belgium, late Dec. 1944 or early Jan. 1945. (AP Photo/Peter J. Carroll)

On December 16, 1944, Nazi forces launched their last major offensive campaign on the Western Front of World War II, deep in the Ardennes Forest.  In what would become known as the Battle of the Bulge, the United States and Allied Forces unleashed one of the most consequential—and tenacious—operations in modern military history.  Today, we remember the more than 500,000 brave patriots who faced unimaginable peril, including the more than 19,000 who laid down their lives in the gallant stand against tyranny and oppression that would ultimately liberate Europe from Nazi control and secure a victory for the forces of freedom.

Following the arrival of the monumental Allied victory on D-Day, the Nazis knew the momentum of World War II had swung against them.  In their last effort to turn the tide of the war, they once again underestimated the resiliency and grit of the American troops.

Despite frigid temperatures and the Nazis’ initial success in breaking the American front, our forces fought with the dauntless fortitude that has defined our military men and women since the founding of our great country.  They were led by some of our Nation’s most revered military leaders, but it was ultimately their intrepid and indomitable spirit that fueled our victory.  From Elsenborn Ridge and Clervaux to the critical road junctions of St. Vith and Bastogne, Americans fought furiously to slow the Nazi advances, and in doing so they achieved what British Prime Minister Winston Churchill referred to as “undoubtedly the greatest American battle of the war,” which he predicted would be regarded as “an ever-famous American victory.”

Seventy-five years later, we honor the remarkable bravery of the valiant heroes who fought in the “Battle of the Bulge.”  Part of the Greatest Generation, their sacrifices cemented a legacy of proud service and deep devotion to country that will continue to inspire generation after generation of their fellow Americans.