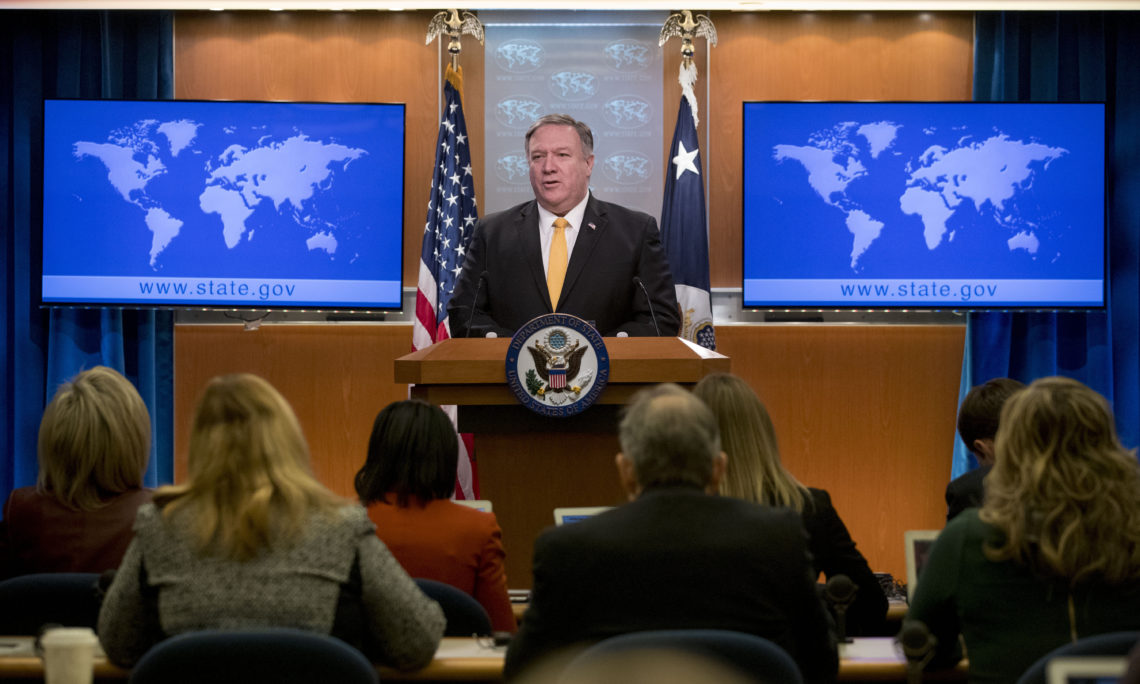 SECRETARY POMPEO: Good morning, everyone. At the core of President Trump’s foreign policy are a few very, very simple truths. The security of the American people must be our greatest consideration, the agreements into which we enter must serve American interests, and countries must be held accountable when they break the rules. For years, Russia has violated the terms of the Intermediate-Range Nuclear Forces Treaty without remorse. To this day, Russia remains in material breach of its treaty obligations not to produce, possess, or flight-test a ground-launched intermediate-range cruise missile system with a range between 500 and 5,500 kilometers. In spite of this violation, for almost six years the United States has gone to tremendous lengths to preserve this agreement and to ensure security for our people, our allies, and our partners. We have raised Russia’s noncompliance with Russian officials, including at the highest levels of government, more than 30 times, yet Russia continues to deny that its missile system is noncompliant and violates the treaty.Russia’s violation puts millions of Europeans and Americans at greater risk. It aims to put the United States at a military disadvantage, and it undercuts the chances of moving our bilateral relationship in a better direction. It’s our duty to respond appropriately. When an agreement is so brazenly disregarded and our security is so openly threatened, we must respond. We did that last December when the United States, with strong support from all of our NATO allies, formally declared Russia in material breach of the treaty. I also then provided notice that unless Russia returned to full and verifiable compliance within 60 days, we would suspend our obligation under that treaty. We provided Russia an ample window of time to mend its ways and for Russia to honor its commitment. Tomorrow that time runs out. Russia has refused to take any steps to return real and verifiable compliance over these 60 days.

Russia has jeopardized the United States security interest, and we can no longer be restricted by the treaty while Russia shamelessly violates it. If Russia does not return to full and verifiable compliance with the treaty within this six-month period by verifiably destroying its INF-violating missiles, their launchers, and associated equipment, the treaty will terminate.

Before I close, I want to give a special thanks to our NATO allies who have stood with us in our mission to uphold the rule of law and protect our people. Their solidarity reflects the historical strength and unity of the NATO alliance. Their support is good for our shared security, it’s good for trans-Atlantic unity, and it’s good for international peace and security. President Trump is grateful for all that you have done.

The United States is hopeful that we can put our relationship with Russia back on a better footing, but the onus is on Russia to change course from a pattern of destabilizing activity, not just on this issue but on many others as well. The United States stands ready to engage with Russia on arms control negotiations that advance U.S. and allied and partners’ security, and are verifiable and enforceable. It must also include all the partners that must all responsibly comply with their obligations. As we remain hopeful of a fundamental shift in Russia’s posture, the United States will continue to do what is best for our people and those of our allies.

I’m happy to take a couple of questions this morning.

QUESTION: Mr. Secretary, one of the big things that everyone is worried about is that this could eventually spark an arms race. What are you doing to prevent that? How concerned are you that Russia will not engage in that six months and that it could see this posture as a threat and take it on?

SECRETARY POMPEO: Well, the very risk that you identified is the one that we are suffering from today. The Russians are in violation of the agreement. That is, their commitment – this agreement that’s been in place for an awfully long time – the Russians have been violating. That is, they have begun to move towards what it is – that risk you actually have just identified. And you heard me this morning: We’ll continue to have conversations with them. We hope they’ll come back into compliance. We’ve had conversations at every level, at the senior levels, at technical levels, conversations about the nature of these systems. There’s no mistaking that the Russians have chosen to not comply with this treaty and present the risk of continued arms growth in a way that they had committed to back when they signed this treaty that they would not do, and if you just have one party to a treaty complying, you’re down the path that you describe.

We will continue to work with the Russians to achieve an outcome that gets us to a place. President Trump very much wants to have an agreement that is verifiable and enforceable on these systems and I hope we can convince the Russians it’s in their best interest as well. We certainly think that it is.

QUESTION: Sir, the Trump administration has withdrawn from agreements it doesn’t like, the JCPOA, and now you’ve indicated your intentions on INF because of the Russian alleged violation, but the question is whether – what new agreements can be worked out to take their place. The Russians have said they’re prepared to discuss a New START extension. The treaty expires in two years, which is not a lot of time if the administration plans to take a new approach. When will the United States be prepared to discuss the future of strategic arms control, and what is your vision of how to go about eliminating or reducing the world’s most dangerous arms?

SECRETARY POMPEO: Yeah, these are incredibly important questions. I would wager to say that President Trump has put this risk of proliferation as his highest American national security interest, and we’re endeavoring to do everything we can to ensure that the risks of proliferation that increase in these massively destructive weapons systems is diminished. But, Michael, it does no good to sign an agreement if a party’s not going to comply with it. The piece of paper, if it’s not being complied with, is – doesn’t reduce the risk, it doesn’t take down that threat. To the people around the world, the INF document today is being violated by the Russians. That is, the very agreement that they signed up for. We didn’t force them into the agreement; they decided this was in their best interest. They’ve now decided it’s not in their best interest to comply with that agreement.

So we are prepared to enter into negotiations on these complex arms control issues all around the world, including conversations about the renewal of other arms control agreements as we move forward. But make no mistake about President Trump’s mission set. President Trump’s mission set is to make sure that any agreement that we entered into has America’s best interest – that is, it protects the American people, protects our allies around the world as well, and has provisions that other countries are both capable and willing to comply with, and allow us to verify that they have complied with those agreements. Absent that, it’s just sitting around a table talking. It is incredibly important that we make sure that the provisions of these agreements are enforceable and verifiable, and that’s our aim. That’s our aim in every set of important arms control discussions that this administration will engage in.

Thank you all. Have a great day.