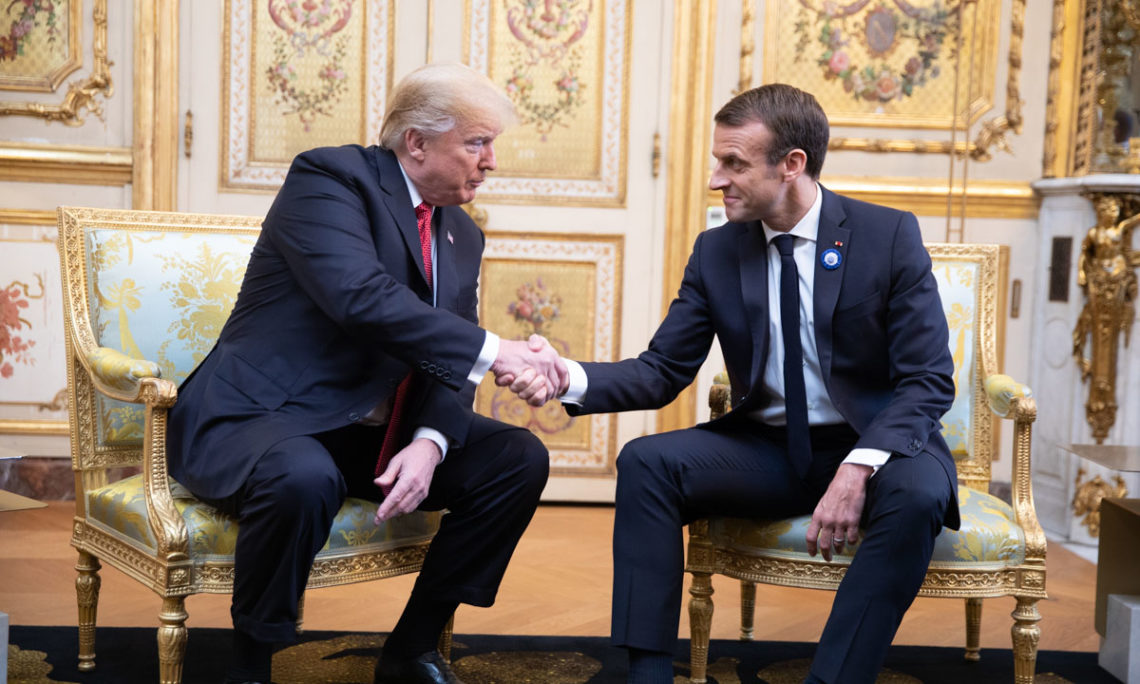 PRESIDENT MACRON:  I wanted to welcome my good friend, President Trump, and wanted to thank you for this visit after a very important time in your domestic policy.

I do appreciate the fact that you came here, Donald, after your visit for Bastille Day in 2017, and now our state visit in Washington beginning of this year.  I think it’s very important to celebrate our soldiers and the great solidarity between our two nations.  And we are the best (inaudible) allies, and this is what I told our people.

Obviously, we will discuss about a lot of topics: Iran, Syria, Yemen, Africa, trade, climate, and a lot of common global issues.  And, obviously, we will discuss about our defense cooperation, which is very important.  And I do share President Trump’s views that we need a much better burden sharing within NATO, and that’s why I do believe that my proposals for European defense are totally consistent with that, because it means more Europe within NATO, more capacity, in order to take our part of the burden.  And I think it’s very fair and it’s very important.

So thanks very much, Donald, for being here.  This is our pleasure.  And our people are very proud to have you here, and I want to thank you here today for your solidarity 100 years ago, and your constant solidarity for precisely our people.

PRESIDENT MACRON:  Thank you very much.

PRESIDENT TRUMP:  Well, I very much appreciate that, Mr. President.  And we have become very good friends over the last couple of years.  We have much in common in many ways — perhaps more ways than people would understand.  But we are — we’re very much similar in our views.

And I appreciate what you’re saying about burden sharing.  You know what my attitude has been, and we want a strong Europe.  It’s very important to us to have a strong Europe.  And whichever way we can do it the best and most efficient would be something that we both want.

And we’re also very much focused — the President and I — on terrorism.  Terrorism is a very big subject for both of us.  And we see what’s going on in the world, and it’s not a good picture.  But we’ve made a lot of progress.  We’ve done things together that were quite bold, recently, six months ago.  Very bold.  And terrorism will be a big factor and a big part of our discussion today.

So I want to thank everybody for being here.  And, Mr. President, thank you very much.

Q  Mr. Trump, you said you felt insulted by what Mr. Macron say about Europe making its own defense.  Could you explain?

PRESIDENT TRUMP:  We’re getting along from the standpoint of fairness, and I want it to be fair.  We want to help Europe but it has to be fair.  Right now, the burden sharing has been largely on the United States, as the President will say, and he understands that.  And he understands that the United States can only do so much, in fairness to the United States.
So we’ve — we’re rebuilding our military.  We just had approved $716 billion.  The year before that, we had $700 billion.  So we’re almost completely rebuilding our military with the latest and the greatest.

And we want — we just want — we want to absolutely be there.  We want to help.  We want to be a part of it.  But different countries have to also help.  That’s only fair.  And I think the President — we’ve already discussed this — and the President and I very much agree on that.

But it’s unfair to have the European security today being assured just by the United States, and we need a much better burden sharing.  That’s why I do believe that we need more European capacities, more European defense, in order to take this part of the burden.  When President Trump has to protect or to defend one of the states of the United States, he doesn’t ask France or Germany, or another government of Europe to finance it.