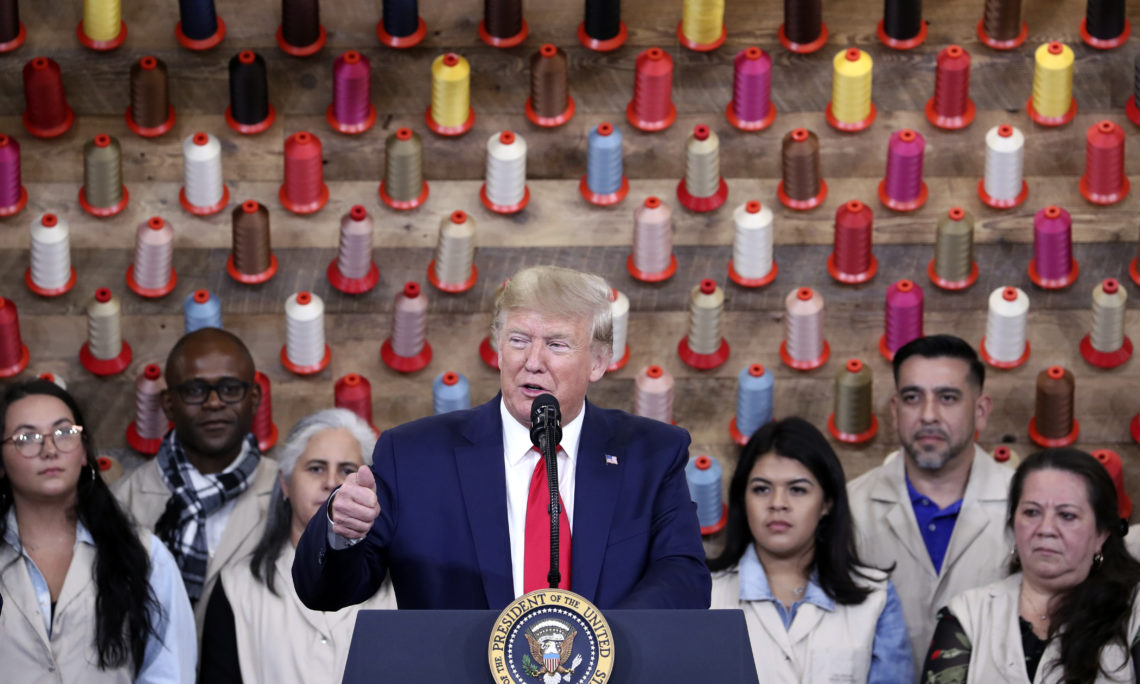 at the Opening of the Louis Vuitton Workshop-Rochambeau | Alvarado, TEXAS

Thank you very much, everybody.  Very, very much appreciated.  We’ve had a tremendous day today in the Middle East.  We were a little bit unconventional, and we did something that nobody has been able to do for many, many years.  They’ve been trying to put things together.  So we went the unconventional way, and they had some fighting and they said, “We don’t like this fighting too much.  This is a little more difficult than people thought.”

ISIS is totally under control, and we’re continuing to capture more.  We have a tremendous situation worked out in so many different ways.  And it’s an honor to have been involved in it.

I want to thank Vice President Pence and Secretary of State Pompeo.  They traveled through the night.  I don’t know how safe this travel was.  I had a lot of different reports going on.  But they got there, and they did a fantastic job.

We sent some early representatives to the site and the area where they negotiated, and we made a deal that’s, I think, in the best interest of civilization.  It’s beyond Turkey and beyond Syria and beyond all of the countries that could have been involved in a disastrous war where millions of people could’ve been killed.  Millions and millions of people could’ve been killed.  And we were able to do something, and I think we’ll get it done, and I think now we get it done.

So we have a pause for a period of time — a ceasefire, a pause.  And during that pause, a lot of things are happening.  Already, they’re starting to happen.  People want to see it happen.  And it was a great thing.  So I just wanted to thank everybody.

And, Bernard, I want to thank you for the incredible job you do.  You’re one of the truly great business people but, really, visionaries.  It’s much more than a business person.  I know a lot of great business people, but they’re not necessarily visionaries.  There are very few.  You’re an artist and a visionary, and I want to congratulate you because this is a great vision that you had for the state of Texas and for our country.  (Applause.)  Thank you very much.

Today, we continue the extraordinary revival of American manufacturing, and we proudly celebrate the opening of the brand-new Louis Vuitton — a name I know very well.  (Laughter.)  It cost me a lot of money over the years.  (Laughter.)  It’s a workshop right here in Johnson County, Texas.

We have Commerce Secretary Wilbur Ross.  Wilbur, thank you.  (Applause.)  Labor Secretary Gene Scalia.  Gene.  (Applause.)  Thank you.  Thank you, Gene.  And a very good friend of mine who’s been with me right from the beginning, and somebody that’s going to be going, I guess, at the end of the year.  I’m going to miss you so much.  A man who has been your long-term, talented governor, Energy Secretary Rick Perry.  Rick, fantastic job.  (Applause.)  Fantastic.  Stand up, Rick.  He’s done a fantastic job for a long period of time, and we really appreciate it.

The Department of Energy has far, far progressed from those days three years ago when you took it over.  So, thank you very much.  We’ll be announcing the replacement.  And he, I think — it’s a “he” in this particular case — I think he’ll do a fantastic job.  We worked on that together.  Right, Rick?  So thank you very much.

But we’re especially grateful to Bernard and everyone at Louis Vuitton and the Louis Vuitton family: Alexander — I’ve gotten to know Alexander.  He is going to be something.  I don’t know, he may surpass you.  Do you mind that?  No, I don’t think so, right?  (Laughter.)  He’s a special young man.  And Global Chairman — thank you very much, Alexander.  Where are you?  We don’t lose him much with that height.  Well, how tall are you, Alex?  (Laughter.)  Huh?  Great.  Great.  Thank you very much.  Great job you’re doing.

And Global Chairman and CEO Michael Burke.  Michael, thank you very much.  Good job.  (Applause.)  Been with the company a long time, I understand.  Four-oh?  Is that true?  Forty?  Forty years.  He said before, he was as tall as Alexander when he started.  (Laughter.)  Great job.

And Chairman and CEO for North America, Anish Melwani.  Where is — thank you very much.  Great job you do.  (Applause.)

Also, the President and CEO of Louis Vuitton Americas Zone, Lanessa Elrod.  Thank you, Lanessa.  (Applause.)  Thank you very much.

As Bernard mentioned, we met shortly after the election to discuss my vision for creating an American manufacturing renaissance through historic tax cuts, and better trade deals, and deregulation.  And we’re making trade deals like nobody has ever seen before.  We just did one with China, phase one.  We’ll get it signed very quickly, for the farmers.  Far, far bigger than anyone ever thought possible.  Also, financial services and many other things.

But the trade deals we’ve made with South Korea, with Mexico, Canada — assuming the Democrats ever get it passed, which is a question, because they don’t seem to like to make deals very much.  They have to get that one done.  That’s a very important transaction, the USMCA.  And we’re — and has tremendous support.

We’re joined also by Jared and Ivanka, who are both here today as — where is Ivanka?  Jared?  Stand up.  What a good job you do.  (Applause.)  Even though they’re related to me, just slightly, I will tell you, what a job.  Ivanka is responsible for 14 million jobs this year, over the last couple of years, with companies going out and training people.  And it’s been an incredible success.

She started off two and a half years ago; she wanted 500,000 jobs.  That’s a lot.  But it was typical Ivanka.  It ended up — and now, the number, I think it just crossed 14 million jobs going to Walmart, going to ExxonMobil, going to the great companies.  And they train people.  And the numbers are incredible, and that’s one of the reasons that our numbers are so good.  Thank you very much.

And, Jared, great job you’re doing.  Thank you very much, both.

Bernard had faith in that vision — the vision of doing something right here in this incredible state — and promised to bring a brand-new factory to the United States.  And today, wow, has he delivered.  He’s really delivered.  This is some place.

Johnson County is home to some of the hardest-working patriots in America.  Louis Vuitton’s 50-million-dollar investment will be especially big and especially incredible to the small town of Alvarado, a community of fewer than 5,000 people.  And this workshop, as they call it — it’s a very big workshop — it’s a great name though, actually.  I could learn something from you about branding.  I like that.  (Laughter.)  The “workshop.”

But this workshop will soon employ 500 of the most highly skilled workers anywhere in the world.  No one can match the precision and perfection of an American artisan.

Every year, Louis Vuitton will pay more than $26 million in wages, and that number will increase even higher as the facility doubles to 1,000 workers in a very short period of time.

Under my administration, we believe that we can build it, grow it, or make it in the United States.  And we are doing that in record numbers.

Today, we have more people working in the United States that have ever worked in our country before.  Almost 160 million people working with jobs and doing well.

Last year, we saw the biggest increase in manufacturing jobs in more than two decades.  Investments like the one we celebrate today have given the United States the hottest economy anywhere on Earth.  Nobody close.

Since the election, we have created more than 6.4 million jobs.  We have gained 775,000 new jobs here in Texas, including more than 70,000 manufacturing jobs.  Nearly 7 million Americans have been lifted off food stamps.  Median household income has increased by $1,400 to a new all-time high.  And median — I don’t know if you’ve seen this, but it was out yesterday — median household income, it’s more than $5,000 higher, and that doesn’t include the tax cuts, which is another $2,000.  That’s something.  (Applause.)  That’s something.

Our senators — I mean, we have really — we’ve got some fantastic people: Ken, everybody.  We’ve really done a brilliant job.  Led by the former governor, as we said.  Because Rick was — what were you?  Twelve years, Rick, right?  Twelve years as the — how much?

We’ve ended the war on American energy.  America is now the number-one producer of oil and natural gas in the world, with Texas producing 30 percent more natural gas and 60 percent more oil.  And that means more jobs, higher wages, and lower prices at the pump.  It’s an incredible number.

We’re forging a new trade agenda based on fairness and reciprocity — maybe my favorite word: “reciprocal” trade.  That includes replacing NAFTA — which was a terrible deal — with a brand-new USMCA, which, if adopted, will be a massive win for the state of Texas, its ranchers, its growers, producers, farmers, and factory workers.

Companies around the world are realizing that there’s never been a better time to hire, invest, build, and grow in the United States of America.  This is the hottest time we’ve ever had.  It’s incredible what’s happening in our country.

To maintain our nation’s competitive advantage, my administration started the Pledge to American Workers.  Thanks to, again, Ivanka’s leadership, in this case, private sector partners are going to be producing many, many more jobs over a very short period of time.

And today, I’m pleased to announce that Louis — Louis Vuitton is also signing the Pledge, ensuring an opportunity for all 1,000 Texas workers here in Johnson County.  And I want to thank you.  So we have 1,000 more workers that we can add onto the list.  (Applause.)  Louis Vuitton, thank you.  (Applause.)

And it’s truly fitting that the name of this facility is Rochambeau Ranch, named for the French general who helped General George Washington win the decisive battle of the American Revolution and secure American independence.  That’s great.

Today, France remains not only our oldest ally, but one of our most trusted and cherished.  We have a great relationship with France.  We have our little disputes with Emmanuel every once in a while.  Say hello to Emmanuel.  (Laughter.)  But we’re doing very well, and France is a great country and a wonderful group of people.  We have a lot of fun.  And I do — I like — I like your President very much, actually.

Today, with the help of a great French partner, we are achieving a true victory for the people of Texas and the United States.

Once again, I want to express my deep appreciation to everyone at Louis Vuitton and to all of our incredible, devoted, skilled, and beloved American workers.

And it’s now my honor to cut the ribbon and officially welcome Louis Vuitton to the great state of Texas.