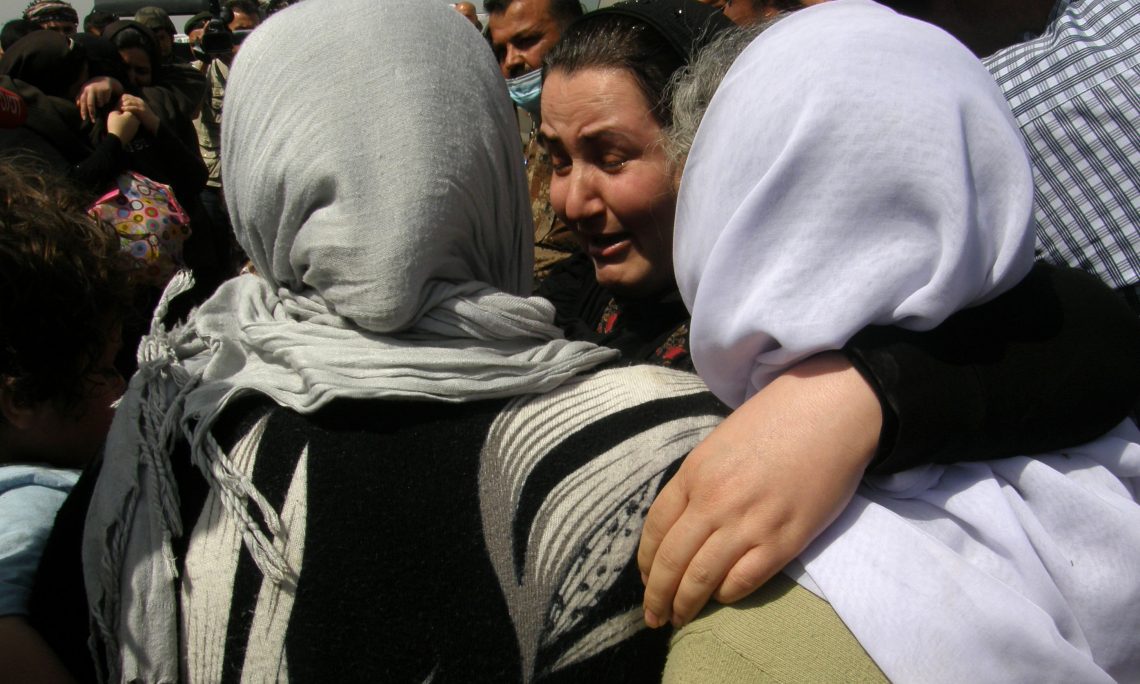 Remarks on Daesh and Genocide

In 2014, the terrorist group Daesh began to seize territory in Syria and Iraq, overrunning major cities and committing atrocities. The United States responded quickly by denouncing these horrific acts and – more importantly – taking coordinated actions to counter them. In September of that year, President Obama mobilized an international coalition, now 66 members strong, to halt and reverse Daesh’s momentum. And that is what we are doing.

In the 18 months since, coalition airstrikes have helped to liberate Kobani, Tikrit, Ramadi, and other key cities and towns. We have pushed the terrorists out of 40 percent of the territory that they once controlled in Iraq and 20 percent in Syria. We have degraded their leadership, attacked their revenue sources, and disrupted their supply lines. And currently we are engaged, as you all know, in a diplomatic initiative aimed at trying to end the war in Syria. That civil war fuels Daesh, and in doing what we are doing now, we are working to further isolate, to weaken and ultimately to defeat them. We are working intensively to stop the spread of Daesh and its affiliates within and beyond the region.

All of this constitutes an extraordinary effort by a large segment of the international community and the United States. And that effort is fully warranted by the appalling actions of the organization that we oppose.

My purpose in appearing before you today is to assert that, in my judgment, Daesh is responsible for genocide against groups in areas under its control, including Yezidis, Christians, and Shia Muslims. Daesh is genocidal by self-proclamation, by ideology, and by actions – in what it says, what it believes, and what it does. Daesh is also responsible for crimes against humanity and ethnic cleansing directed at these same groups and in some cases also against Sunni Muslims, Kurds, and other minorities.

I say this even though the ongoing conflict and lack of access to key areas has made it impossible to develop a fully detailed and comprehensive picture of all that Daesh is doing and all that it has done. We have not been able to compile a complete record. I think that’s obvious on its face; we don’t have access to everywhere. But over the past months, we have conducted a review of the vast amount of information gathered by the State Department, by our intelligence community, by outside groups. And my conclusion is based on that information and on the nature of the acts reported.

We know, for example, that in August of 2014 Daesh killed hundreds of Yezidi men and older women in the town of Kocho and trapped tens of thousands of Yezidis on Mount Sinjar without allowing access to food, water, or medical care. Without our intervention, it was clear those people would have been slaughtered. Rescue efforts aided by coalition airstrikes ultimately saved many, but not before Daesh captured and enslaved thousands of Yezidi women and girls – selling them at auction, raping them at will, and destroying the communities in which they had lived for countless generations.

We know that in Mosul, Qaraqosh, and elsewhere, Daesh has executed Christians solely because of their faith; that it executed 49 Coptic and Ethiopian Christians in Libya; and that it has also forced Christian women and girls into sexual slavery.

We know that in areas under its control, Daesh has made a systematic effort to destroy the cultural heritage of ancient communities – destroying Armenian, Syrian Orthodox, and Roman Catholic churches; blowing up monasteries and the tombs of prophets; desecrating cemeteries; and in Palmyra, even beheading the 83-year-old scholar who had spent a lifetime preserving antiquities there.

We know that Daesh’s actions are animated by an extreme and intolerant ideology that castigates Yezidis as, quote, “pagans” and “devil-worshippers,” and we know that Daesh has threatened Christians by saying that it will, quote, “conquer your Rome, break your crosses, and enslave your women.”

Shia Muslims, meanwhile, are referred to by Daesh as, quote, “disbelievers and apostates,” and subjected to frequent and vicious attacks. In December, a year ago, a 14-year-old boy named Usaid Barho approached the gate of a Shiite mosque in Baghdad, unzipped his jacket to show that he was wearing an explosive vest and he surrendered to the guards. He had been recruited by Daesh in Syria, and joined to serve Islam, but he was told after his recruitment that, unless he obeyed every order, Shiites would come and rape his mother. Daesh said of Shias, and I quote, “It is a duty imposed upon us to kill them, to fight them, to displace them, and to cleanse the land of their filth.”

One element of genocide is the intent to destroy an ethnic or religious group, in whole or in part. We know that Daesh has given some of its victims a choice between abandoning their faith or being killed, and that for many is a choice between one kind of death and another.

The fact is that Daesh kills Christians because they are Christians; Yezidis because they are Yezidis; Shia because they are Shia. This is the message it conveys to children under its control. Its entire worldview is based on eliminating those who do not subscribe to its perverse ideology. There is no question in my mind that if Daesh succeeded in establishing its so-called caliphate, it would seek to destroy what remains of ethnic and religious mosaic once thriving in the region.

I want to be clear. I am neither judge, nor prosecutor, nor jury with respect to the allegations of genocide, crimes against humanity, and ethnic cleansing by specific persons. Ultimately, the full facts must be brought to light by an independent investigation and through formal legal determination made by a competent court or tribunal. But the United States will strongly support efforts to collect, document, preserve, and analyze the evidence of atrocities, and we will do all we can to see that the perpetrators are held accountable.

I hope that my statement today will assure the victims of Daesh’s atrocities that the United States recognizes and confirms the despicable nature of the crimes that have been committed against them.

Second, I hope it will highlight the shared interest that otherwise diverse groups have in opposing Daesh. After all, the reality of genocide underscores even more starkly the need for a comprehensive and unified approach to defeating Daesh both in its core in Syria and Iraq and more broadly in its attempt to establish external networks.

Part of our response to Daesh must, of course, be to destroy it by military force, but other dimensions are important as well, and we dare not lose track of that. In the past two and a half years, the United States has provided more than 600 million in emergency aid to Iraqis who have been displaced from their communities by Daesh. We are working closely with local authorities to assist in the recovery of cities that have been liberated and whose residents face grave challenges – both material and psychological – and people who desperately need help in rebuilding their lives. We are funding the investigation of mass graves, and supporting care for the victims of gender-based violence and those who have escaped captivity.

We continue to engage with the government of Baghdad to make sure that its security forces and other institutions are more representative and inclusive. And we are coordinating with our coalition partners to choke off Daesh’s finances and to slow its recruitment of foreign fighters. And we are preparing for future efforts to liberate occupied territory – with an eye to the protection of minority communities. In particular, the liberation of Mosul, of Nineveh province in Iraq, and parts of Syria that are currently occupied by Daesh, and that will decide whether there is still a future for minority communities in this part of the Middle East. For those communities, the stakes in this campaign are utterly existential. This is the fight that Daesh has defined. Daesh has created this. Daesh has targeted their victims. Daesh has self-defined itself as genocidal.

So we must bear in mind, after all, that the best response to genocide is a reaffirmation of the fundamental right to survive of every group targeted for destruction. What Daesh wants to erase, we must preserve. That requires defeating Daesh, but it also demands the rejection of bigotry and discrimination – those things that facilitated its rise in the first place.

This means that, as more areas are liberated, residents will need help not only to repair infrastructure, but also to ensure that minorities can return in safety, that they are integrated into local security forces, and that they receive equal protection under the law. Our goal, after all, is not just to defeat Daesh – only to find that in a few years some new terrorist group with a different acronym has taken its place. Our purpose is to marginalize and defeat violent extremists once and for all.

Now, that is not easy; we know that. As President Obama and I have consistently said – it won’t happen overnight. But today, I say to all our fellow citizens and to the international community, we must recognize what Daesh is doing to its victims. We must hold the perpetrators accountable. And we must find the resources to help those harmed by these atrocities be able to survive on their ancestral land.

Naming these crimes is important. But what is essential is to stop them. That will require unity in this country and within the countries directly involved, and the determination to act against genocide, against ethnic cleansing, against the other crimes against humanity must be pronounced among decent people all across the globe.