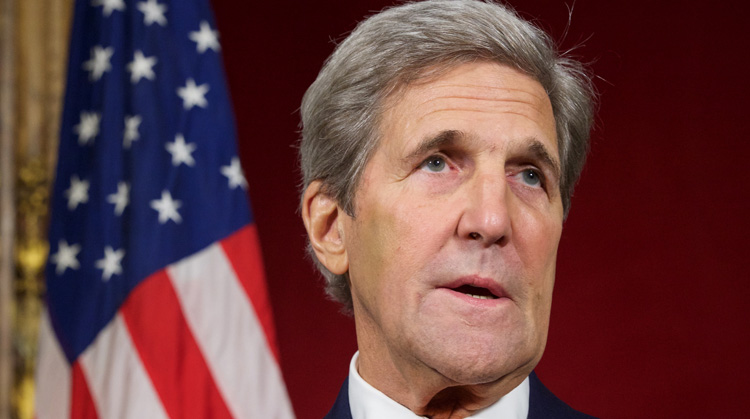 SECRETARY KERRY: One year ago today, China, Russia, Germany, France, Great Britain, the United States, known as the P5+1, succeeded after several years of intensive negotiations in securing an agreement with Iran in order to restrain Iran’s nuclear program in a way that guaranteed to the world that Iran would not be pursuing a nuclear weapon.

From that moment, 19,000 centrifuges have been put under IAEA scrutiny and storage. The Arak plutonium reactor, plutonium – the core of that reactor has been completely dismantled and destroyed. The 98 percent of the stockpile that Iran had of enriched uranium has been moved out of the country, and there is a day-to-day monitoring of the remaining limit to 300 kilograms. The limitation exists today on enrichment at 3.67 percent, and we have an ongoing process of exchange of information and dialogue which is producing a significant ability to be able to monitor effectively, and, if and when there is a question, to be able to deal with those questions.

So as of today, one year later, a program that so many people said will not work, a program that people said is absolutely doomed to see cheating and be broken and will make the more dangerous, has, in fact, made the world safer, lived up to its expectations, and thus far produced an ability to be able to create a peaceful nuclear program with Iran living up to its part of this bargain and obligation.

That is very significant, and what I think it underscores are several things. Number one, the world is safer today because conflict in the region is not calculated on the basis of the potential of a nuclear confrontation or nuclear explosion, and because we have the ability to be able to work through some issues which we’ve seen, for instance with our sailors who stumbled into Iranian waters and within 24 hours we were able to get them out. That could not have happened prior to this agreement having taken place.

It also, I believe, underscores the value of diplomacy itself. And that’s why we will continue to try to work first, before we decide to go into conflict, to see if we can resolve these kinds of problems.

And my final comment is that there are continuing issues. Nobody pretends that some of the challenges we have with Iran have somehow been wiped away. This program was about a nuclear track and about a nuclear program. It was not about the other issues that are involved in the relationships of a number of nations in the region and the United States. So we continue to focus on those issues, whether in Syria or Yemen, on terrorism. There are other real issues, and we will continue and are continuing to focus on those issues. But we believe that the door that has been opened as a consequence of this dialogue gives us an opportunity to be able to do exactly that.

And finally, we need to continue to work and we will continue to work and we have a specially designated ambassador whose day-to-day effort is leading the team to make sure that this deal continues to be lived up to, that we continue to be able to resolve any problems, and that we build on this as an example of what you can do if you marry interests and you marry values in a way that happens to meet the needs of a broader cross-section of countries and people. And I think that’s what we’ve succeeded in doing here.

So we’ll continue to work at it. There are always potential for hiccups, for a moment of questioning about one component or another; but fundamentally, I think the world can take pride in the fact that this multilateral, complicated negotiation has produced a result which makes the region less volatile and makes the world itself safer in terms of nuclear proliferation.

So thank you all. Happy Bastille Day.

MR KIRBY: Thanks for coming, everybody.

QUESTION: Any comments on the leaked Syrian proposal?

SECRETARY KERRY: I don’t right now. I’ll have comments going to Moscow. I’m meeting with President Putin tonight. We’ll have plenty of time to talk about it and I’ll give you all a sense of where we are. Thank you.