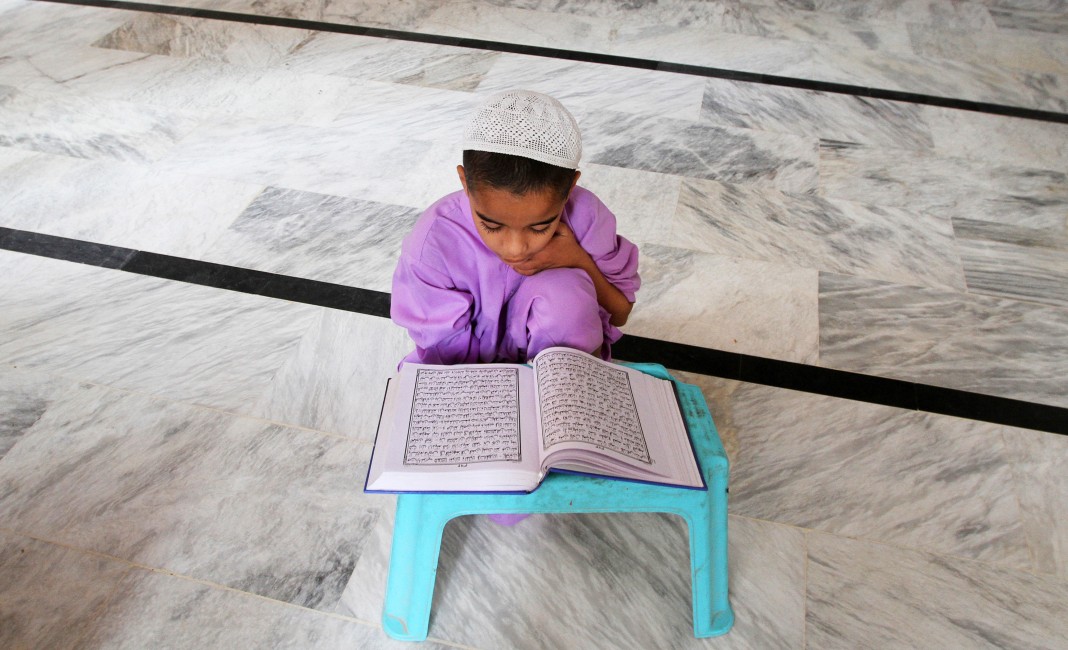 Secretary Kerry at a Reception in Celebration of Eid al-Fitr

SECRETARY KERRY: Thank you. Thank you, Shaarik and thank you, all distinguished guests, everybody, a very good evening to you. Assalamu alaikum.

SECRETARY KERRY: Very, very happy to have you here to celebrate this. I don’t know about Mandy’s prayer to God for my future. I thought he was – (laughter) – I thought he was on my side. (Laughter.)

I really want to begin by expressing my gratitude to Shaarik for his tremendous efforts of outreach, his diligence, his humanity. I also want to recognize Evan Ryan, who does a spectacular job at ECA – ECA, as we call it, she told you what it means – and all that her team does to build strong people-to-people relationships, much in the vein that Mandy was talking about.

And so I don’t want to thank my staff for asking me to speak after Mandy. (Laughter.) But I want to thank Mandy for being here and joining us. He’s a man of many identities, ladies and gentlemen: a brilliant intelligence operative, which he just talked about; a revolutionary in Argentina; a doctor in Chicago; and a guy who spent a lifetime in the revenge business before – (laughter, applause) – before fighting a six-fingered man to death. (Laughter.) But in reality, as every one of you have heard tonight, this is a passionate global citizen, a man who cares deeply. And how many people would take their celebrity and go to a place like Greece and receive people who are coming over in such desperate straits and just want to hold that child and try to make a difference? Mandy, we are deeply grateful to you. Thank you for sharing your thoughts with us tonight. Everybody appreciates it. (Applause.)

So let me be direct, let me be honest with everybody, which is important on a celebration like this, a moment like this. We are obviously gathered to mark a very joyous time of the year. But it is obvious that our happiness is dampened by the knowledge of the horrific terrorist attacks that have taken place around the world in recent weeks.

And I recognize that there is a perception among some that people in the West respond with greater grief when tragedies strike a city like Orlando or Brussels, more so when – than the people are victimized in Dhaka or Istanbul or Medina.

And to the extent – and I won’t argue what that extent may be or not be – but to the extent that it is a perception that has merit with anybody in the world, it should sadden all of us. Because we should – if we’re going to be crystal clear about anything in our hearts at a moment like this, it’s that every life is equally precious, regardless of ethnicity, religion, gender, or nationality. That is what that seal brought us, that’s what people like Benjamin Franklin – and we’re in an age of celebrating Alexander Hamilton – but all of our Founding Fathers were raised with a notion that that is a credo, it’s not just words.

Every family torn apart, every child lost, every future that is cut short by terrorism, should be a source of anguish and pain that should touch everybody.

This is not new to us here. After all, I can remember 1968 so well when Martin Luther King was struck down and Medgar Evers was struck down and Bobby Kennedy was struck down right here in our country that appropriately takes such pride in the freedom that we have. So that sense of place, of belonging of all people, frankly, is as true around the globe as it is here at home in the people that I meet and talk with. And the tragedies in Minnesota, Louisiana, and Dallas should remind us that the American experiment does not add up if we subtract the fundamental principles of equality and individual rights and instead somehow are dragged down to a place where we judge one another on the basis of what we look like or where our families come from or what we might believe as a matter of religion.

We are a nation of laws in a world where the rule of law is often distorted and fragile. And that places a burden on all of us – not unique to Americans, it places a burden on all of us as citizens of this planet to commit ourselves to the idea of fairness, to the understanding that we have to treat others as we would like to be treated ourselves. And that, by the way, is a tenant of every single major religion or philosophy.

Our country was founded on the core notion of fairness and respect for another person’s dignity, for one another’s person and dignity and rights – and we will grow in unity and strength only if we are true to that concept.

And that is why everybody should do all that we can to embrace our diversity, to uphold our values that we all share, including those that Muslims put front and center during Ramadan: charity, compassion, love of family, the pursuit of justice, and a commitment to peace. That is what has been celebrated for the last month and what we now celebrate in one glorious moment in Eid.

American Muslims already act on those values every single day not just as religious leaders or as public servants, but as citizens. Those of you who are in that category do so as lawyers, as laborers, educators, doctors, athletes, entrepreneurs, soldiers, aviators, sailors, Marines, actors – in all forms and walks of life.

And you do so by engaging in educational campaigns to dissuade young people who might be vulnerable to extremist propaganda – and by working with your neighbors to build strong and resilient, patriotic, and law-abiding communities.

And you do so by serving as citizen diplomats.

At this department, we particularly appreciate our global engagement is at its best when we combine the talents of public servants with the perspectives of academics, artists, students, scientists, businesspeople, and more. And we have put that belief to test time and time again.

Yet even when we deploy citizens as our partners in diplomacy beyond our borders, it is also our shared responsibility to welcome those who are in the greatest need here at home.

Many of you are here tonight already filled with this mission. You are front and center in the campaigns to resettle refugees from Syria, Iraq, and elsewhere. And our department has partnered with you to try to address the current crisis – the worst humanitarian catastrophe since World War II. The toll is just staggering. I’ll tell you frankly, the toll is what motivated me to go to Vienna last year in November, call a meeting without knowing if we could come together, call it the International Syria Support Group, and try to fight for a ceasefire, try to fight to see if we can find a road to Geneva and a road to peace.

The fact is that we have partnered with you in this effort. Tonight, I can announce proudly that we will meet President Obama’s goal of welcoming 10,000 Syrian refugees to the United States in the current fiscal year. (Applause.) Now, those are refugees, which is different from normal process of migration and green card and becoming a citizen and so forth. It’s a very different category. It’s also representing six-fold increase over what we did the year before.

I can also announce that, in addition to the 5.1 billion in humanitarian assistance that we have already provided since the start of the Syrian civil war, we will be contributing another 439 million in new aid to support education, health care, and life-saving food and medicine for internally displaced people and refugees immediately. (Applause.)

And I will leave tomorrow morning to go via one stop to Moscow in order to meet with President Putin and Foreign Minister Lavrov to see if we can somehow advance this in the important ways that people want us to. You have my word – all of you – that we will continue doing everything that we can to alleviate the suffering in Syria. We will open up more areas to humanitarian access. We will pursue a political solution that is essential in order to halt the violence and enable families to return their communities and rebuild their lives. And no one – but no one – has explained to me any rationale for how there is anything except, ultimately, a political settlement to this war.

So my hope is that, as we come to a close, at least in the formal part of the speaking with respect to this celebration, that we remember what it means to pay tribute to this notion of citizen diplomacy. At its core, acting as citizen diplomats is fundamentally upholding the values of working with other people to make a positive difference in our communities and the world. It’s not some highfalutin, hard-to-understand concept. It’s pretty straightforward. And there are lot of good folks like Mandy and others among you who do this every single day to make a difference.

What does this look like in our daily lives? Let me tell you for a minute. It’s hundreds of Christian churches coming together to raise funds to resettle refugees. It’s the more than 1,000 rabbis signing a letter welcoming displaced persons to our country. It’s the 7-year-old boy who donated all of the money in his piggy bank to a mosque that was vandalized in Texas. It’s the crowd-funding effort launched in coalition of Muslim leaders, which raised over $75,000 in two weeks to support the victims of the Orlando shooting.

It is these acts of goodwill and generosity in which we see the real character not just of American people – I’m proud to say yes, of the American people – but also of global citizens. It is there that we find the spirit of charity celebrated by Ramadan; there where we drown out the voices of bigotry and persecution, and replace them with a chorus of compassion, inclusivity, openness, and diversity.

Now, some may think that this sort of harmony is really not achievable – it sounds nice, but not achievable in this day and age. Let me remind you, all of you, of what – those of you if you are a skeptic – someone earlier mentioned Muhammad Ali, and I want to mention what the great Muhammad Ali had to say. He said this – very straightforward and about as meaningful as anything I’ve heard in the enterprises that I’m involved in – he said: Impossible is just a big word thrown around by small men who find it easier to live in the world they’ve been given than to explore the power that they have to change it. Impossible is not a fact. It’s an opinion. Impossible is not a declaration. It’s a dare.

So I thank you all for daring to change our country and the world for the better. And I look forward to working with everybody in the months ahead. And if you haven’t picked up that dare, you’d better do it now. Thank you. Take care. (Applause.)