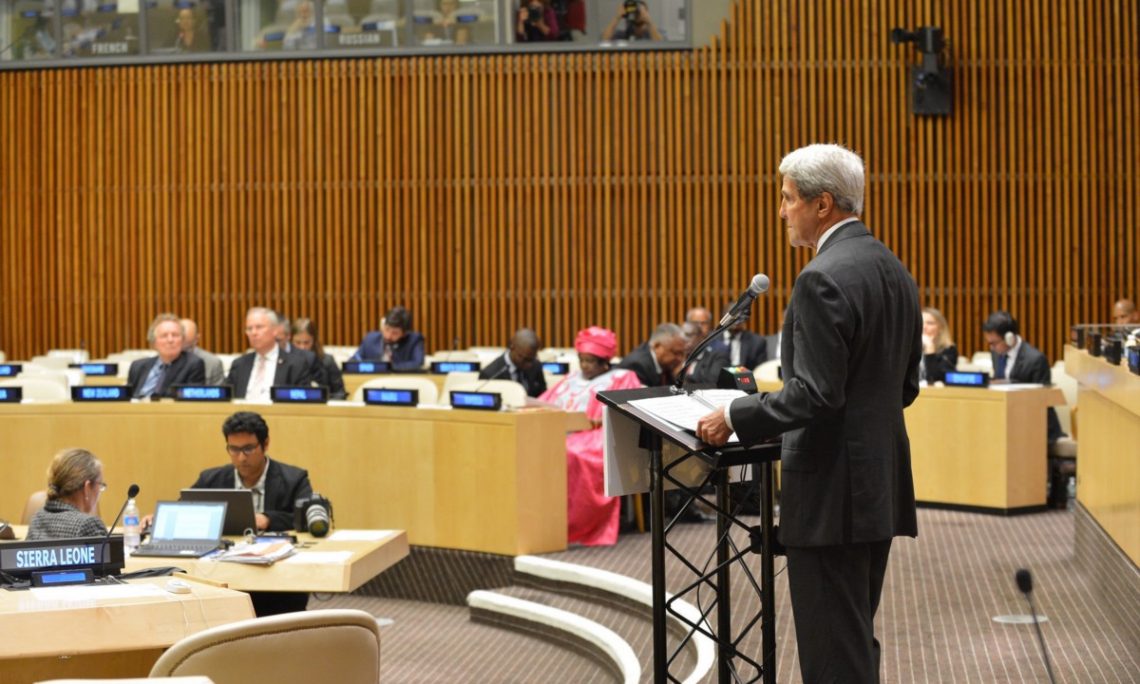 Good afternoon, Mr. Chairman. I apologize for being a little bit late. Even with a motorcade, traffic is hard. I want to applaud the United Nations for convening this very timely session on the largescale movement of refugees and migrants, and obviously, we all come here convinced that there should be no question that we all need to do more in order to help people who are fleeing persecution and violence. The Leaders’ Summit on Refugees – to be hosted tomorrow by the Secretary-General, President Obama, and the six partner governments – is designed to complement and to reinforce the Declaration for Refugees and Migrants that we are adopting today and to mobilize governments everywhere to increase their efforts to cope with what has become a global humanitarian crisis; in some places, catastrophe.

Make no mistake: Additional efforts are urgently needed. And as we meet, an estimated 65 million people have been forcibly displaced from their homes – including more than 21 million people who have fled across international borders.

It is in the world’s singular interests, best interests – and it is right – to ensure that people who desperately need a new home – whether in or beyond the boundaries of their own country – can actually find a place to live in safety, with food, medicine, school, and a time to plan for what comes next.

The task of providing such a refuge falls most heavily on those states that are directly embroiled in strife, their neighbors, and on the nations along nearby exit corridors. But the responsibility to assist is shared by all. So we have to do our part to try to end wars, to oppose violent extremism, to respect human rights, and to support policies that humanely and effectively manage the flow of people who are on the move.

The key elements of these policies are well understood. Working with UNHCR, we have created norms that honor the rights of refugees. We have established rules for political asylum, voluntary repatriation, resettlement, and local integration. And we have reaffirmed the principle that the impartial aid workers ought to be granted unfettered access to deliver emergency assistance to civilians who are trapped in areas of conflict. And we may even this afternoon have heard about an incident in Syria that flies directly contrary to that right.

To improve our capabilities, the United States applauds the decision this year to make the International Organization for Migration – ably led by Bill Swing – a part of the UN system. And this step avoids the potential for duplication of effort and it helps to concentrate funds where they will do the most good. We also call for the establishment of a special representative of the UN secretary-general for internally displaced persons – recognizing that the vast majority of people who are driven from their homes within their own countries. The plight of the internally displaced is not identical to that of international refugees, and it therefore requires special attention.

My colleagues, the world knows what it must do to respond effectively to the massive challenge that we face. But we have to apply the knowledge systematically and we need the resources to be able to do so before it is too late.

As President Obama will make clear at the Leaders’ Summit tomorrow, the gap between the funds that we have and the funds that we need remains enormous. Today, the United States remains the world’s largest donor of humanitarian assistance and refugee relief, and we are proud of that. But we would be even more satisfied if the need were ended. My country has now resettled more refugees through UNHCR’s resettlement program than all other nations combined. But we are far from satisfied about that too. On the contrary, we are determined to work with all of you to create more opportunities for refugees; to provide more fully for the special needs of women, children, and people in danger of persecution; and to furnish additional help to countries that are on the front lines of humanitarian crises. To these ends, and more, we ask your support and we pledge our own continued best efforts.