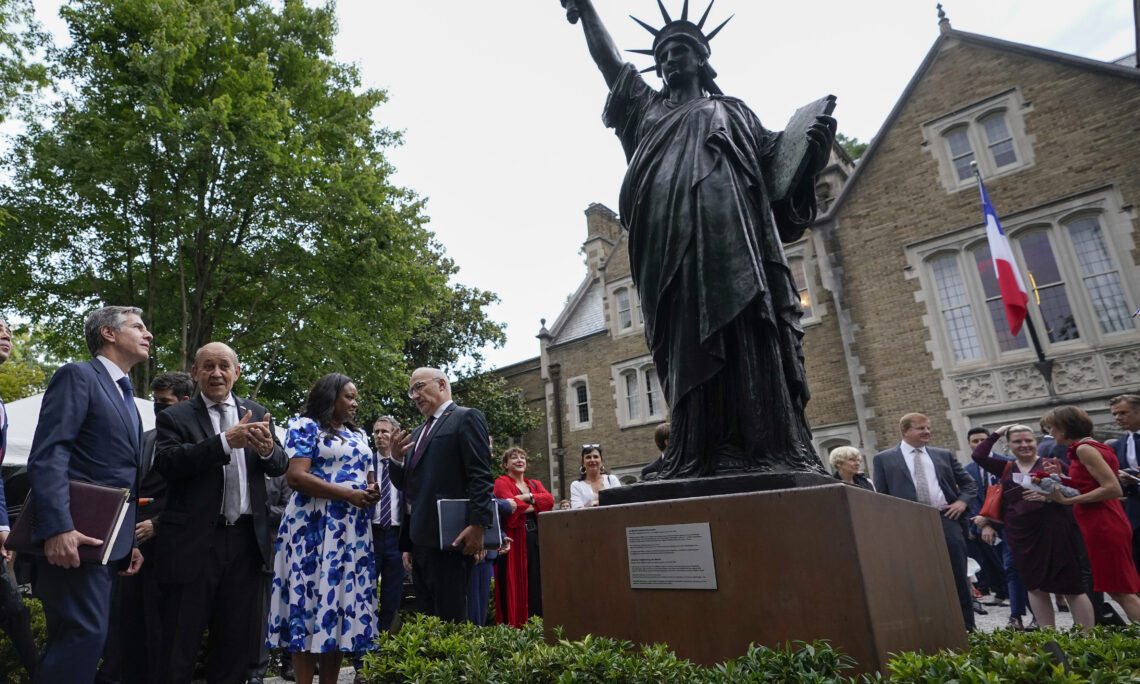 French Foreign Minister Jean-Yves Le Drian, third from left, and Secretary of State Antony Blinken, second from left, take part in an unveiling ceremony of an original Bartholdi model of the Statue of Liberty at the French ambassador's residence in Washington, July 14, 2021. (AP Photo/Carolyn Kaste

Secretary of State Antony J. Blinken met with French Foreign Minister Jean-Yves Le Drian yesterday in Washington, D.C.  Secretary Blinken congratulated Minister Le Drian on the occasion of France’s national day and the unveiling of a replica Statue of Liberty, an enduring symbol of French-American friendship, at the French Ambassador’s residence.  The Secretary and Foreign Minister discussed the climate crisis and agreed to form a bilateral partnership on clean energy.

The Secretary and Foreign Minister also discussed France’s troop reconfiguration in the Sahel and efforts to address the situation in Lebanon, including the urgent need for that country’s leaders to form a government committed to and able to implement reforms to manage Lebanon’s economic crisis.  They considered tools available to support democratic governance, peace, and security in Haiti following the shocking assassination of President Moise.  Additionally, they agreed on the need for joint U.S.-European efforts to stand up to Russian aggression and to address the People’s Republic of China’s human rights abuses, coercive trade practices, and aggressive foreign policy.  They also reviewed ongoing efforts to return to mutual compliance with the JCPOA.

The Secretary and Foreign Minister discussed how to build on 60 years of close partnership in space.  The Secretary invited France to join the United States in applying longstanding principles for the peaceful uses of outer space to advance safe and responsible space exploration activities on the moon and Mars through the Artemis Accords.