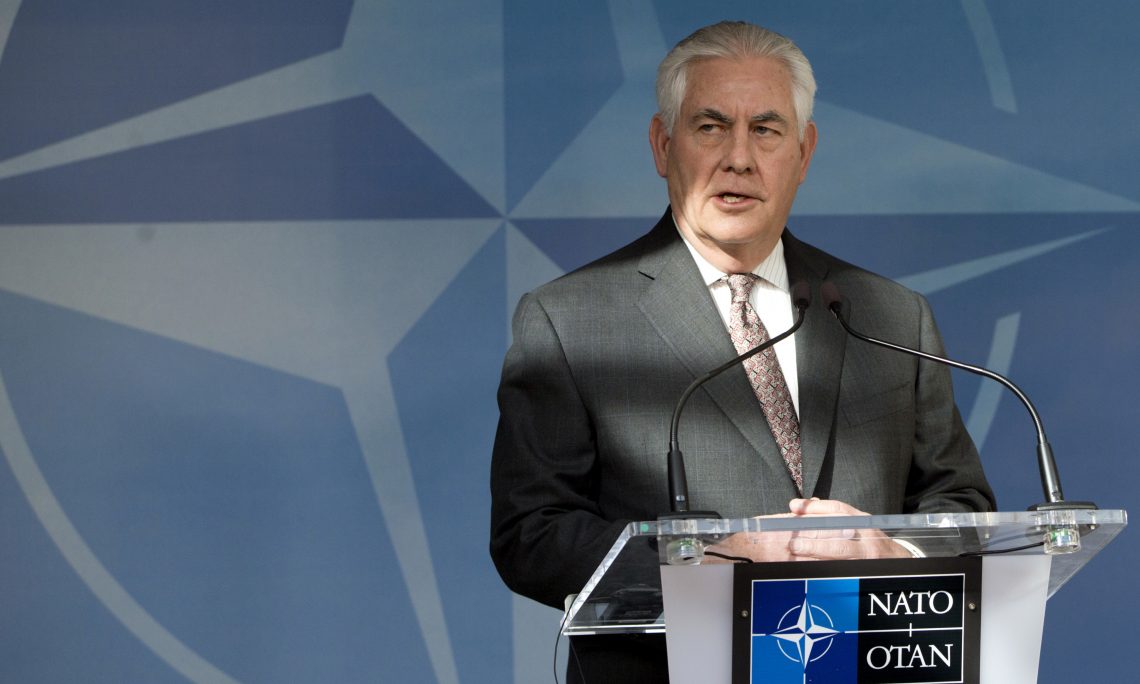 Thank you for the opportunity to represent the United States at this important meeting on Ukraine.

Three years ago, Russia’s aggression against Ukraine shook the very foundations of security and stability in Europe. Today, Russia’s ongoing hostility and occupation is compromising our shared vision of a Europe that is whole, free, and at peace.

American and NATO support for Ukraine remains steadfast. As we have repeated at every Ministerial and Summit since Russia launched its campaign of aggression against Ukraine, NATO Allies stand firm in our support of Ukraine’s sovereignty and territorial integrity. We do not, and will not, accept Russian efforts to change the borders of territory of Ukraine.

We thank Germany and France for their determination to find a diplomatic solution to the ongoing crisis in Eastern Ukraine under the Normandy format. We will continue to support their work to accelerate the implementation of the Minsk agreements. NATO solidarity is crucial to finding a political solution to this conflict.

We will continue to hold Russia accountable to its Minsk commitments. The United States sanctions will remain until Moscow reverses the actions that triggered our sanctions.

We note with alarm the escalating violence along the line of contact and the repeated targeting of civilian infrastructure by Russia-led separatist forces, which poses an elevated risk of humanitarian disaster.

We call on Russia to exercise its influence over the separatists to put a stop to the violence, end the campaign of attacks and intimidation against OSCE monitors, and facilitate the access they need to do their job.

The OSCE must be able to fulfill its mandate which included monitoring throughout the conflict zone and to the international border. And Russia must understand there is no basis to move forward on the political aspects of the Minsk agreements until there is visible, verifiable, and irreversible improvement in the security situation.

Crimea-related sanctions must remain in place until Russia returns control of the peninsula to Ukraine.

Even in the face of Russia’s aggression, Ukraine has accomplished a great deal domestically. We applaud recent reform successes, including anti-corruption efforts and pursuing necessary reforms to meet IMF conditionality.

The United States continues to urge Ukraine to redouble its efforts to implement challenging reforms, including uprooting corruption, increasing transparency in the judicial system, strengthening the banking sector, and pursuing corporate governance reform and the privatization of state-owned enterprises. We must continue to support Ukraine on its reform path.

It serves no purpose for Ukraine to fight for its body in Donbas if it loses its soul to corruption. Anti-corruption institutions must be supported, resourced, and defended.

Even in the face of ongoing Russian aggression, Ukraine is committed to an ambitious effort to reform and modernize its armed forces according to NATO standards by 2020.

We applaud the goals set out in the Strategic Defense Bulletin that President Poreshenko presented to Allies in Warsaw, and we look forward to its full implementation.

The United States will continue to support Ukraine in this effort. Since the start of the crisis, the United States has committed over $600 million dollars in security assistance.

In addition to our bilateral contributions, the United States committed $1.3 million to the Partnership for Peace Trust Fund on Small Arms and Light Weapons, and also contributed to the NATO-Ukraine Trust Fund on Countering Improvised Explosive Devises.

Russian aggression in Ukraine has not abated. This meeting is a clear demonstration of NATO’s political support for Ukraine. I encourage you to make that support tangible by maintaining solidarity on sanctions, and by contributing individually to NATO-Ukraine Trust Funds.

Together we will stand by Ukraine as it defends its sovereign territory, strengthens its economy, and continues to implement reforms. As President Trump has said, every country has the right to chart its own future, and we must help the people of Ukraine maintain that sacred right. Thank you.