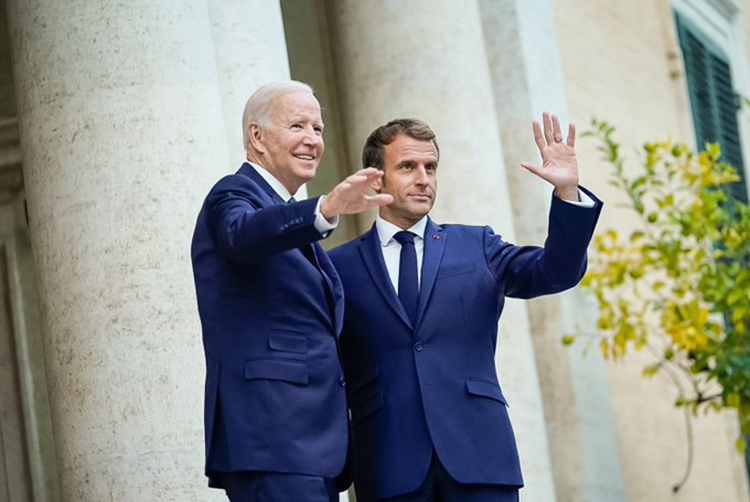 Today, the President of the United States and the President of the French Republic met in Rome on the margins of the G20 Summit to reaffirm their commitment to closer bilateral and transatlantic cooperation in the pursuit of peace, security, and prosperity around the globe. This meeting built on the in-depth consultations announced in their September 22 joint statement aimed at creating the conditions for ensuring confidence. They underscore the strength of the longstanding and historic relationship between the United States and France, underpinned by our shared democratic values, economic ties, and defense and security cooperation. They also reiterate a shared commitment to adapt and modernize our transatlantic alliance and partnership in light of global trends and in line with the depth of our bonds, common values, and shared interests. They resolve to ensure that democracy delivers for their citizens, to uphold the rule of law and good governance, to defend the human rights and dignity of all individuals, and to counter injustice and inequality.

From this foundation, the Presidents intend to work closely together – bilaterally and with other allies and partners around the world – to counter enduring and new threats. They share a commitment to systematic and in-depth consultation and coordination to ensure transparency, both bilaterally and in multilateral fora, including with NATO Allies and EU partners, on policies and initiatives that are of respective interest and have strategic implications. As France assumes the Presidency of the European Union during the first half of 2022, it will keep the United States closely informed of its priorities.

The United States and France acknowledge our shared responsibility to lead the development of global solutions in response to collective challenges, including continued U.S.-EU cooperation to strengthen the multi-lateral, rules-based order. Our countries will work to strengthen global health and health security, including efforts to end the COVID-19 pandemic and to build resilience against future pandemics. We will continue urgently addressing the climate crisis, including support for the aims of COP-26 to accelerate the global net-zero transition. The Presidents welcome plans to launch a “US-France Bilateral Clean Energy Partnership” by the end of the year. We will pursue a sustainable global economic recovery, based on a fair, inclusive, and rules-based global economy. As new technologies emerge, we will seek to ensure that norms and standards governing their use reflect our shared democratic values, while respecting our respective regulatory autonomy. In this regard, the two Presidents welcome the launch of the Trade and Technology Council as an important forum for enabling the United States and the EU to update the rules of the road for the 21st century economy. They also support a bilateral dialogue on the impact of emerging technologies on our economies and societies. The United States and France intend to intensify cooperation on space issues, which will be further discussed during Vice President Harris’ upcoming visit to Paris.

The Presidents resolve to maintain our collective defense and security, cultivate our resilience, enhance their solidarity, and ensure international stability in response to the full range of modern threats. The United States and France share the goal of continuing to bolster deterrence as a core element of our collective defense and to contribute to the indivisible security of the NATO Alliance.

The fundamental purpose of NATO’s nuclear capability is to preserve peace, prevent coercion, and deter aggression.  Given the deteriorating security environment in Europe, we reaffirm that a credible and united nuclear Alliance is essential. In light of this security environment, allies should continue close consultations on nuclear and arms control matters, particularly within NATO. We will work together to strengthen arms control, disarmament, and non-proliferation, as a key element of Euro-Atlantic security.

As noted in the September 22 Joint Statement between the two Presidents, the United States recognizes the importance of a stronger and more capable European defense that contributes positively to global and transatlantic security and is complementary to NATO. The United States supports European Allies’ and Partners’ growing investments in the military capabilities that enable our shared defense, given the benefit to transatlantic security of stronger European military capabilities and more committed European partners.  European-led missions and operations such as in the Sahel and in Bosnia are positively contributing to transatlantic security.

The Presidents reaffirm their support for strengthening the NATO-EU strategic partnership, which is unique and essential for the security and prosperity of our nations and of the Euro-Atlantic area. They support the invitation of the EU and other partners to the upcoming NATO Leaders’ Summit in Madrid in 2022. The Presidents also reaffirm support for a U.S.-EU dialogue on security and defense and work towards an Administrative Arrangement for the United States with the European Defense Agency, as decided at the U.S.-EU Summit in June.

The Presidents affirm the importance of stronger and interoperable defense industrial bases in Europe and in the United States, which will deliver better military capabilities, to the benefit of the Alliance. The Presidents intend to launch a U.S.-France defense trade strategic dialogue to foster a shared view on defense market access and export issues. In this context, the two governments will identify steps to improve the efficiency and effectiveness of defense export authorizations.

The Presidents recognize the importance of robust collaboration in the Indo-Pacific, particularly given growing economic and strategic challenges there. The United States welcomes France’s enduring role as an Indo-Pacific partner, whose long-standing commitment, geography, and military capabilities based throughout the region make it a key contributor and security provider to a free and open Indo-Pacific. The United States also welcomes the EU strategy on the Indo-Pacific and intends to continue robust consultations on its own strategy. They support further dialogue and practical cooperation with partners in the Indo-Pacific, noting the importance of combined efforts to support the rules-based international order and determine common approaches to global challenges. As France and other European nations increase their air and maritime deployments in the region, the United States intends to increase its support and material contributions to these deployments.

As conveyed in the September 22 Joint Statement between the Presidents, the United States and France will increase their cooperation in the Sahel. Accordingly, the U.S. has committed additional assets in the Sahel to support counterterrorism efforts led by France and other European states. The two Presidents have charged their teams with intensifying bilateral consultations – complemented by their respective ongoing collaboration with African states and organizations, as well as other European partners – with a view toward supporting a holistic and sustainable approach to the region. In addition, France and the United States will look for ways to strengthen multilateral support for the G5 Sahel, its member states, and MINUSMA.

The two Presidents commend the historic efforts of the Global Coalition to Defeat ISIS. They intend to strengthen coordination and cooperation bilaterally and with Coalition partners to maintain pressure on ISIS networks globally, including the continuation of relevant military efforts in Iraq and Syria to ensure the enduring defeat of ISIS. The Presidents understand the importance of reducing the ability of violent extremist groups or any country to threaten our citizens and our allies. They support essential reforms in Lebanon, concur on the need to ensure Iran never develops or acquires a nuclear weapon, underscore the importance of the November 12 Paris international conference on Libya in view of national elections there on December 24, and support the sovereignty and independence of Iraq while ensuring it never again provides sanctuary to violent extremist groups.