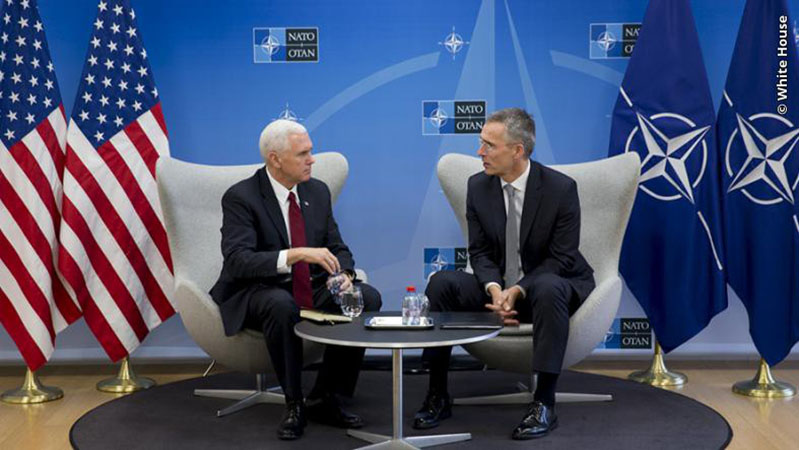 In remarks to the press following their meeting, the Vice President noted, “The United States has been a proud and faithful member of NATO since its founding in 1949. This alliance plays a crucial role in promoting peace and prosperity in the North Atlantic and, frankly, in the entire world.”

The Vice President underscored United States’ commitment to NATO as well as our common defense. “We’re about the process of strengthening our military and restoring the arsenal of democracy. Working with members of Congress, we intend to increase military funding to make it possible for us to provide for the common defense for the people of the United States, but also meet the obligations that we have with our treaty allies, including in this historic treaty,” the Vice President stated.

Reflecting on the 2014 Wales Summit, during which all 28 members of the NATO alliance declared their intention to move towards a minimum security investment of two percent of their gross domestic product on defense within a decade, Vice President Pence made clear that President Trump and theUnited States expect our allies to keep their word and to do more in our common defense. The Vice President said, “America will do our part. But Europe’s defense requires Europe’s commitment as much as ours.”

Noting that the rise of adversaries, both new and old, demands a strong response from NATO, Vice President Pence underscored, “the world needs NATO’s strength and leadership now more than ever before.” The Vice President continued to highlight a number of shared security challenges on which the United States and NATO must cooperate, includingthe situation in Ukraine and counterterrorism, among other issues.

The Vice President underscored that adapting to new and ever-shifting challenges must remain a central focus of our collaboration. Vice President Pence said, “We will work tirelessly with our NATO allies to ensure security in our countries and yours…Our alliance needs to intensify efforts to cut off terrorist funding and increase cyber capabilities. We must be as dominant in the digital world as we are in the physical world. And the United States is committed to continuing to work with our NATO allies to achieve that objective for the security of all the nations in our alliance.”

Looking to the future with optimism, the Vice President declared, “By building on tactics from the last century with these new century opportunities and challenges, NATO will be better prepared to confront and overcome the new adversaries of the 21st century.”

In conclusion, Vice President Pence said, “A strong NATO means a safer world. And the United States of America looks forward to continuing to work with our partners in NATO to achieve just that.”