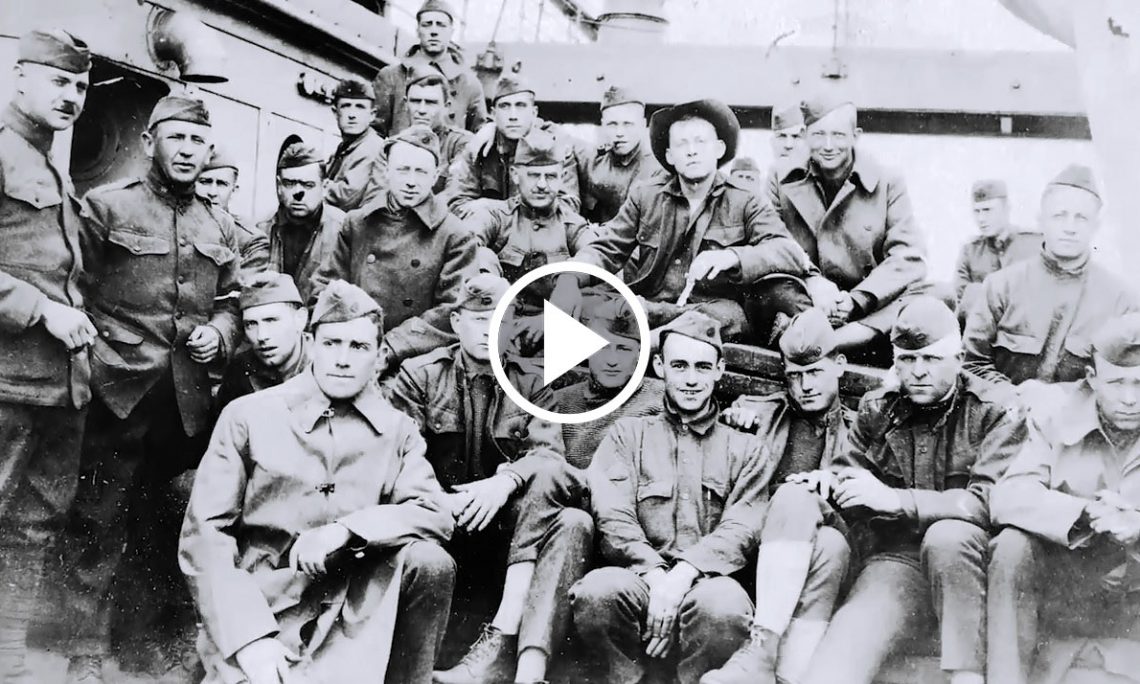 Transcript of the voice over:

They were called “Doughboys.” Then, as now, no one was exactly sure why. Like their name, their heroic deeds fade from memory. People and places etched in a thousand local memorials across our nation…seen, but seldom noticed. Faded monuments to a war that changed everything.

The Doughboys named it “The Show.”

We call it World War I.

In less than 2 years, some 4 million Americans would join the armed forces, many of them volunteers. In just six months of decisive combat, more would die than in a decade of war in Korea and Viet Nam, combined–with a higher casualty rate than World War II.

The nation would never be the same.

April, 1917. The United States enters the Great War. For two and a half years, France and Great Britain have been deadlocked in an epic struggle with Imperial Germany. Millions are dead, democracy threatened. Can America make the difference?

The U.S. military has war plans–but none include shipping millions of men across the Atlantic. Few troops have ever seen combat. The country that invented the airplane has but few–all obsolete. No tanks, no gas masks. Worst of all, the War Department hasn’t mandated the study of trench warfare–this education must be paid in blood.

Nonetheless, the nation would mobilize–and monetize–a stunning effort. In just 2 years, the American government would spend almost as much money as it had in its entire history prior to the war.

An 8-fold increase in steel shipyards. More than 2 million new industrial workers. And “Rosie the Riveter” had a mother–women became a major presence in the workforce, joined the armed services for the first time, and would have the vote a year later.

Doughboys came from every walk of life and all ethnicities. A resolute wave of African Americans…Native Americans, new immigrants, rawboned farmhands, Ivy Leaguers.

“Lafayette, we are here.” The American Expeditionary Forces–men of the Rainbow Division, the Buffalo, Ivy, and All-American. The Metropolitan, Prairie, and Red Diamond.

An English nurse watched them and wrote: “So these were our deliverers at last. So godlike, so magnificent, so splendidly unimpaired.”

And so timely. Americans entered the front lines in January, 1918. A Marine commander, advised to retreat by a French colleague, answered: “Retreat, hell! We just got here.”

These were warriors–frontline troops. Two-thirds of the AEF saw action, an amazing percentage.

They would fight 13 key battles, with names engraved in the American memory. Cantigny. The Belleau Wood. Soissons, St. Miheil, and the Meuse-Argonne, where a quarter million Doughboys led the first assault wave–vanguard of more than a million who engaged in the final, epic battles of the Great War. One was a Tennessee farmer named Alvin York–who almost single-handedly killed or captured more than 100 enemy solders.

Others who saw action included artillery officers named Truman and Hubble. One would later win a Nobel Prize and lend his name to history’s most powerful telescope. The other would become president.

No one on either side anticipated how quickly the Americans would arrive, engage, and decisively impact the War.

An Armistice was signed at the 11th hour, of the eleventh day, of the eleventh month of 1918. American power had stopped the killing. But even as the world celebrated, General Pershing said: “They never knew they were beaten in Berlin. It will all have to be done all over again.”

And so it would be…led by veterans named Marshall, and Patton, and MacArthur and the sons and daughters of others who fought and died in this enduring chapter of our perpetual battle for freedom.

By itself, World War I did not, could not, make the world “safe” for democracy.

Liberty must always be defended, strengthened and cherished.  Millions of Americans served this cause; 116,516 Doughboys made the ultimate sacrifice.

Today, in our nation’s capitol, every major American war fought in defense of freedom is honored with a national Memorial–save World War I.

The unprecedented sacrifice of Americans to conclusively end a world war is more than worthy of this recognition, long overdue.

On Nov 11, 2018, with your help, the World War I Centennial Commission will dedicate this Memorial in Pershing Park. It is time to honor their sacrifice and renew our pledge:

To protect our future…by remembering our past.