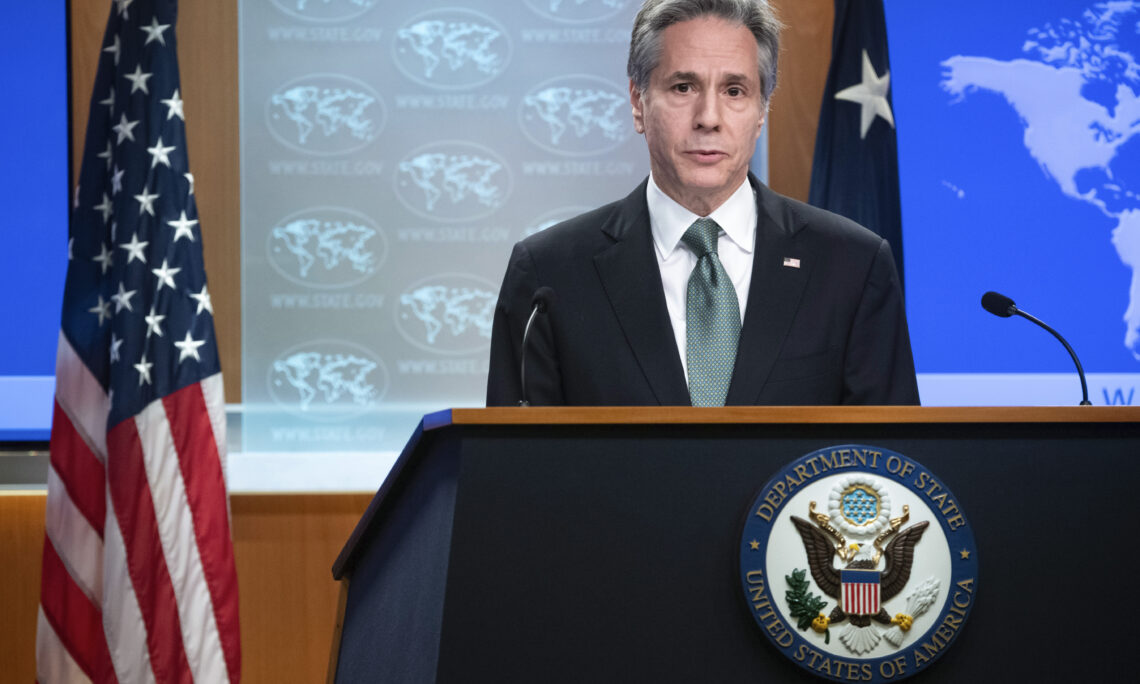 Secretary of State Antony Blinken speaks during a news conference Thursday, March 17, 2022, at the State Department in Washington. (Saul Loeb/Pool via AP)

Since launching his unprovoked and unjust war of choice, Russian President Vladimir Putin has unleashed unrelenting violence that has caused death and destruction across Ukraine.  We’ve seen numerous credible reports of indiscriminate attacks and attacks deliberately targeting civilians, as well as other atrocities.  Russia’s forces have destroyed apartment buildings, schools, hospitals, critical infrastructure, civilian vehicles, shopping centers, and ambulances, leaving thousands of innocent civilians killed or wounded.  Many of the sites Russia’s forces have hit have been clearly identifiable as in-use by civilians.  This includes the Mariupol maternity hospital, as the UN Office of the High Commissioner for Human Rights expressly noted in a March 11 report.  It also includes a strike that hit a Mariupol theater, clearly marked with the word “дети” — Russian for “children” — in huge letters visible from the sky.  Putin’s forces used these same tactics in Grozny, Chechnya, and Aleppo, Syria, where they intensified their bombardment of cities to break the will of the people.  Their attempt to do so in Ukraine has again shocked the world and, as President Zelenskyy has soberly attested, “bathed the people of Ukraine in blood and tears.”

Every day that Russia’s forces continue their brutal attacks, the number of innocent civilians killed and wounded, including women and children, climbs.  As of March 22, officials in besieged Mariupol said that more than 2,400 civilians had been killed in that city alone.  Not including the Mariupol devastation, the United Nations has officially confirmed more than 2,500 civilian casualties, including dead and wounded, and emphasizes the actual toll is likely higher.

Last week, I echoed President Biden’s statement, based on the countless accounts and images of destruction and suffering we have all seen, that war crimes had been committed by Putin’s forces in Ukraine.  I noted then that the deliberate targeting of civilians is a war crime.  I emphasized that Department of State and other U.S. government experts were documenting and assessing potential war crimes in Ukraine.

Today, I can announce that, based on information currently available, the U.S. government assesses that members of Russia’s forces have committed war crimes in Ukraine.

Our assessment is based on a careful review of available information from public and intelligence sources.  As with any alleged crime, a court of law with jurisdiction over the crime is ultimately responsible for determining criminal guilt in specific cases.  The U.S. government will continue to track reports of war crimes and will share information we gather with allies, partners, and international institutions and organizations, as appropriate.  We are committed to pursuing accountability using every tool available, including criminal prosecutions.