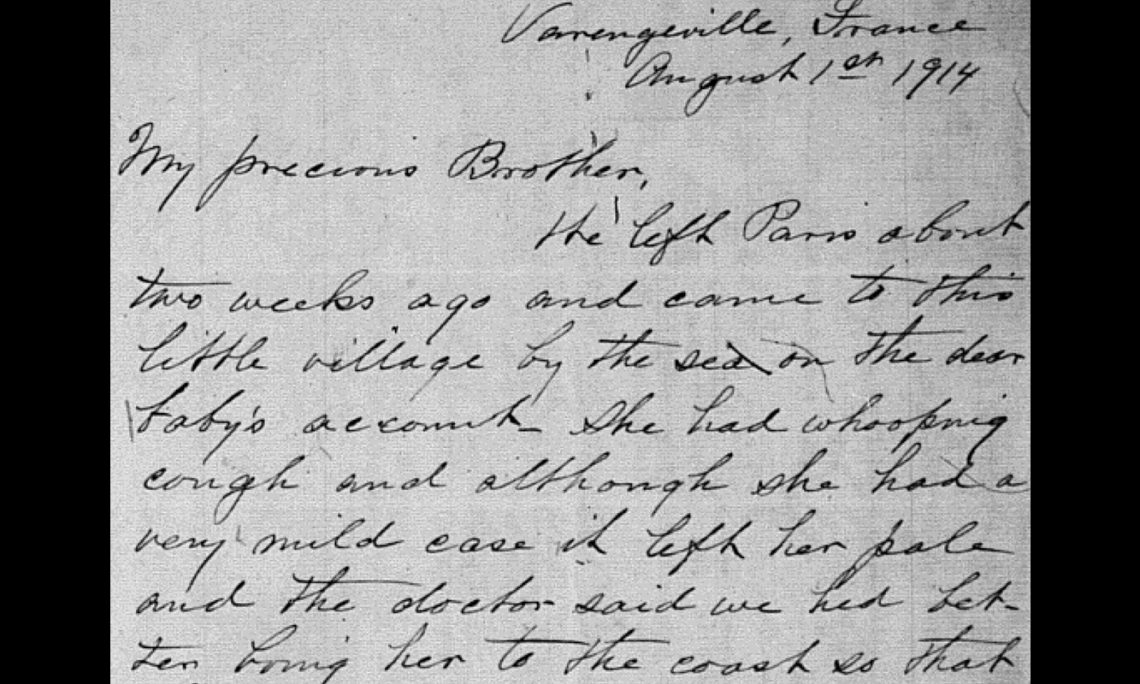 President Wilson’s sister, Annie, was one of thousands of Americans in France when war broke out in 1914 - Reel 60, Woodrow Wilson Papers, Manuscript Division, Library of Congress, Washington, D.C.

Stranded w/out money or shelter: thousands of American tourists descend on the embassy for help

Thousands of Americans in Europe were stranded as the Continent passed from peace to belligerency within a week of July 28, 1914.  The crisis was compounded by their inability to withdraw funds from French banks. Wealthy Americans were just as helpless as their middle-class compatriots. School teachers who saved their earnings to take a Cook’s travel tour were stranded.  So, too, was the sister of U.S. President Woodrow Wilson, Annie Wilson Howe.  Additionally, as France was the port of call for Americans stuck in Germany and Switzerland, thousands of U.S. citizens descended upon the U.S. Embassy in Paris in those early days.

Embassy employees and volunteers had to feed and house these displaced Americans, provide money for their living expenses, and organize transatlantic transportation. At one point, Herrick joked that the embassy functioned as a bank, relief society, and railway exchange rolled into one.[1]

Moreover, in order to comply with new French regulations, the embassy issued emergency passports and certificates of nationality. Previously, the only European countries that U.S. citizens required a passport to visit were Russia and the Ottoman Empire. Thus, the embassy went into overdrive and produced 4,500 new passports in a week.[2]

On August 2, Herrick convened a group of Paris-based U.S. businessmen at his residence at 5, rue François Ier. This committee organized U.S. volunteer cooperation with the embassy to secure money and transportation for Americans to return home.  Herrick appointed Judge E.H. Gary as Chairman and Hermann Harjes as Secretary. Other members of this initial committee included Laurence Benet, W.S. Dalliba, Charles Carroll, Frederick R. Coudert, James Deering, Chauncey M. Depew, Frank B. Kellogg, William Jay, and Percy Peixetto.  The committee worked on creating gold credits for U.S. citizens so that they could withdraw funds in France; creating a fund for U.S. citizens in need; getting U.S. citizens home, and figuring out how to best protect U.S. property and citizens in France.