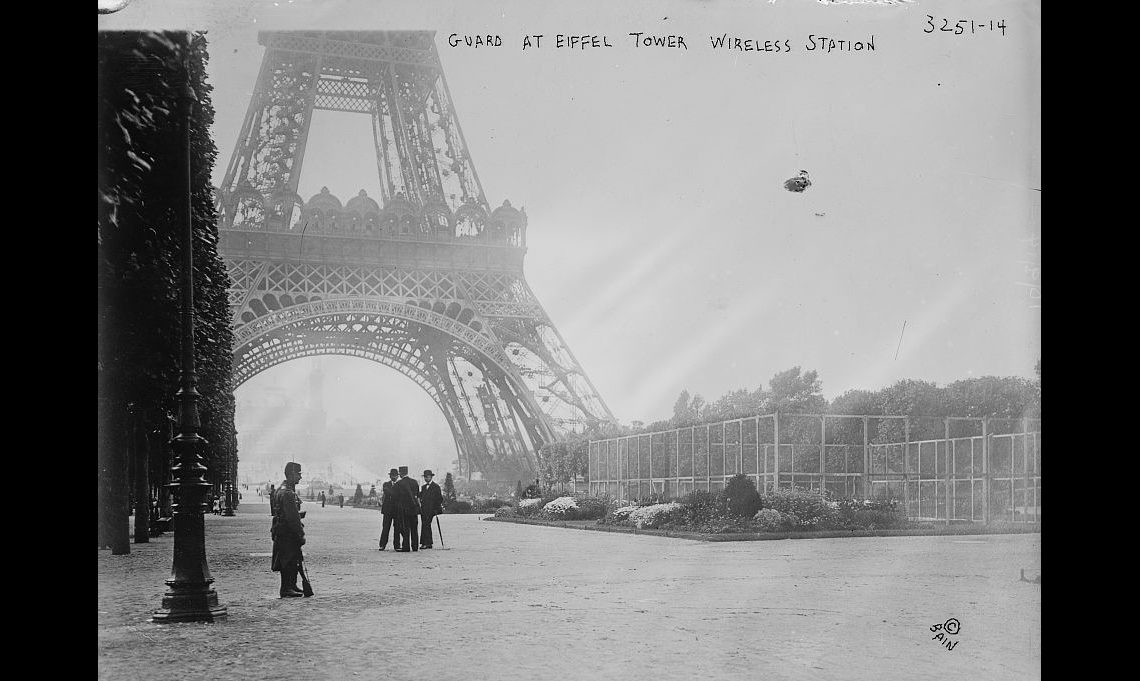 Photograph shows a guard at the Eiffel Tower, in Paris, France during World War I. (Library of Congress)

With France fully engaged in the war, life in and around Paris quickly changed.  Much of the city’s bustling life abruptly halted as men mobilized and shipped off to the frontlines. In their place, wives, daughters, sisters, and mothers filled the labor gap. Many shops closed, though those selling food and other daily provisions remained open. Several of Paris’ big hotels, devoid of guests and much of their staff, transformed into hospitals.

The Tour Eiffel, at the time one of the highest wireless masts in the world, was overnight turned from a “plaything of a decade ago” into a vital, strongly defended communications hub.[1] As the structure exchanged messages with Washington and St. Petersburg, many feared it might be subjected to attack. It was guarded against sabotage on the ground and encircled by a ring of heavy barbed wire, while a system of anti-aircraft guns defended the towering structure from German airplanes and zeppelins.[2]

Another protective measure undertaken by French officials was imposition of an 8pm curfew and blackout. Embassy attaché Eric Fisher Wood wrote on August 4, 1914, that “all night the beams of searchlights comb the sky for invaders and cast a tragic reflected glow upon the city beneath.”[3]  Later that month he relayed that,

“It is an uncanny experience to walk through a great city which is absolutely dark. The Champs-Elysées is probably at present the darkest avenue on earth. All those monumental lamp-posts which used to stand like beacons in the midst of the stream of traffic now shine no more. The sun seldom rises without revealing the ruins of one of these lamps and of an automobile, the two having mutually destroyed each other in the darkness.”[4]