Home Page d'accueil | News & Events | World War I Centennial Series – Where Were You When War Broke Out? 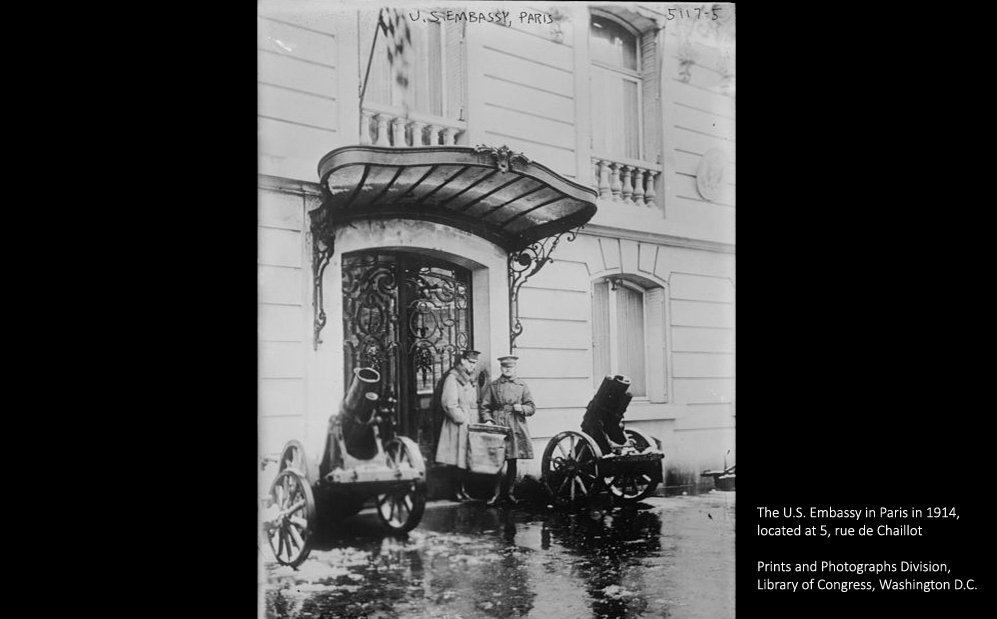 The U.S. Embassy in Paris in 1914, located at 5, rue de Chaillot Prints and Photographs Division, Library of Congress, Washington D.C.

The outbreak of July 28-Aug 4 1914 took everyone by surprise – many diplomats were on home leave or en route to the U.S.

At 5 pm on July 28, 1914, U.S. Ambassador to France Myron T. Herrick hosted a reception for a group of U.S. businessmen from the Chicago Railways Terminal Commission and the Commission of Municipal Executives and Civil Leaders as well as local Parisian officials.  The event, held at Herrick’s rented residence at 5, rue François Ier (owned by the Count de Ganay), was to be one of his last official duties prior to presenting his recall letter and sailing for home. The fête came to an abrupt halt later that evening with the arrival of Embassy Secretary Robert Woods Bliss, fresh from the Quai d’Orsay, who imparted news of the Austro-Hungarian declaration of war on Serbia.

The announcement came at a time when many U.S. diplomats and consuls, including some ambassadors, were in transit to the United States for home leave. The U.S. Vice Consul at Paris, DeWitt Clinton Poole Jr., made his way to his father’s home in Madison, Wisconsin, just hours before he was summoned to Washington and dispatched back to Paris.[1]  U.S. Ambassador to Italy Thomas Nelson Page was in Paris on his way across the Atlantic when he received instructions from the Department of State to cancel his leave and return to Rome.

Eric Fisher Wood, a 25-year old student at the École des Beaux Arts, noted that on July 28, “the atmosphere of the city became so surcharged with excitement that to persist in study was difficult.”[2] A few days later, on August 4, Wood went to the U.S. Embassy at 5, rue de Chaillot and volunteered his assistance. “I was put to work with such suddenness,” he wrote, “that no time was spent in determining my official status. I cannot say whether I am the doorman or an Attaché. At present the duties of the two seem to be identical.”[3]