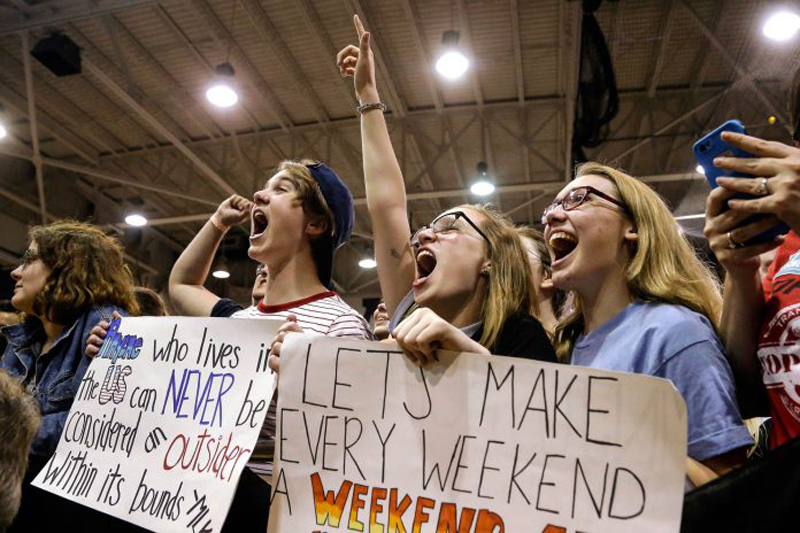 People cheer at a campaign rally in St. Louis in March. (© AP Images)

The generation of Americans known as millennials, most of whom are between the ages of 18 and 35, has surpassed the baby boomers (ages 52–70) as the largest living U.S. generation.

And that has some political pundits saying that the 2016 presidential election hinges on whether the millennials show up to vote.

As almost all of them have reached 18, the age at which Americans are eligible to vote for president, the generation has nearly caught up to the boomers when it comes to their share of the American electorate.

An estimated 69.2 million millennials are voting-age U.S. citizens — a number close to the 69.7 million baby boomers in the nation’s electorate, according to a 2016 Pew Research Center analysis of U.S. Census Bureau data. Both generations comprise roughly 31 percent of the voting-eligible population, Pew says.

Still, Beatriz Cuartas, deputy director of George Washington University’s graduate political management program, has faith in her students and their peers. “I know that millennials are trustworthy, and they will do the right things for their own country,” she said, “because whatever happens now, it’s their future.”

Civic participation by young people will affect the futures of many other countries too, especially in the developing world. Countries in Africa, South Asia and Latin America typically have younger populations than the U.S.

The median age in the U.S., for example, is 38. But several African countries have median ages in the teens, with Niger and Uganda at the low end, with a median age of 15. Countries in South Asia also are young — Afghanistan’s median age is 18; Pakistan’s, 23; and India’s, 27. In Latin America, median ages cluster in the 20s, with Guatemala’s at 21 and Brazil’s, 31.

Cuartas said that in the U.S., millennials already are influencing this year’s presidential election through social media. Whether it’s on Facebook, Twitter, YouTube or Snapchat, even students are “helping decide the election.”

Afshan Mizrahi, 23, says she’s definitely voting in November, as are many of her friends. “A lot of changes are going to affect us, so it’s important we have a say in what’s going to happen,” Mizrahi said.

This article draws from a Voice of America article.